Swedish Ballet is Dancing Forward in the French Style The director of the Royal Swedish Ballet Nicolas Le Riche (leading the company since 2017) certainly does not deny his origins. The former étoile of the Paris Opera, one of the best dancers of his time, carries forward the torch of French elegance and innovation in ballet. That was confirmed by the new double-bill titled Dancing Forward which opened in February 2019. Within one evening, two very different pieces by French choreographers were presented: Suite en blanc by Serge Lifar and Je t’attends je t’attends je t’attends by Jérémie Bélingard. While the first work is one of European balletic milestones of the 20thcentury, the other one had its world premiere. And while the first choreography represents a summary and celebration of classical academic technique, the other piece uses contemporary dance expression and aesthetics. However, there is at least one thing they have in common: they focus on dance in its pure form that offers beautiful images and tickles our imagination.

These three words summarize not only Lifar’s famous Suite en blanc, but also the general idea of classical ballet. This one-act piece was created in 1943 for the Paris Opera Ballet (though premiered in Zurich), to the music from the 1882 ballet Namouna by Eduardo Lelo. Lifar conceived it as a virtuoso showpiece, but it was also a starting point for experiments in the neoclassical style which became truly famous due to Balanchine’s ballets and numerous works created in the same spirit. As Erik Näslund writes in the programme note to Dancing Forward, Lifar was “modern on a traditional basis”. Indeed, from today’s perspective the Suite does not seem revolutionary but the very fact that the choreographer chose to emancipate the “white act”, usually placed within a narrative ballet, was unusual, if not totally new (for example, Fokine’s Les Sylphides employed a similar pattern). Lifar aimed to emphasize the independence of dance/classical technique that is able to stand for itself and to excite and fascinate audiences.

Suite en blanc does not follow any storyline, but the dance numbers certainly do not lack character, despite the fact all the dancers wear unified white (and black - for some of the men) costumes. Lalo’s music is rather expressive, resembling other late 19thcentury ballet music librettos with its mazurkas, Russian or Spanish dances… However, without the stereotypical costume and ‘balletized’ folk steps, dance becomes more abstract and the spectator can look for other interpretations, or just enjoy the pure beauty of the variations.

After the curtain rose, the whole ensemble stood on stage in a symmetrical tableau that soon dissolved into measured steps danced to the playful tones of Lelo’s music. Series of entrées followed, featuring trios, solos, duets, accompanied by the action of the corps de ballet – no less demanding. The work condenses ‘the best of’ and ‘the most difficult of’ classical variations, including numerous fouettés en tournant for women, multiple tours en l’air for men, high and fast jumps, long balances… all to be executed with elegance and in a very composed manner. The dancers of the Royal Swedish Ballet performed this probing piece with exactly that strictness, lightness, and elegance it demanded, proving the qualities of their academic technique.

The art of waiting

Nicolas Le Riche stages not only 20thcentury classics (the last premiere consisted of works by Jiri Kylian and Angelin Preljocaj), but he enthusiastically supports new creations. He picks emerging choreographers (so far mainly Europe-based), gives them freedom and means to develop new ideas and to experiment, and he generously supports their creativity. In this way, he aims to challenge the company and provide it with new impulses. Previously this season, he offered this opportunity to the Slovak choreographer Lukas Timulak, this time he has called in a fellow ex-étoile from Paris Opera, the multitalented Jérémie Bélingard. The charismatic French choreographer unveiled his work process with the dancers to some of the spectators during an open rehearsal and in a pre-premiere discussion. His job, as he said, is to generate ideas, work together with dancers and other artists and to create a dialog.

The general concept of the piece called Je t’attends je t’attends je t’attends is the act of waiting – some kind of in-between timewhen we just hang on, think, dream or imagine all possible scenarios. A lot of choreographic material that Bélingard assembled along with the dancers was indeed generated through improvisation on given themes. It was then arranged and placed into the scenographic universe by the Spanish artist Blanca Miró Skoudy. Her design consisted of rather surrealist scenic objects and costumes, full of possible symbolism. Each of the costumes was original and they often became crucial motivations for the dancers’ movements and inner stories.

In the geometric stage decor, consisting of waves, circles, cones and triangles, the human shapes of a hand and an eye seemed to dominate the scenery. For instance, Jérôme Marchand was equipped with a very long right armwhich could symbolize a handicap (judging by how unhappy he seemed about it), and which determined most of his movement choices. Daria Ivanova, another of the seemingly leading characters, wore a long black dress with beige gloves attached all over it, which produced another disturbing image. On the other hand, a carnivalesque creature in a shredded-like overall and a three-faced red mask (Anton Valdbauer) jumped around the stage and brought another mood and quality, underlined by his softly meandering movement. Altogether, the stage was populated by twenty dancers, each of them telling their own story, while being part of the whole and interacting with the intriguing scenography and suggestive music.

For the spectators, all the stories and meanings remained hidden, which opened channels for fantasy and personal interpretations. Or, like in Suite en blanc, they could simply enjoy the visual feast of interesting objects, costumes, surprising associations, and beautiful movement. The choreography used eclectic music by Vacarme, Christelle Lassort andCarla Pallone, performed by the wonderful Royal Opera orchestra conducted by Philippe Béran.

The new double-bill Dancing Forward is both ambitious in pushing the dancers’ technical and creative capacities, and pleasingly open in leaving the dance speak for itself and challenge the audiences’ imagination. We need to approach this program with an open mind – if we do so, we will be rewarded by plenty of aesthetic and intellectual impulses.

Written from the premiere held on 15 February 2019 at the Royal Swedish Opera, Stockholm. 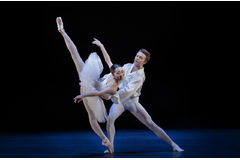 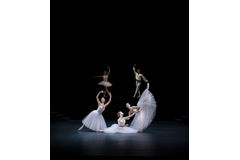 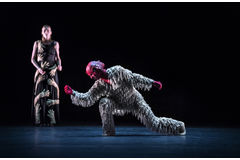 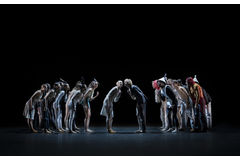