A Room by the Sea - A coffer full of sighs

A Room by the Sea by Yeh Ming-Hwa was presented at Oktoberdans Festival 2022 in Bergen. The choreographer takes momentary dives into the stories of female icons from dance history. In this process, she also opens up the coffers of the movement histories in her own body as a dancer and choreographer trained in Taiwan. This performance is a summation of her ongoing research project called SHE. A Room by the Sea. Photo: Thor Brødreskift.

Could there be a better place to tell this story other than in a room by the sea? Along the coast of the North Sea, we gather at Bergen Kjøtt to watch the solo performance A Room by the Sea. Taiwanese choreographer Yeh Ming-Hwa brings us snatches of moments from other sea shores. Arrivals and departures at sea, and a woman with a suitcase in hand are recurring motifs in the performance.

In one moment, Yeh walks slowly across the performance space, with her slight frame clad in a pale white gown. Her hair is tied in a severe bun and she carries a suitcase in hand. The sound of her block-heeled shoes knocking on the wooden floor echoes ominously. Her gait and posture appear at once decisive and labour-some. When she disappears behind a wooden screen, my eyes are drawn towards the expansive video projection that suddenly flicks on. The video shows Yeh walking across the length of a sandy beach, with the same suitcase in hand. Her stroll and the recurring sea waves, amplify the sense of passing time. Later in the performance, we encounter another woman who stands at the sea harbour, looking emptily into the distance. We learn that she waits there every day without speaking to anyone, only to return the next day. Who are these women and what do they carry in their coffers? 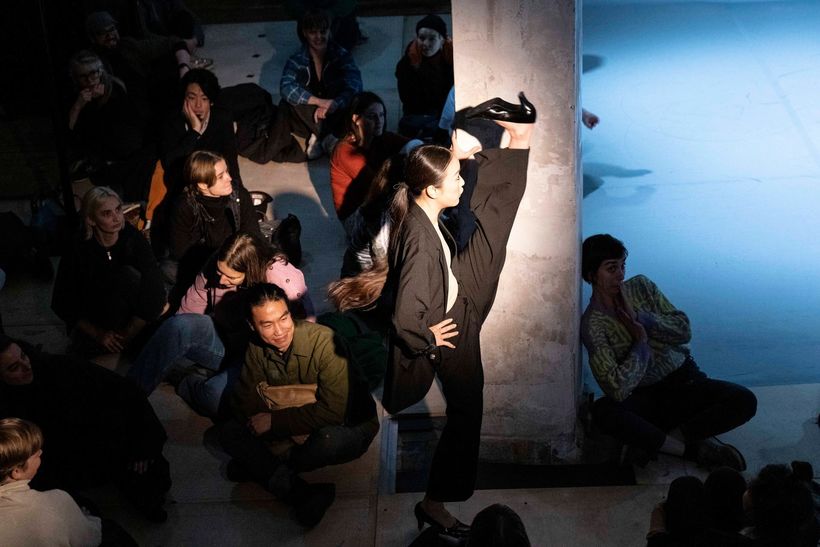 A Room by the Sea introduces the audience to women whose lives are thrown askew by the events around them in 20th century East Asia. In particular, they are women whose lives have been touched by dance, and who themselves marked dance history in prominent and quiet ways. We encounter them through Yeh’s gaze and voice, with the performer often becoming these characters by embodying them. Some of whom we meet are the aging Japanese Geisha Yokohama Mary and a young hopeful ballet dancer in admiration of Margot Fonteyn. We also encounter a Classical Chinese dancer while being told the story of Wang Zhaojun, known as one of the four beauties of ancient China. A Butoh dancer pursuing the footsteps of Yoshito Ohno also briefly manifests on stage. Some of them are Yeh herself, and some are dance icons she relates her own journey to. A montage of movement, speech, objects, video and live projections are used to narrate their tales. Japanese Imperialism, Taiwan’s subsumption into the People’s Republic of China, the Second World War and the carnage of its unravelling set the background for what impacts the region and the choreographer’s dance landscape to this day.

The performance then becomes an autobiographical unpacking of these dance languages and Yeh’s relationship to them. She executes a series of high straight-legged kicks from Classical Chinese dance, and weaves in her balletic poise. She breaks apart this movement repertoire with Butoh, and also leaps across the room with free abandon. Newspaper clippings and photographs of ballet shoes from an old journal are displayed as whispers of childhood dreams. Yeh’s series of changing costumes speak of several movement traditions that are shaped by the complex geo-political location of Taiwan. Each corner of the vast polygonal performance space, opens a new room to a dance history with a different dancer. No! To be precise: female dancers. I viewed these women with suitcases as people who held a monumental repertoire of dance traditions – a cherished means of self-expression that also becomes their burden. Later in the performance, the walking female figure in the video is shown limping, her ankles buckling with each step, and yet holding on to the suitcase. On stage, Yeh shuffles forward as her shoes are replaced by tea cups. The ringing sound of delicate porcelain on the floor sharply pronounces the gendered constraints of her dance icons. 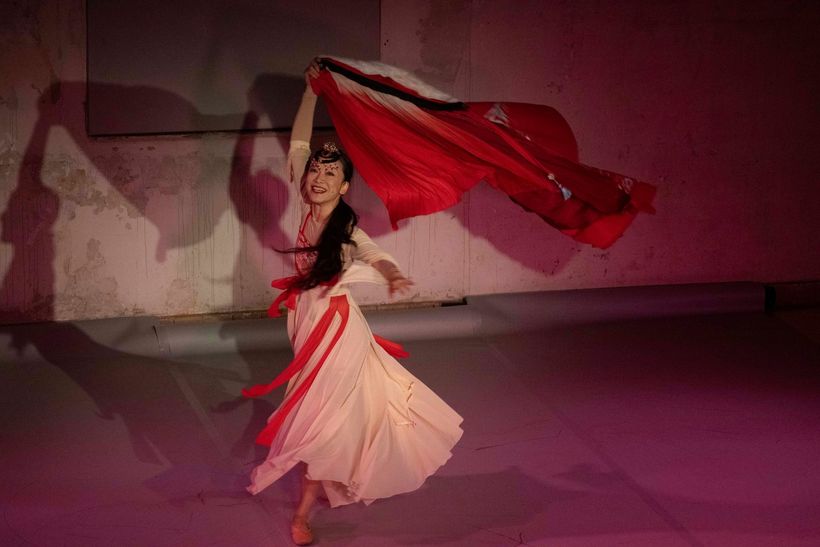 The characters seem to be afflicted by the passing of time, as well as stuck in a moment. Yeh communicates this conundrum strikingly with her highly emotive facial expressions. Her eyes and forehead undergo subtle movement that nonetheless display a swirling recollection of memories. Yeh’s expressions plot the mood of the performance, ranging from grief and pensiveness to cheeky self-confidence, wonder and flirtatious laughter. This rich use of facial expressions is a refreshing change from the “neutral” facial expression of most European contemporary dance creations.

In stitching together shallow dives into dance histories, A Room by the Sea sometimes feels like drowning in excess. Narratives leaping across time and space, create a disjoint within characters. Yeh’s arrival in a crisp formal black suit introducing herself with a smirk on her face feels at odds with her mute departure in the end, cloaked in a long shimmering shroud. Constantly switching between different mediums, is tantalizing but also suffocates my attention and ability to be immersed in any character’s journey. Yeh has to frequently change costume, makeup and hair for every character while delivering monologues and executing movement on cue. All this with the audience often half-sitting on the props! Handling these technical conditions designed into the production feels like a hectic responsibility. 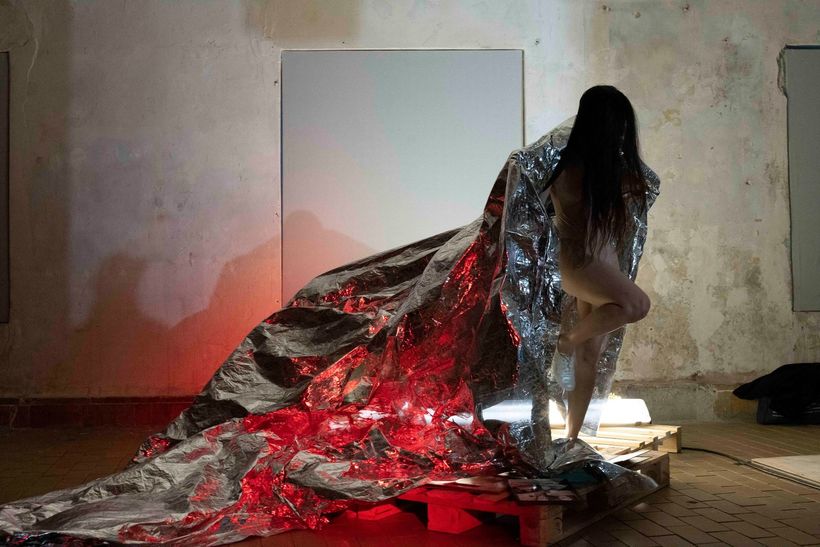 However, I find myself more engaged when Yeh Ming-Hwa is exploring movement without being concerned with these demands. She runs across and around the vast space with a long piece of fabric held aloft in her hand. And up it flies! As she weaves among the seated audience, the glittering fabric floats over our heads in a wave-like motions. I find a sense of lightness, joy and freedom in Yeh’s movements when she throws the fabric, tramples it and spins it around her feet. Sometimes getting stuck within its folds, her movements become jerky. But Yeh finds her way around it with the fabric always in tow. The spectator-oriented presentation of forms from earlier in the performance, shift to an inward-looking quest for a personal movement language.

The experience of having been in all the metaphorical sea-view rooms infect her body. She appears to choose from her coffer of dance histories with savour and at will. Her hair is no more in a bun but let to flow loose. The suitcase is now open. Not a mysterious burden anymore, perhaps a Pandora’s box of jerky discoveries.

Written from the performance of ‘A Room by the Sea’ at Oktoberdans 2022 in Bergen, Norway.