Can you come down and fetch me? Snow edition – Memory of a Touch

The Norwegian dance group, Kartellet, created a video version of the 2014 performance Can you come down and fetch me? Initially, this performance was presented in front of an audience: this time, we watch it through a handheld camera, filmed in March 2021 by Carl Christian Lein Stormer in one take, in black and white. Can you come down and fetch me? Snow edition (Inge Martin Helgesen and Sigurd Johan Heide). Photo: Kartellet.

A snowy landscape and four performers set the eerie scene where the drama takes place. A pianist, Benjamin Mork, plays a contemplative melody. Around him, a circle is formed in the snow. A woman stands still, a man, Inge Martin Helgesen, dressed in a black suit seems to walk around, while another one, Sigurd Johan Heide, arrives running to enter the circle. There is an important addition to this on-screen version of the performance; there are not only male figures, the two dancers and the pianist, but also Emma Elliane, who partially participates in the dance performance, and also sings Sami joik with her dreamy voice. There is not a linear storyline in this performance; it’s more about the dynamics of the meeting bodies, and the attunement of different elements – silence and music, immobility of the frozen nature and warmth of the moving bodies, ferocious games and intense embrace.

The gesticulations of the two dancers and their flow of movements highlight the immobility of the snow. The two Beckettian figures of the dancers are dressed in black suits, like Estragon and Vladimir – they move, they stand, confirming each other’s existence in an abstract space. The handheld camera follows them, playing with the bright natural light, creating an evocative atmosphere. Each frame is malleable, capturing the flowing motions of their bodies. Music and silence are in a constant dialogue throughout the performance. Nostalgic piano music; the switching tempos of the melody, the sound of the performers dancing on space, interrupts the silence of the frozen landscape. 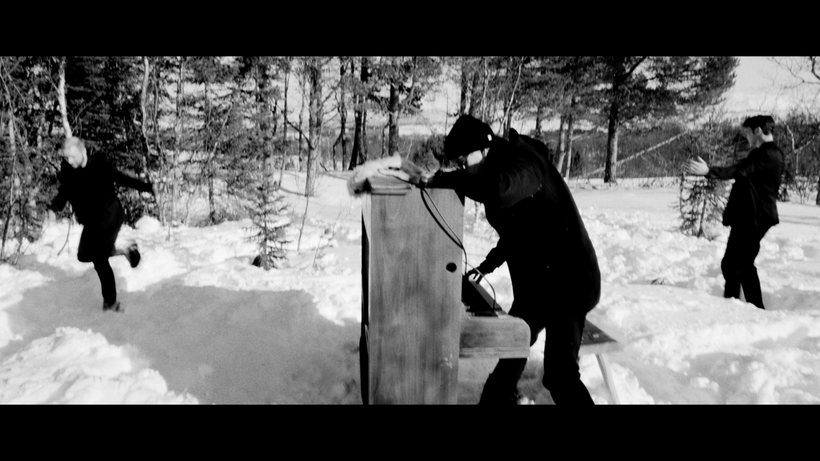 The two dancers adapt the ‘circling’ of Norwegian traditional dance and bring it to a new context – one of the main characteristics of Kartellet’s aesthetics. When the performers dance in a circle around themselves, they appear like celestial bodies. Their circular dance is repetitive, but not a monotonous recurrence of the same. At the point when they dance in concentric circles around themselves, they incorporate a different tempo of walking around, one slower, the other faster, they shift their weight, their balance. Minimal movements and intense facial expressions. Their approach is a conjunction between rhythm and repetition which leads to the dynamic creation of differences. It entails the rupture and the constant modifications of their movements. They move freely within the circle, dancing alone or together.

This frozen circle reminds me of the Deleuzian analysis in his book ‘Logic of Sensation’ about the round areas that Francis Bacon places his Figures on his canvas. In his paintings, Bacon intensifies the plasticity and the immediacy of sensations of human bodies, which have a principal role; there are the elements of violence, agony, enigma, irony, battle. He situates his figures on canvas using techniques of isolation, such as to set the figures in parallel layers of ice or glass, or to put them inside a circle in order to create new spaces (lieux). According to Deleuze, of utmost importance is that this isolation does not imply immobility – rather it recommends a sensitive procedure of an exploration of the figure, and it constitutes an “operative field”. These round spaces are not delimited, but rather open up a space where the drama of the figures take place. In Can you come down and fetch me again?, there is likewise a dynamic relation between these fields and the figures, the round spaces press the bodies, and the bodies are trying to surpass them.  The two performers move within the round shape engraved on the snow, and in a way, this frozen circle creates the canvas where their bodies try to flee, to detach. 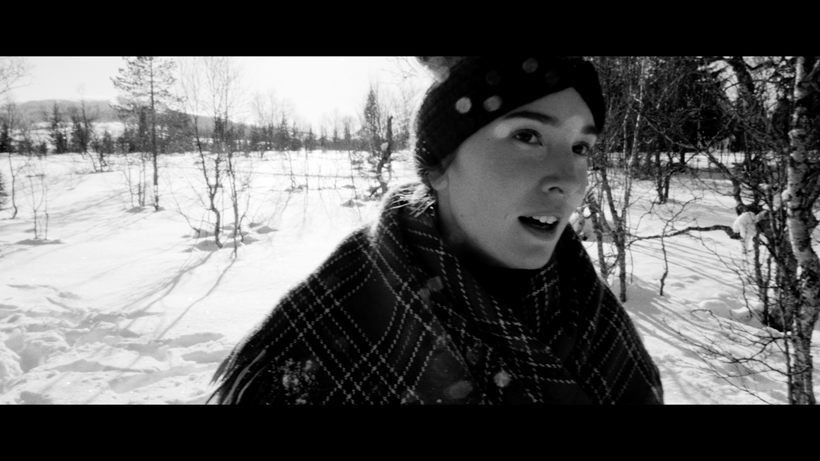 Their choreography is tangible, and it encapsulates the brutality of human nature but also the gentleness and kindness. There is something fleshy in the depiction of their bodies. The camera does not only capture the body’s motions, but also a sense of materiality of movement, the sound of clapping hands, the sound of their breath, the sound of their hands trying to warm. We see a performance which does not narrate a story, does not explain the reason why they are in the same frozen space, the same ‘canvas’ or what their relationship is. But the key is the end of the performance, which resonates with hope. The two dancers dance, hugging each other to the soothing piano melody, followed by a long take of an affectionate hug between the dancer and the joiker. This long shot gives the space and time for the figures to unfold their complexity, to disintegrate into the snowy environment. The violent movements give place to the tender gesture of a hug. Hands that tend to each other express the need of physical touch. In a period of physical isolation and social distancing, this screen dance manages to achieve and create an ode to the sense and need for touching.

Review written during the workshop Writing about dance (in the Time of Corona), organised by the project Dance and Performing Arts Criticism in Europe, supported by EEA Grants 2014-2021.