Gemini Horoscope for October 21 2022: “Today, your nervous system is being refurbished; it's about time. Expect some sudden fatigue. The best thing, in fact, would be if you could rest, as your body requires a concentration of energy to do the work.”
​Resting during the Oktoberdans festival? No way. So, I go to Hordaland Kunstsenter, to find some form of comfort to combat this underlying fatigue. Rita Maria Muñoz Farias and Carol Stampone come to offer us a diptych form that emanates from a series of workshops held beforehand. We will therefore see a work in progress, which, I learned afterwards, isn’t part of the Oktoberdans festival programming.

I have deliberately chosen not to consider the theme and the questions developed during these workshops in order to discern the essence of these two proposals.

So, the audience arrive in a narrow, bright, almost immaculate white and grey space, divided into two distinct areas. I decide, without knowing why, to sit near the emergency exit opposite the entry point. This is crucial information!

The space is divided with a set of mirrors and a mound of old sheets on the one hand, and on the other hand another stage space confined to the corner of the room with a scenography of a children's room strewn with fresh earth and decorated with a garland of dried flowers like a dreamcatcher used for protection.

The first part starts with Rita Maria Muñoz Farias's work and very quickly the two performers turn into two living quilts. I then remember that this morning I forgot to make my bed.

The shape of the bodies disappears under a mass of fabric, and, in the end, what is the point of revealing bodies in a choreographic festival?

Here, a museum work that expresses a form of nuptial dance between two duvets eternally stuck in a washing machine; a bit like peacocks, but with less elegance. In addition, there is a screen from which a list of ingredients emerges... a shopping list? The silence becomes heavy, the concept struggles to interest, so that after a few minutes I start to stare at the emergency exit. Were the dreamcatchers just a marketing joke? 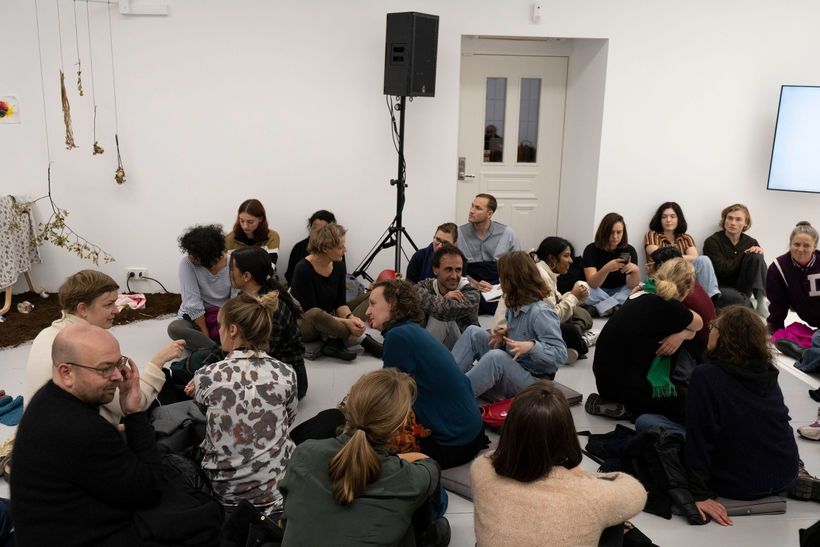 Out of curiosity, I press the door handle to see if the prospect of evacuating myself from this space would be a dream or a reality. The door is closed. (An inner scream.)

This first attempt ends as it started: like a bad night under the duvet, barely 25 minutes and I am already tired. I look at the faces of the audience in the reflection of the mirrors, it is sad to see. There is no glint in their eyes.

Speaking of glimmers, have you noticed how nice the weather is in Bergen this October? In that respect we are lucky. I'm sure it helps my nervous system.

Carol Stampone’s sumptuous set design appears in a muted light. Everything announces a dream that is finally accessible.

The performer begins to tell a story to her imaginary child, I rant inside, secretly wishing to see an ounce of choreographic writing hitherto absent from most of the projects presented at the beginning of this festival.

Give me something! I even say yes to a poor version of Pina's Rite of Spring, in the peat here.

A spectator/complice starts to sing, and the lyrics help me to understand that I am still in a bad dream that repeats itself, again and again.

“Death is nothing but the end of the beginning.”

I have been witnessing a slow death of concentration for almost 45 minutes. Without knowing the original intention and questioning, I deplore a simulacrum of falsely innovative intentions. How then to go beyond the simple confrontation between men and women? Probably not by knitting... a historically feminine task that proves that despite the will to change our mentalities, we are still prisoners of an extremely gendered form of education, imagination, lifestyle and thought.

This is the end, I hastily rush towards the exit, like Alice in Wonderland, of what seemed to be an ode to dreams, but which all along only made me live a waking torment.

Afterwards, I couldn’t find the link between these two proposals, I couldn’t distinguish the visceral aspect that committed them to these artistic and dramaturgical choices, I couldn’t advise you to live this experience. My horoscope was right, I should have gone home to rest.

Advice for all: always follow the indications of your horoscope!