The anecdote unfolds something like this: At the premiere of his Bolero, Ravel was surprised and somewhat annoyed by the enthusiastic acclamations his piece had received, crediting its success to the obsessive quality and sexual undertones of the work. Later that evening, his brother Eduoard mentioned hearing an old lady shouting “Au fou! Au fou!” above the loud cheers. Ravel responded sardonically: “That old lady got the message!” Attempting to refashion Bertolt Brecht’s Seven Deadly Sins for her theatre company Casa Conveniente, the Portuguese choreographer and artistic director Mónica Calle reached a dead end. Locking herself in she “rewrote everything and ended up listening to orchestra rehearsals”. This is how the sharp voice of Leonard Bernstein became the unlikely narrator and Maurice Ravel’s Bolero the musical leitmotif of a very different dance piece, Ensaio para uma cartografia (Rehearsal for a cartography), performed during the Oktoberdans festival in Bergen.

As the title explains, the piece is envisioned as a rehearsal. Calle creates the show while performing it, first in different parts of Lisbon, and later in Europe. The bodies are mapping both their own journey of discovery and the journey of the piece. Through the two-hour long performance Mónica Calle and twelve female amateur dancers of all ages stand naked on stage. Starting out tentatively, the ensemble follows Bernstein’s guidance, rehearsing, repeating and finally completing the Bolero several times over. The recurring themes of the struggle for perfection and the pain and suffering inherent in the artistic practice are movingly depicted in the performance. However, there is a final element that Calle wants to emphasise. In her own words, the mission was to embody women’s resistance allegorically by creating a “simple and precise movement language to show the power of [female] liberation”. It is here, as a supposed representation of feminist struggle and empowerment, that the piece becomes problematic.

Before digging into the details, some contextual information is worth mentioning. While not the only composition in the performance, Ravel’s Bolero is evidently the beating heart of the piece. It is repeated from the beginning, and it returns for the final climax. Commissioned for the ballerina Ida Rubinstein in 1928 Bolero was intrinsically connected to the dance form from its very conception. Inspired by the homonymous Spanish dance, Rubinstein’s Bolero choreographed by Bronislava Nijinska depicted a female gypsy dancer on a round table surrounded by men. The clear sexual and seductive undertones of the piece was perfectly embodied in Ravel’s creation. Lasting only fifteen minutes, its catchy, geometrical crescendo is a culmination of sensual thrills. As few other classical pieces, Bolero became associated with sex. In the second half of the twentieth century, it was reused and adapted, building around itself an aura of both decadence and bohemia. 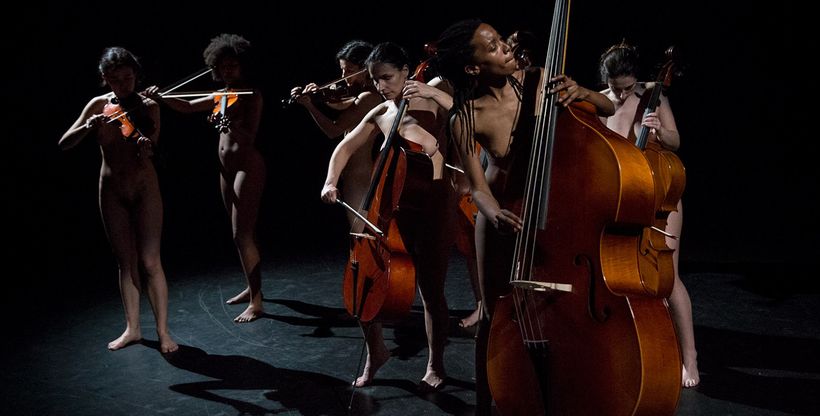 A naïve rehearsal becomes victim of the male gaze

In her adaptation, Mónica Calle ultimately fails to critically challenge the misogynism in the heart of Ravel’s Bolero, thus finally satisfying the male fantasies that conceived it. She fashions the fifteen-minute musical score into two-hours of repetitive bodily vivisection. The choreographic piece has a well-balanced structure that shifts between the two main media: the body and the instrument. There are thirteen women on the stage, all different ages, different shapes, standing nude in front of the audience.

Whenever there is nudity on stage, one inevitably starts to notice the body in all its detailed features. This is completely fine. However, there must be some point to it. The artist argues the idea of the body as a “gift, the body that presents itself to the gaze of others”. This conception of the female nudes as purely objectified bodies, as gifts presented to the audience, is clearly quite extreme. And this is where I get lost. The nude females are just that: sensual nude women dancing seductively to a rhythmical tune made to simulate sex. There is no challenge presented to the audience. What is left is a radical objectification without any critique integrated in it.

I wonder what kind of ‘feminism’ we participated in. Was the initial idea to problematize this nudity? Or to demonstrate pride and defiance against the male gaze? If so, why was Mónica Calle the only one dancing proudly and powerfully, with the other dancers being either timid, expressionless, or smiling seductively? Might it be because she was the only professional performer? It seems that the seductive music led the piece to forget its initial idea and innovation, instead opening itself to pure male-induced fantasies and objectifications.      Following the enthusiasm of certain (male) members of the audience, for some the two hours turned into something of a waking dream, captured in an endless loop of continuation. For me, it was closer to a nightmare. 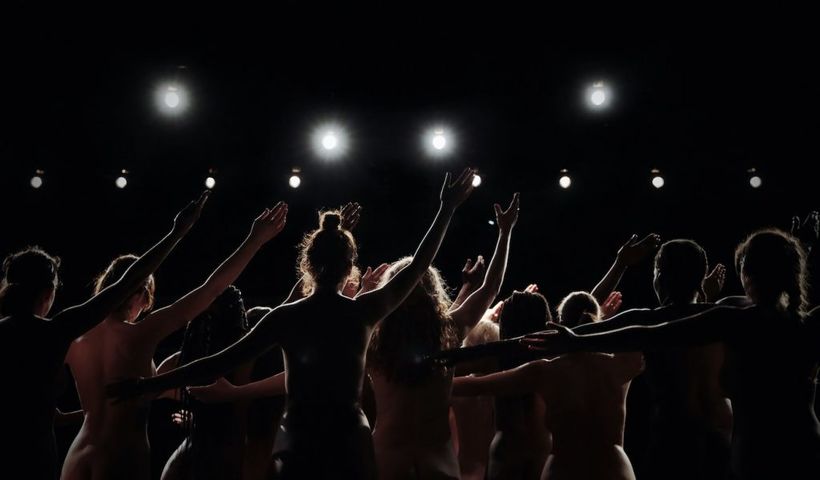 At a certain point I felt a sudden pang of rage. Initially I had been carried away with the excitement of a new idea taking shape. Up until the middle part, where the music breaks down and the strain on the actors becomes palpable, the composition seemed reasonable and intriguing. But after a while all the repetitive soft movements to soft classical music in the soft yellow light became a provocation. The final hour of the show had become a soothing, repetitive soft porn. There was nothing new happening, the same repetitive two-steps as before: thirteen nude women bending their legs, touching each other’s limbs, slowly raising their arms, exposing their bodies to the audience. Women on display. What was really the difference between this and a burlesque or a strip tease? With all due respect to the craftmanship of the burlesque and the strip-tease – I don’t normally attend a performance to be aroused.

Notwithstanding my own hesitations, there was definitely an ardour in the public at the end of the show. Bolero’s orgasmic rhythms, lilts and bounces lit a ferocious fire in some of the (male) spectators. A man in the third row was intensely shaking and howling like a wolf out of pure enjoyment. I do appreciate the exploration of new feminist practices, even while ambiguous or problematic. However, this piece succeeded only to leave me hollow and frustrated. I thought about the old lady shouting “Au fou! Au fou!”. Whether foolish or rubbish, Ensaio para uma cartografia works on subconscious level not for but against the women.

Written from the performance on 23 October 2022 at Studio USF, Bergen, Norway.