Going with the flow

A stream of words and thoughts about the KoresponDance festival happening in Žďár nad Sázavou in July 2022. now and I start

how many  of my sentences

many words I chose

the exact thought I

wanted. And it feels

performance. As if art,

are together creating this fictional

qualities that can be looked at

as a separate performance. 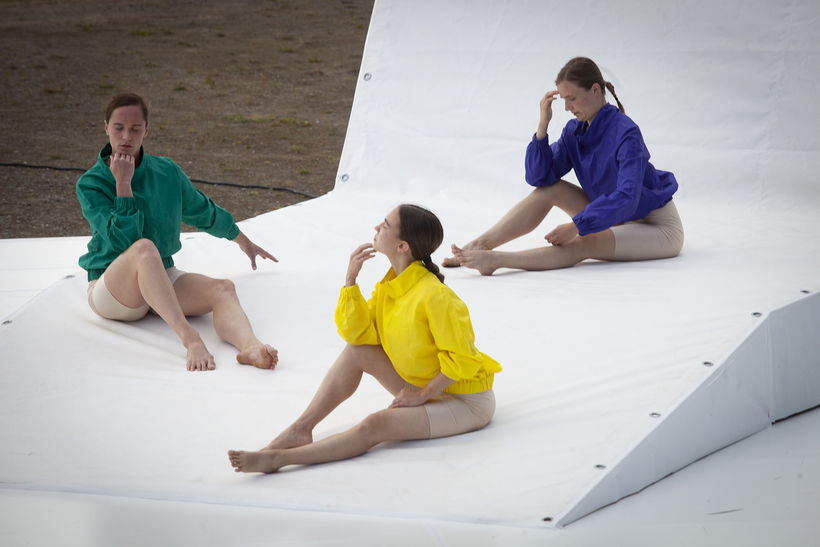 While I was still at Žďár I chose to look at the festival from the perspective of this years’ theme ‘Factory in Motion and Water’ or as I thought while being there—‘factory and water’. I wanted to pay more attention to the curatorial aspects of a festival that’s full of site-specific productions and exploring the metaphor. And the reason for my interest is simple—in providing a theme, curators give us a guided path. Choosing to have a theme in my opinion is like giving a hiker a map with marked routes on it. It becomes a gentle way of leading. Now I suddenly see this clever sentence on the festival webpage that says: “Two dramaturgical axes are related to site-specific poetics: Factory in Motion and Water”. I’m jealous. From my perspective, this sentence is impeccable. The two aspects that the festival is exploring are shaped into ‘axes’ meaning that they are just spatial directions and a lot can come with them. Also they are called poetics (the choice of word couldn’t be more precise considering the natural and historical narratives that flow through this castle and its surroundings, and the freedom it offers the different art forms and practices that this festival has gathered together). That’s the first part. The second part of the sentence also has some possible interpretations. For me it’s these two: ‘factory in motion and IN water’ and ‘factory in motion; water’. No matter which of these I choose, one thing is clear for me—the factory part of this festival I feel is too direct, too literal, and too non-poetic. Well, ‘that’s the nature of a factory’, you might say. Rigid and in complete opposition to nature. By putting factory at the beginning, I get the feeling that the festival’s creators are suggesting that it will probably play the main role. At the same time, I can imagine that factory is a significant part of the locals’ everyday life so much so that it becomes a part of the community. And here in Žďár and at the KoresponDance festival, community is a really big deal - if not the biggest. However, my body and mind put the greatest emphasis on water. Let’s consider the location of Žďár nad Sázavou (meaning: the city of Žďár on the Sázava river) itself. It is no accident that the name of the river is in the name of the city. Water is an undeniable part of the city and therefore of the castle and the festival, too.

KoresponDance is a festival that takes place at the Žďár castle, it is a beautiful castle complex filled with relicts from aristocracy and bursting with nature. Nothing here feels pompous. This is a place that unites art, local people, history and today, nature and rich architecture with such ease. For me, the performance programme starts with the completely unpressured beginning of Cirque Inextremiste’s performance ‘Damoclès’ performed by Delphine Dupin, staged in the castle’s apple garden. The transition from me simply existing in this snug place to me being an active member of the audience is so intangible that I start to feel like I’m on a boat on the river being taken through the landscape, and I have the opportunity to stop for a bit, watch the performance, and then continue on with this uncommon peace. There is no rush, no ticket checks, no numbered seats, we all flow from performance to another as one body in motion. ‘Damoclès’ is quite active and provokes a strong reaction because of Delphine’s humour and she invites members of the audience to participate in creating an architectural structure from real (and heavy) wooden boards. Although this performance may be considered to be a really strong start, I resist the power of an increasingly excited audience, laughing and cheering and I remain calm. I therefore create for myself a gradual and gentle introduction to the place and people. Observing, acquainting myself, slowly starting a stream of thoughts and experiences. As if from nowhere a brook breaks out to the surface of earth and the stream starts. 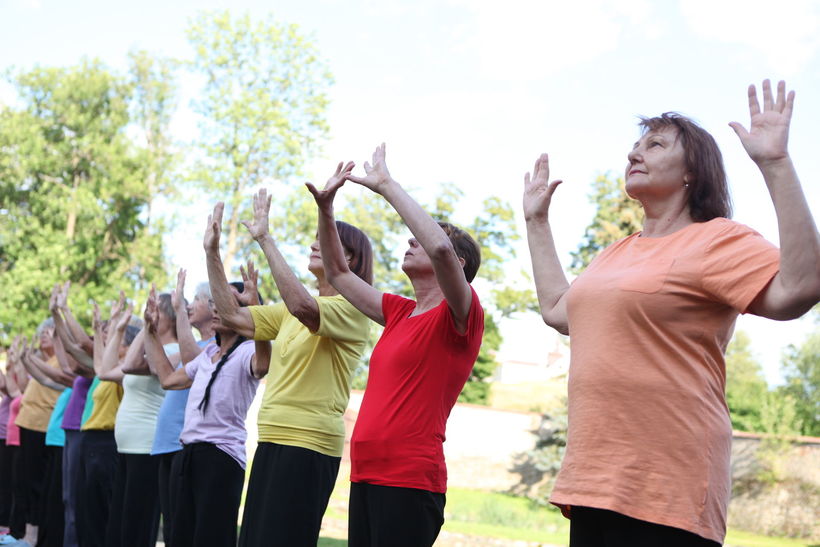 With this fluid feeling I’m floating through the days and can feel the flow of the festival. The natural dramaturgy of people moving from performance to performance and the unpressured beginnings of pieces here really is like a quick yet influential bubbling of a brook. It starts with this quiet, curious introduction, then becomes stronger with every performance, connecting the audience, creating a unity, a community, then swallowing the audience, and in doing so becoming even more powerful, culminating on Saturday evening before gradually dying out on Sunday. The audience is left wet yet satisfied and filled with kindness, open-mindedness, and passion. The stream nurtures everyone and everything it passes through. Its natural power makes the factory look like a static institution, unable to change and feel. When put in a specific context, one can highlight what the other lacks.

If you break it down to the finest atomic structures, factories and water aren’t so different from each other. In this situation, I want to stick with the disparity of these two aspects. Probably the clearest difference between factories and water as a way of approaching the creation of a performance and story-telling can be seen when comparing the performances ‘I am here’ by Galit Liss and ‘Metasystems’ by James Batchelor & Collaborators. Both of these productions are performed by local women in collaboration with artists. ‘I am here’ brought together mature women from Vysočina, Israeli choreographer Galit Liss, and ladies from Israel who perform in most of Liss’s works. ‘Metasystems’ was created in collaboration with the Tokoz lock factory and Žďár locals. This kind of collaboration showcases the community development aspect and the idea of creating a joint experience. A location can say a lot about a performance: ‘Metasystems’ is (or are) located in the Tokoz factory and the performers are actually factory workers while ‘I am here’ takes place in the castle grounds nar small fish ponds and is performed by diverse and bright women. And the nature of the performances directly correspond with the nature of the location—‘Metasystems’ create a rigid, rhythmical, structural world with repetitive and monotonous movements that include creating, disrupting and changing the patterns of bricks. I dive into the repetition and rhythm, finding an opportunity to explore patterns of movement, while ‘I am here’ shows the fluidity of sharing space and time with our bodies, with our different ages, making the audience a part of this whole moving body that becomes the performance. It feels as it the main role in Batcherlor’s performance is played by the rhythm and structures, while Galit Liss’s piece places the emphasis on the performers and their means of expression. Each and every one of the women moves in a way that is most natural for them. Also, when they spread through the audience and initiate one-on-one contact it feels inviting, not violent (how the interaction between performers and audience members can often feel). The gentle stream of kindness, wisdom, fragility and humbleness embraces me as a member of the audience and sways me into feeling that I’m being taken care of. While the factory performance tickles my intellectual side, ‘I am here’ manages to inundate me with both emotional and intellectual stimuli. For me, that seems to be more successful. 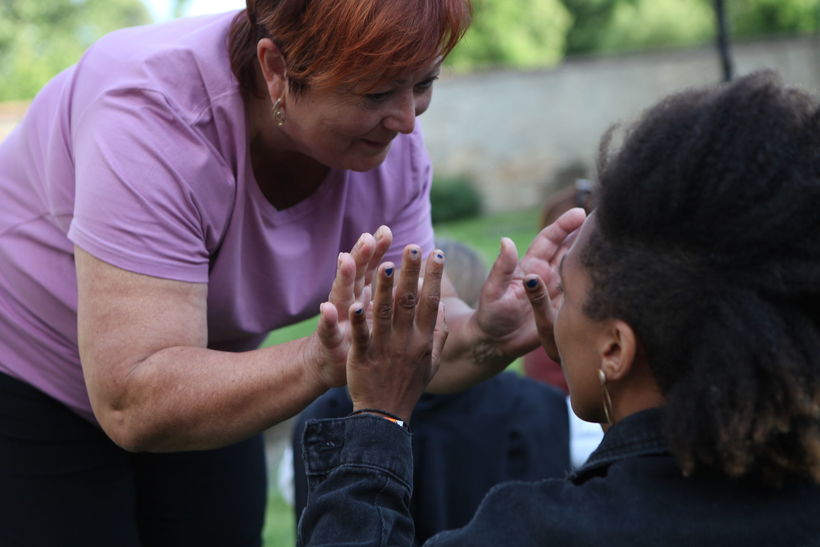 The continuous stream took me from prelude to culmination and my unintentional flow through the festival programme created the most nurturing, calming, and valuable third part of the composition. On Sunday I saw what were for me the most powerful performances—the aforementioned ‘I am here’ as well as ‘Treatment of Remembering’ by POCKETART. Although the stream becomes weaker, I am able to feel the influence it had on me. Sabina Bočková and Johana Pocková have approached the concept of the natural world coming to an end in a way that is new for me. And I always feel excited when that happens. The contrast between clean, white, almost sterile scenography and the location of an event that is full of nature and different creatures excites me. Furthermore, the synchronicity of the dancers’ movements is astonishing. Although the movement tends towards unnatural ways of expression, it instantly connects to my gut and brain, too. I feel nourished, nurtured, and fulfilled with creative imagination. My neurons are creating electric signals and my brain lights up in unexpected patterns. I’m like a hydroelectric power plant. The water has created electricity in me. And now I have the power to go even further.

Water includes the unknown. The possibility of stopping a performance because of excessive humidity. The possibility of not knowing when you’re going to need rain boots, a waterproof blanket, or maybe an extra sweater. And the thing is—water is eternal. It’s always been here and always will be. It is a part of the human body, it is a part of our community, it connects and separates. Just like the sun it is a force that can both create and destroy. For me, water becomes even more dominant and takes on more meaning in this festival. The metaphor crystallises.

Editorial note: This text is written as part of an international writing workshop entitled Writing About Dance (On Body And Mobility). The workshop was a collaboration between Taneční aktuality and Performing Criticism Globally, kindly supported by EEA Grants, and the resulting texts were written in response to productions at this festival.