To reach the seated place I cross the stage: during this short walk I notice the various props hanging around immersed into a smoking atmosphere: video installations, a screen, a white plastic hanging, some pillows, drapes, a basket with some fruits, some ice melting on the floor, fans turning. The performance starts with Le Gac narrating in French (with English subtitles) a fictional story located during a retreat in a Croatian spa. This resort is here represented by a round white tent, and some pillows scattered around the stage. Le Gac is dressed in a bathrobe, a large furry waistcoat and is wearing flip-flops. The main objective of this spa is the pursuit of happiness through various types of treatment. In addition, each participant/client has assigned a nickname, her own is DOG (23). The process of self-discovery is guided by LIQUID VIRGIN – whose face appears on the screen – defined in the programme notes as “the spectral figure of the Happiness Movement” that manifests itself through a “breath called YOLO, a kind of primordial atmosphere”. The, a video on an interspecies creation program is projected on the side white screen. Retina, dressed in a white tunic and barefoot, curates the recorded and live soundscape, which remind me of elves and the upside down of Stranger Things series: a mix of naturalistic sounds embedded with some ambient atmosphere.

I am a bit suspicious when I enter a dance stage and find it full of scenic and symbolic elements, videos, drapes, hanging things. Most of the time it means that I will probably not see any dance, intended as movement and body placed or displaced in space. My sense of irritation increases when I must follow subtitles, which flow faster than my attention and at the same time, I try to watch a video that looks like a promotional about lifestyles. I must admit that my initial experience with this piece did not get off to the best start.

At the same time, alongside my feeling of unease, somehow, I get attracted by Le Gac's welcoming voice, which reminds me how much verbal language per se is distracting and decorporealizing. Even though I appreciate her indications for “free-radical stress antioxidant”, I am wondering which kind of political underlayer there must be in this piece. At one point Retina starts burning incense which contributes to create a gentle and delicate atmosphere. Towards half of the performance Le Gac invites us, the audience, to make ourselves comfortable on stage, offering us a oat milk drink with ginger and other spices. Then Le Gac and Retina create live sounds with microphones covered in coloured jellyfish-like plastics. 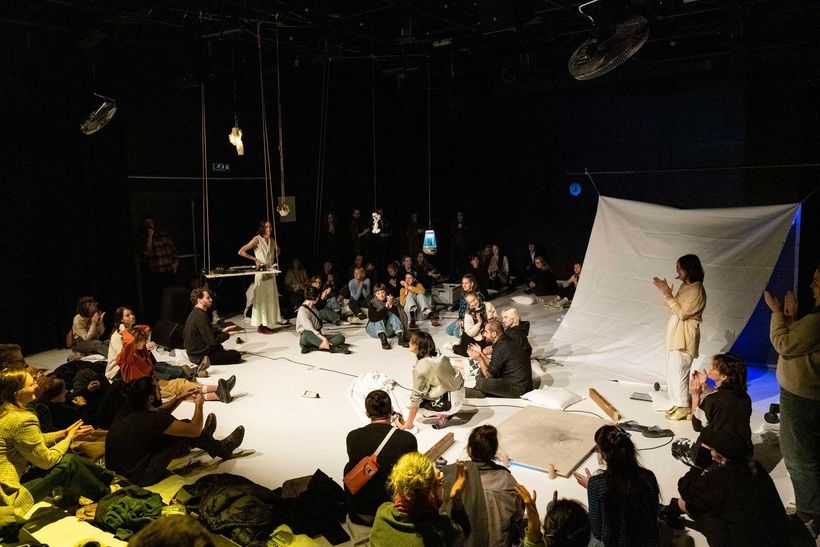 A Kind of Magic

And then the magic happened: the turning point for me in appreciating this work happens when with the simple gesture of lifting and lowering a sheet for a couple of time and playing it on a microphone underneath, the atmosphere intensifies. I get the feeling that the vibe of the room changed. Finally, I see Le Gac's body dancing flamenco in resonance with Retina playing electronic drums     . The intervention of the percussions gives a rhythmical path, like a waking up after a long dream, or nightmare, I guess it depends on the individual perception. How intense is her dancing body? A sense of joy pervaded me, and I left the performance with a sense of lightness and hope.

At the very end Le Gac thanks Sven Åge Birkenland, the former artistic director of Oktoberdans International Dance Festival, recently passed away, for inviting her to present her work in this circumstance. These feelings of joy and gratefulness pervade me. A similar feeling of love returned to me the following Saturday, at the celebration for Birkenland’s life, characterised by a strong sense of community, belonging and friendship.

A Need for Definitions?

I believe that La Caresse du Coma ft. Yolo has succeeded in its performative intention to create new imaginary worlds. Even though it was defined as a dance in the programme – actually its timing could be seen as choreographic – and the work can perhaps free itself from a need to define its performative genre, nevertheless a persisting issue burns into my mind: to what extent I should accept to call this piece a dance. I think that definitions and the use of specific terminology of what we as audience see and experience are important because words could open up or closing down our involvement into the piece, especially today where the ongoing gender battle is based on a careful, at times almost intimidating, use of language.

Although I understand and appreciate the festival's curational choices to show interdisciplinary and mixed media works, I am questioning if maybe calling this work a performance or performative installation would have been more precise. Would it change the perspective and expectation towards the work itself? Would it be more respectful for the artists and for the public? Or perhaps we should invent other names to call the current dance and performance presentness. We are in 2022, and I consider that speaking about the forms, new forms, their intersection and being more explicit in the programme notes would be beneficial for the artwork in general, to not create false expectations, and to open the public's perception and possibility of imagery.

Written from the performance of the 22 October 2022 at Studio USF as part of Oktoberdans International Dance Festival (Bergen).