Monument 0.10: The Living Monument – Furiously Slow Journey into the Darkness of Colour From the beginning of the piece, a half-light atmosphere wraps the scene, as if to announce the drainage of colours that will appear in the later scenes. Surrounded by fabrics, figures dressed in glamorous, glitter black, with their faces hidden, tilt their bodies, crumple, and crawl in an extremely dilated tempo which has drawn me into the piece.

Thereupon, different coloured monochrome landscapes follow one another, from blue, to pink, and light blue, red, golden yellow, until black again, ending in an impure white. Recycled life jackets, baskets, plastic bottles, pipes, lace blankets, inflatables, highly visibility jackets, plastic tubes, helmets resembling plastic brain etc. create the costumes and are the primary elements of this ecological baroque landscape, at once armour and prosthesis. In this accumulative scenery, body parts and movement details emerge, as for instance hands covered with lace touching the fabric. The performers move solitary with some exceptions where two bodies encounter each other, forming an intense embrace. They might look lonely, but even though they move individually, they act as a united, giant organism, breathing together. The slow pace of the movements always looks to have a precise, clear direction and function, as each movement is performed to reach a specific goal. It appears to me that the dancers are perpetually moving like inscribing with their bodies the space and the time passing. Furthermore, this ongoing slow dance is the first motor that makes the changing of colour possible: through the slow and compact dynamic, the bodies cross the stage, tilt towards each other, enter, leave, and return on the stage. The costumes, made by different materials as previously noticed, were often interlaced with the movement scores, which intensified the movement quality. In specific moments the slow and continuous movement of these anthropogenic figures generate a humorously collapsing scenery, like when a furry totem and vertical beach mat tilt over, as inclined towers (and my mind went to the well-known Pisa tower).

The soundscape recalled pieces of creaking ice, or distant bells. A folk song sung live by the company delineates a catwalk in red, highlighting qualities such as terrestrial blood, earth, fights between bodies. Toward the end, the set and the performers drastically turn into white, marked by different shades and lace, and all the performers get together on a giant lace carpet.

The choreographer succeeds in creating dimensions within the monochrome tableaux, where my gaze cannot fully focus. As a result of the light design, I find that the colours presented are never shining but as they are always bringing within them a dark side. It is thanks to the relentless, furiously slow dynamics, I am able to embrace this darkness of colours. The feeling I got experiencing these sets is that the overall stage image is compressed like in a 3d painting, where I am feeling sucked in. The corporeal generosity of the performers in their wrapped and distorted costumes, allowed me to unfold and to keep my attention within the piece for all the duration of the performance.

The programme informs us that the show is part of the 8-year long project by Salamon until now with different companies) on monuments and how they can preserve collective memories, for the present and for the future. Whereas “monuments are made of hard matter to last until the end of times”, Monument 0.10: The Living Monument “is built on still life, slowness and the presence of the body.” In my opinion, the reference to still life can be read for example in the way the various tableaux are composed, capturing matter that will eventually decay, in the way bodies and clothes are laid out. Curiously, whereas usually “still life” defines works of art whose subjects are inanimate natural elements or human-made objects, Salamon decides that the components of this still life can move. The speed in which she makes them move almost goes against time, against the time of current everyday life, against the time of haste. Embracing a temporality that almost wants to stop, but pursue an ongoing transformation, remaining imprinted in the eye of the beholder.

This specific work is based on the principle of recycling and the materials used are from second-hand shops or donated by theatres. Apparently, Salamon’s collaboration with Carte Blanche within the frame of the project will continue in the next years.

However, while watching the piece two thoughts arose in me.

Firstly, the role of the technicians. Dressed and hooded in all black, they act as stage assistants. Their presence which is functional to the dramaturgy of the piece – they move the sheets, changing the scenes – has a rhythm that I found jarring with that of the performance, like creating a contrast within the vision. Even though this was sometimes humoristic – I guess unintentionally –  it reminded me that the performance action is drastically embedded in the time of the production, creating a perceptive gap between the immersive atmosphere of the piece and the going back to reality (represented here by the stage assistants’ movements). To what extent is the ecology of time of the audience’s sight acknowledged by the choreographer? Drapes, cloths, stage elements are sometimes performing a mechanical dance with a different temporal and rhythmic quality from the choreography.

Secondly, I observed this performance from a frontal perspective, and I wondered: how can I as a member of the audience best experience this immersive scenic opportunity? Somehow my body in this 120 minutes-long piece wants to move, I would like to lay down, take my eyes off the scene for a moment and then dive back in again. Despite the fact that the piece is created for the stage, and obviously needs all the scenic apparatus, however, is also demanding and requesting a lot of attention from the viewer. I am reflecting on how the regular frontal view is affecting the overall work, and on how it would be if this could be staged in a context where the viewer could experience it in a more physical and experiential way. Pushing the boundaries of the audience’s perspective and requesting an openness of the perception could also need a reframing of the audience position.

Nevertheless, this impressive slow work reminded me how abrasive a dance piece could be: encompassing an obsession for several layers in monochrome pictures and dancer’s corporeality loaded by costumes, the choreography is able to capture the sense of time and its transformation.

Written from the performance of the 20 October 2022 in Studio Bergen as part of Oktoberdans International Dance Festival in Bergen. 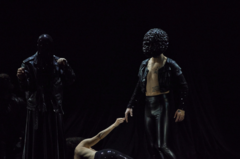 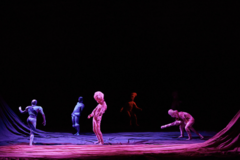 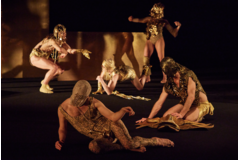