Many people, a barefooted woman and a man inviting me inside the building. I have my shoes on. How did it happen – I am a spectator. I am in a small room, here are two red couches. Door locked. I am dancing for the first time.

I was here yesterday in the evening. But I don’t recognize the place. Are all the monsters hidden? I am following. I don’t see anything but the dancers and the red couches from the room I once shared with my sister.

Could they both fit into that room? If only I knew what I was dancing that night. If only the younger me had known we all can dance barefooted at the railway stations.

And in the parks.

And at the beach.

And on my red couch.

And even on my sister’s red couch.

The dancers split. She went upstairs on an escalator, he went in a staircase. I followed her watching her feet becoming dirty with each step. I have my shoes on.

I am in the small room, here are two red couches. Door locked. I am dancing for the first time.

I am lying on the floor, the music is loud. I am breathing fast.

The dancers are moving slowly, gently. The lightness their presence creates reflects a strong connection between mind and body. We see insides become outsides. The dancers are clear. They are every-body and no-body at the same time.

I was nobody once. There – between two red couches. I only danced once…

The air between them is also clear. The monsters have no rights to appear by day. They have no rights to ruin my day dream. My dream. Their bodies are woven with the sounds, their identities disappeared. They are – dance.

I was dance that only night. Later I have met some people who had become dance too but I lost them. I lost me somewhere between the small room and a railway station in the East of Czech Republic.

Did I really find dance again here at the railway station?

Did I really find dance again here at the railway station?

EDITORIAL NOTE:
This text was written as part of an international writing workshop entitled Alternative Formats, aimed at developing alternative ways of writing about dance. The workshop was a collaboration between Taneční aktuality and Performing Criticism Globally and took place during Move Fest Ostrava 2021, kindly supported by EEA Grants, and the resulting texts were written in response to productions at this festival. Marija Saveiko’s text small room responds to Andrej Štepita and Miriam Budzáková’s performance Passing / Station. 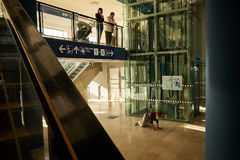 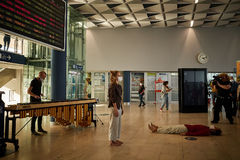