Art is a reflection of the world we are living in, and an artist cannot create uninfluenced by their surroundings. This time Crystal Pite and Netherlands Dance Theatre bring a political theme to the table – both literally and metaphorically.

The Statement is a piece that plastically – but also thoughtfully – presents an image of reality, through gesture-based choreographic choices that shape the action into a scene with which the audience can easily identify. It is simple and clear, with outstanding choices of vocabulary. The movement is often sensitive and soft, but at the same time precise, and highly focused on details.

The dancers follow a spoken narrative written by Pite's collaborator Jonathon Young. Text and dance intertwine almost imperceptibly, making you wonder if the movement follows the narrative, or vice versa. The narrative itself is turned into a physical explanation, and this ‘on the record, off the record’ backroom meeting play elegantly touches on gestures of guilt, fear, worry, anger, as well as hierarchy.

A minimal setting and four dancers in suits work perfectly together, bringing Pite's idea to life and provoking underlying questions about people’s conflicting moralities to surface. She speaks loudly, yet the voice is somehow distant. It makes one ask onerself: What is the power of art in reflecting truth? 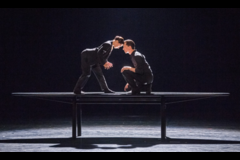 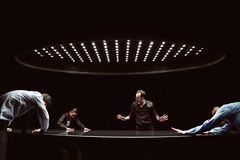