13. 4. 2014 Personalities
Autor: Viktor Čech
Thoughts on the laws of physics in dance inspired by production Correction by VerTeDance. 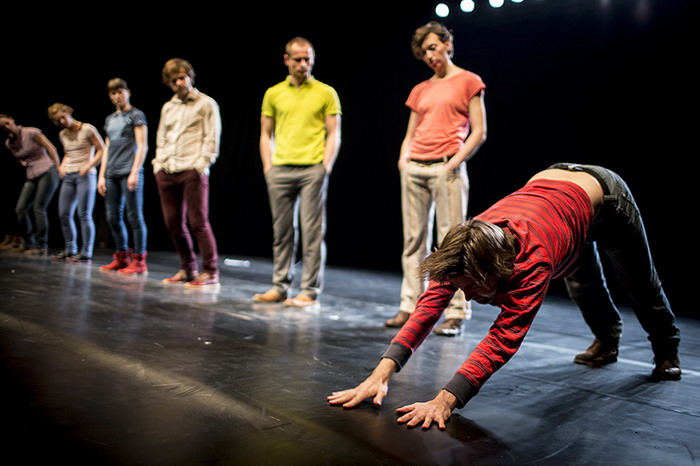 In 1970 Trisha Brown, a distinctive personality of American postmodern dance, presented a series of choreographies Leaning Duets, taking place mostly on the street. In these, pairs of dancers coped with the effect of gravitational pull on their tilted bodies. Performers supporting each other, each tilted sideways in the opposite direction at an acute angle, tried to walk forward using the mutually supporting sides of their feet. Unlike the later purely professional remakes of the production, performed recently (e.g. Early Works from 2010 staged by Trisha Brown Dance Company), the result was not an elegant and masterfully executed movement of trained dancers, but often very clumsy efforts ending up in falls in which, according to the surviving archival footage the audiences were involved, too. In the subsequent stage production the author came up with other variants, using rope aids – for example, when a pair of performers tied up either facing each other or one after another and started their play of all possible balance-motion variations from these positions. Unlike some other more sophisticated author’s works from the point of view of technology and acrobatics that were based on the imitation of normal walk in the position shifted by ninety degrees to the wall, this was a borderline situation with fully functional movement, although pushed to the very limit of practicability. The moment of mutual reliance, the need for trust and cooperation between the two performers brought to this ceaseless balancing on the verge of falling a shared moment too. It is not just about one’s body struggling to defy the laws of physics, but also about the power of human reciprocity trying to overcome them.

The question of reciprocity is also linked to a variation on the above-mentioned work of Trisha Brown, which was staged by Aleš Čermák and choreographer Petra Hauerová in 2013 as a part of Čermák’s awkwardly titled project To start off, we can re-formulate a demanding system of conditions for a positive response like: " Yes! Real life is now." In the parable of the indivisibility and reciprocity of social ties, three dancers were struggling with gravity for about a quarter of an hour... Joint overcoming of the gravitational pressure at an angle to the ground with back leaning bodies was in this case not only a parable, but even a metonymy of reciprocity necessary for the preservation of the human collective.

In the recent project Correction, staged by the dance company VerTeDance and directed by Jiří Havelka we can see much of what I have already mentioned above. The project builds on a site-specific event by VerTeDance in the abandoned premises of spa of the former Elektrické podniky functionalist palace. The expressive and existential drive of this experiment, in which the issue of oppression materialized in physical manifestations of psychological barriers was somewhat inaptly depicted in a way too specific and descriptive context of the communist concentration camp. The attempt to transform it to the theatre under the direction of Jiří Havelka turned out to be unexpectedly different. As other reviewers pointed out, a brand new production has emerged. Correction is based on an alienation from any specific historical timeframe, deprived of efforts for depressing emotional expression and built on a simple, yet powerful formal element, which itself helps to define clearly the theme of bondage very well. 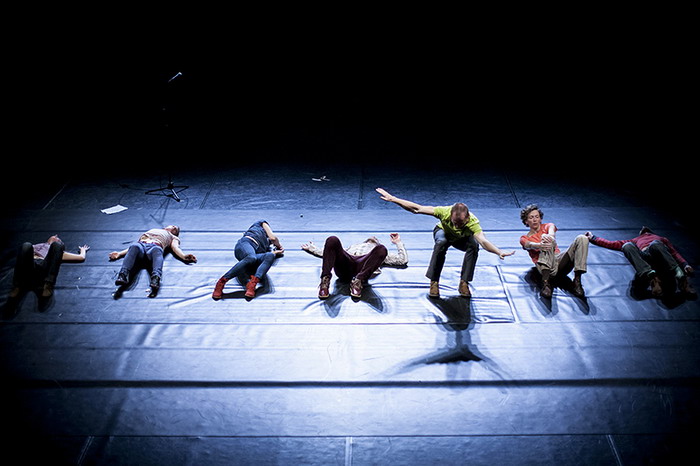 This formal element is the capability of the human body to tilt at an unnatural angle. Seven dancers standing next to each other, facing the audience start to play around the fact that they cannot move from the spot. At the beginning we can see indications when performers use their eyes and slight pokes to start off a process not dissimilar to the interacting balls of Newton’s cradle. However, the work with momentum and kinetic energy is gently absorbed by the experienced dancers and rather aesthetically represented by the controlled motion. Following phases of the production gradually reveal the at first not-so-obvious "artificiality" of dancers‘ stability. Slight swings change to steep tilts and sudden falls, in which the fixation and immobility of the shoes become apparent and the restrictive aspect becomes dominant. What initially looks like a stable and unshakable posture, seen as steadiness in life by the authors as well, gradually reveals itself as an impediment. 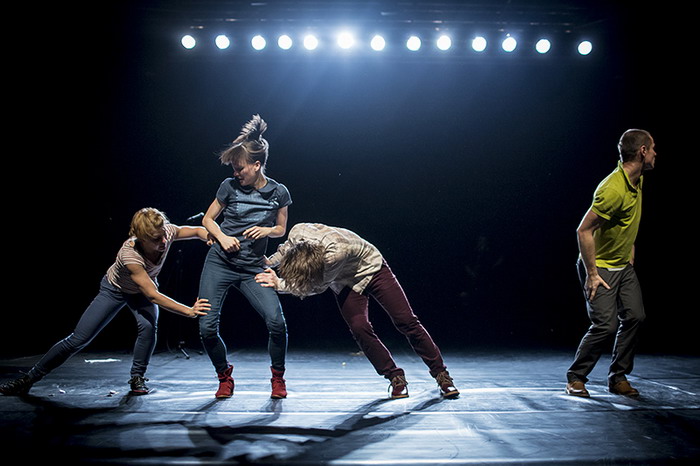 Jiří Havelka brings to this process a changing dramaturgical line, which in the sequence of scenes step by step creates situational moments ending with a disco scene where the dancers in the stroboscopic light still work with their fixation to the floor.

However, the well-coordinated falls of dancers on the stage and a number of other often comical sketches in Correction do not resemble clumsy experiments and falls in the original staging by Trisha Brown. In this case, visual chemistry among the performers is more important than the real essence of movement and fall, to which the dancers yield, accompanied by live music by Clarinet Factory.

Review of the performance on April 6th, 2014, Ponec theatre.