This year‘s Bazaar Festival thematically followed the previous edition and focused on migration and resistance to threats in the environmental crisis. The eighth edition of the festival returned to the spring dates after two years. Artists from Central and East Europe presented their shows at various places in Prague on 24-27 March. Voices of the extinct

Romanian choreographer based in Berlin Sergiu Matis opened the eighth Bazaar Festival at the Ponec Theatre. His show Extinction Room (Hopeless.) was staged on Thursday and Friday night.

When entering the auditorium, viewers became part of the show without some of them realizing it. They were sitting on benches in the middle of the room or on the floor, leaning against the wall or standing. Three figures dress in simple natural colors suddenly started to move. They were twisting, waving their hands, making birdlike sounds, changing their facial expressions, and lightly running in the space like flying birds. Their gestures were so believable that I had a feeling as if I was watching real birds.

The unclear bird squawking of the performers and the choreographer turned into a pleading song: “Come back, this is your return to nature...” Then, unexpectedly, each of them moved to one of the speakers and simultaneously started speaking in English and Czech. They listed unfavorable facts and stories about twenty-one critically endangered and extinct species of birds, such as ibis or dodo. The three main performers on the stage were joined by the others, there were eventually seven people on the stage and the audience organically moved to be able to listen to the performers. 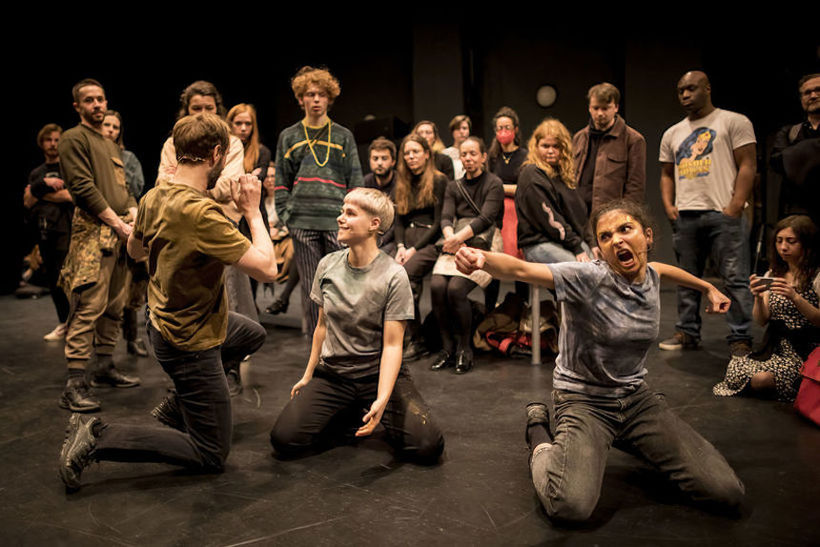 Sergiu Matis and his show managed to open a unique space for the viewers, in which they had to fight the feeling of the collective guilt as well as mourning the fate of birds. The performance was first played at Art Radionice Lazareti in Dubrovnik in 2019 with the following re-runs at many renowned European festivals. Thanks to the cooperation of three international authors and Czech artists, we could witness the unique experience of hearing the voice of dead birds from the beginning to the end of the dramatic outburst.

“Birds are very vocal and they produce unique and immensely variable sounds, much more than amphibians or insects. We have a version with more species but this one focuses on birds as they are fascinating for many people like native cultures. Birds are associated with many myths and traditions, which played an important role for me as well. The connection between cultures and the environment… Birds have a spiritual aspect, too and we were intrigued by it,” says Matis about the performance.

At the end of the show, the dancers and performers applied liquid gold to each other. We could understand the symbolism of gold differently – like the element of immortality or it could symbolize something sacred or powerful. Or was it a metaphor for nature we diverted from as we selfishly pursue material wealth instead? The ending of the performance foreshadowed the latter option the most. 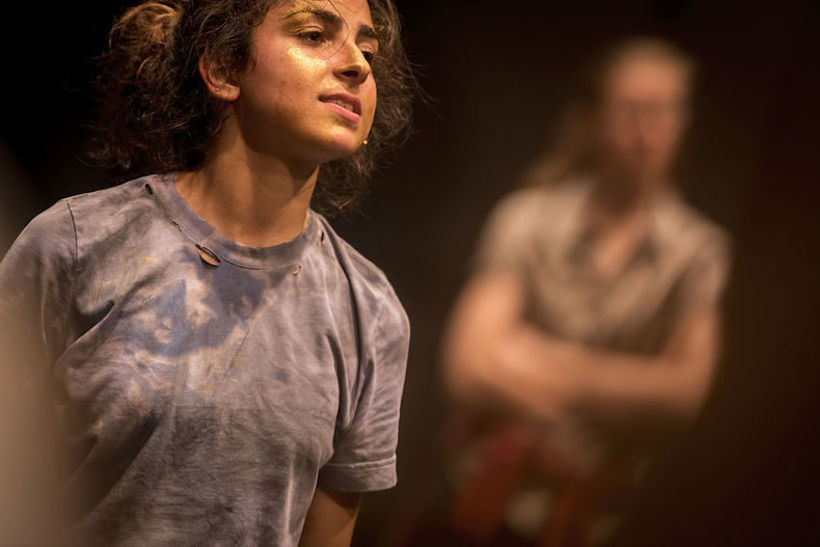 Apertures to the bottom

The program on Saturday featured the traditional Saturday Bazaar, where the audience witnessed the works-in-progress by dance and theatre artists and the performance Old Pond by Hungarian choreographer and dancer Zsuzsa  Rózsavölgyi. The audience was sitting on chairs in the circle instead of benches, so they created a spatial boundary of the production. The inadvertency at the beginning was rather funny as there were more viewers than the organizers expected the circle needed to be expanded several times. Everybody eventually found their comfortable chairs, awaiting what three dancers lying on the floor would perform. At first, they stayed on their spots doing inconspicuous movements, but they gradually developed their figures into more capacious and extensive ones, from crawling to the imitation of flying. The evolution process performed by three dancers with diverse gestures, dance, and acrobatic elements, layered on top of each other and built on each other with changes in motion details. The dancers decanted onto each other, which was supposed to express the fluidness and instability of the water environment the author used for Old Pond.

Three artists depicted the lives of tiny cnidaria (siphonophores), which live in water in the microcosmos of the pool. Choreographer Zsuzsa Rózsavölgyi used this experiment to demonstrate the constant change, migration, descending, and ascending that depends on the outer environment. The imaginative approach mediated a truly unusual experience to the audience through the dancers and space. 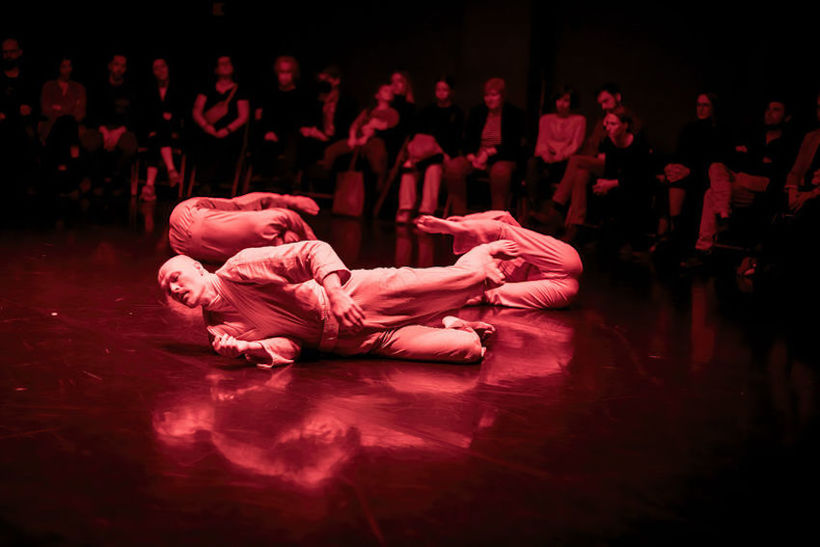 The audience could also notice the depiction of the dependence of one organism on the other and their connection with the outer environment. However, apart from excellent acrobatic performances, the most intriguing elements for me were the performers’ kimonos. Their colors changed throughout the performance, depending on the lights on the ceiling. This effect made the greatest impression because the performance was rather minimalist as a whole.

The performance was followed by the discussion with Old Pond’s author and Jana Burkiewiczová z from Burki&Com dance company based in Prague, analyzing the methods of choreography when dealing with environmental issues. The host of the Czech-English discussion was Ewan McLaren, the director of the festival. He mentioned the first performance of Old Pond at MU Theatre in Budapest in 2014 and the fact that the authors decided to renew the project and perform it without essential scenographic effects that were substituted by special LED spotlights responding to the color of the costumes.

Zsuzsa Rózsavölgyi spoke about creation and inspiration for the choreography: “You cannot separate the environment from the anatomy of the body as it always reacts to influences. I wanted to create the space of an aquarium without video screening, thus I chose a circle made of chairs. Light also changes underwater; the deeper the organism sinks, the bluer it is and its color changes, only yellow remains the same. Just as various depths in the sea change shades and colors.” She added that the original production used diodes on the clothes.

Who is to blame?

The evening performance was accompanied by The Opium Clippers, the production of Slovenian author Neja Tomšič, who told stories from the 18th and 19th centuries through tiny paintings and illustrations on tea sets. Sunday 27 March offered the final work-in-progress Under the Surface by Kateřina Szymanski and Natascha Noack which aimed to deal with coal mines.

The unifying topic of the festival – migration in the environmental context – could be perceived at several levels at the same time. One of them, and probably the most urgent, is the antithesis of activity and passivity: as viewers, we found ourselves on the screen in both performances, we became its part but only as passive observers. Given the subject matter, the interpretation gave a strong impression: we observe what is going on, yet we leave with an uncomfortable feeling that we, as part of the world, are also part of the problem. It only depends on us whether artists force us to do something after we leave the hall.

Written at the selected performances at the Bazaar festival that took place on 24 – 27 March 2022.