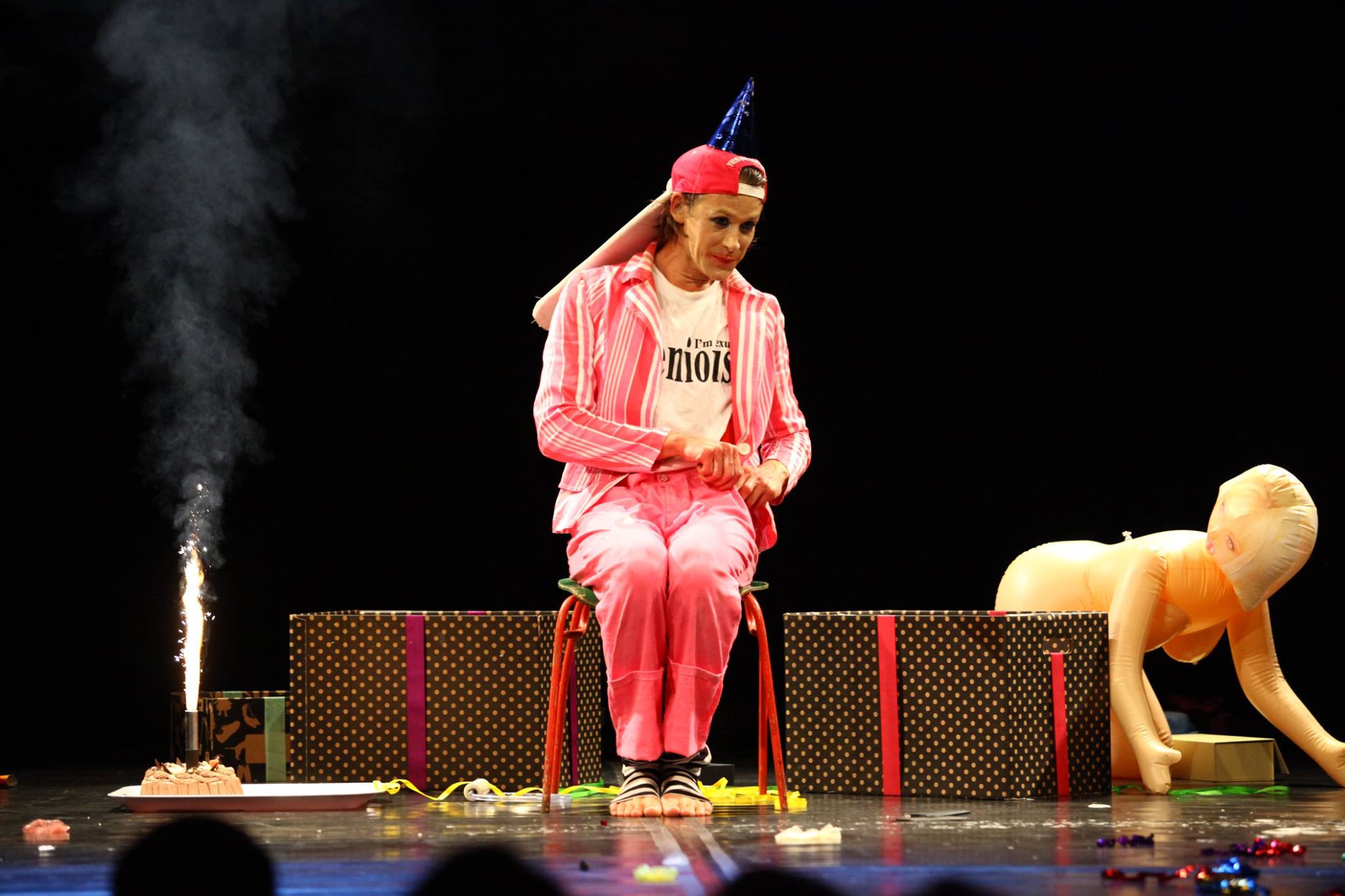 For the fourth time in a row, the town of Polička hosted the week-long festival of pantomime Mime Fest. Besides the comfort of family-like atmosphere, the festival offers mime theatre performances from all around the world. They got again a step further compared to the last edition – new know-how, new skills, chill-out, laughter and friendship. That’s how the festival can be described. The participants arrive to Polička on Sunday evening. They come not only from the Czech Republic but also from Poland, Germany, Slovenia, Belgium, Spain, Finland or even remoter places like Georgia or the USA. The first meeting usually takes place at the Theatre Club where the organisers introduce themselves and provide the essential information. Even after the get-to-know you party we all meet in the morning, full of energy and ready to take our breakfast. I should probably start dealing with more professional topics but I must mention the cooking skills of Radim Vizváry’s mother. There was the best of food from the first to the last day of the festival, the choice included vegetarian, vegan and gluten-free meals, accompanied by home-grown herbs and fruits and home-made juices. After the proper energy boost, we head to workshops. There are three of them this year - one focused on body rhythm and so called street step, invented by the workshop instructor Jan Bursa and ProjectWINGS tap dancers. The second workshop dealt with body work as an expression tool and it aimed at corporeal mime technique. Pau Bachero further developed the original form and demonstrated some new ways of its use. Wolfram von Bodecker and Alexander Neander were teaching the art of classical pantomime as they had both studied under and collaborated with the famous mime Marcel Marceau. 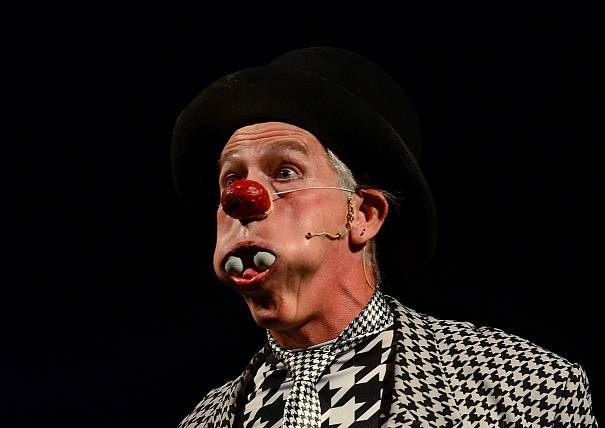 The first official festival night opened with the clown-show Týýjóó! by Radim Vizváry. The audience was so hungry for the piece that Vizváry had to perform it twice. The controversial theme of children, play, loneliness and sex provoked diverse reactions. The clown Týýjóó embodies a small child manipulating various sex toys, yet he does so in a different, childishly naive way. It produces images which are at once funny and obnoxious. The auditorium bursts into laughter. But the final scene reveals that this performance is not primarily a comedy. It shows loneliness, a human pushing himself into playing, being active, to escape the burdensome reality. It also points out the dangers of today‘s world where children have access to pornography through the internet. The story ends with a spoilt birthday party when Vizváry tumbles over and buries his face into a birthday cake. It makes you laugh hard and cry at the same time. The next two mornings belonged to the American comedian Michael Trautman and his show King Pong’s Ping Pong Rodeo. The fantastic juggler performed last year at the Prague Mime Fest at the Acropolis Palace as well. His show with ping-pong balls displays  brilliant juggling, magician and acting skills. It is not based on simple-minded entertainment as Trautman playfully touches upon (American) shooting obsession. Michael Trautman himself started his career as a mime and currently gives performances all over the world. The night at the Theatre Club offered Finland’s Heli Vätääinen and her “Finnish burlesque” Twist & Shout in which she tackles, using the ironic point of view of her clown alter-ego, the issues of a human, society and physical handicap – scoliosis. Her show was similarly distorted, gliding between the sad and funny poles and captivating many a spectator. Twist & Shout will be performed once more in November at the Acropolis Palace. 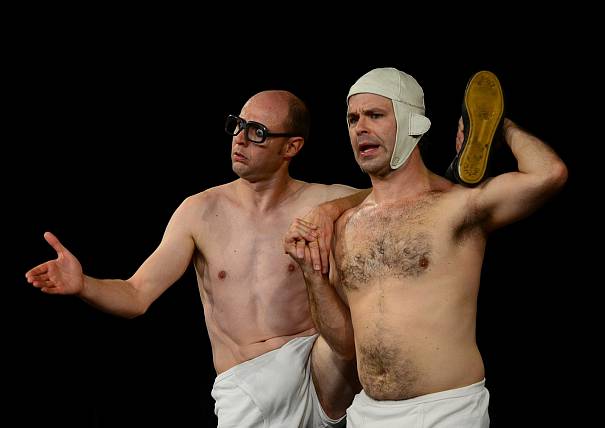 Marek Zelinka and Anton Eliáš – SYNovial, physical dance with new circus features, kicked off another festival night. SYNovial is about men, and how to become a real man or “macho”. But above all, it deals with friendship, its easy-to-come destruction and the taste of humiliation. Highly rated by both critics and audiences, the piece is to be seen regularly at several Prague venues. The second and brand-new performance was Heydrich by Alexej Byčko. It raises the philosophical question of humanity, so poignant these days. How to perceive someone like Heydrich from the political and humanistic point of view? What about manipulation of oneself and the others? That’s what Byček tries to explore - he’s not afraid of mingling with the audience and improvise with them within the tightly anchored structures (more (in Czech) about the two shows in L. Petišková’s review at: www.tanecniaktuality.cz/heydrich-synovial-z-festivaloveho-zapisniku-mime-fest-2015/.) The issues provoking deep thoughts and discussions on e.g. sexuality, society or war were suddenly abandoned on the Day 4 as the Okidok company - Benoît Devos and Xavier Bouvier, two excellent clowns from Belgium - presented its Slips inside. What they are able to execute is really incredible and hard to describe. The two men fool around on stage, acting out their physical dispositions and construct diverse types of characters. You don’t need to understand, to make an opinion, you just have fun. But the fun is not made with a click of the fingers, there are years of hard work behind it, as proved by the constantly laughing audience. Besides that, they both can do acrobatics, especially partner acrobatics, completed by their original comic expressions. Okidok thus became the most successful show of the Mime Fest and was rewarded by standing ovation. After this performance we did not hurried to see anything else, as the good spirit penetrated simply everything, a little detriment for the Georgian ensemble The Lilit Company and their Bluff. This simple story of time, mankind and Adam and Eve did not bring any new views of the world but the audience appreciated the fineness and originality of the movement – combination of mime corporel and contemporary dance. A fun fact – Georgia can boast the State Theatre of Pantomime and the Lilit Company’s Head, Luka Chkhaidze, is a permanent member. The festival comes to an end and there are just two days left, yet very eventful. The Friday morning, the company Mime Fatale presented its piece Push the Button to the pupils of the Svitavy elementary school. This computer “game-tesque” in the rhythm of beatbox hooked up the young spectators and proved to be a good way how to lure them into the theatre. In the afternoon, the Theatre Club hosted Pantomima S. I., a ensemble of hearing-impaired mimes, with the piece entitled Kupé (Compartment). The evening was reserved for the German mime tandem Alexander Neander and Wolfram von Bodecker excelled in the Tyl house. Their repertoire ranges from children plays to full-length dramatic pieces. To Polička they brought the programme Déjà-vu?, consisting of etude works of both artists. There’s something for every spectator, from poetic passages to comic sketches. The two great mimes will enchant you by flawless technique, acting skills, but mainly by the original story-telling. In every step, posture or look they express everything, without pronouncing a word and with incredible passion they have for the art. These masters of classical mime also got well-deserved standing ovation – a lovely end of the Friday night. 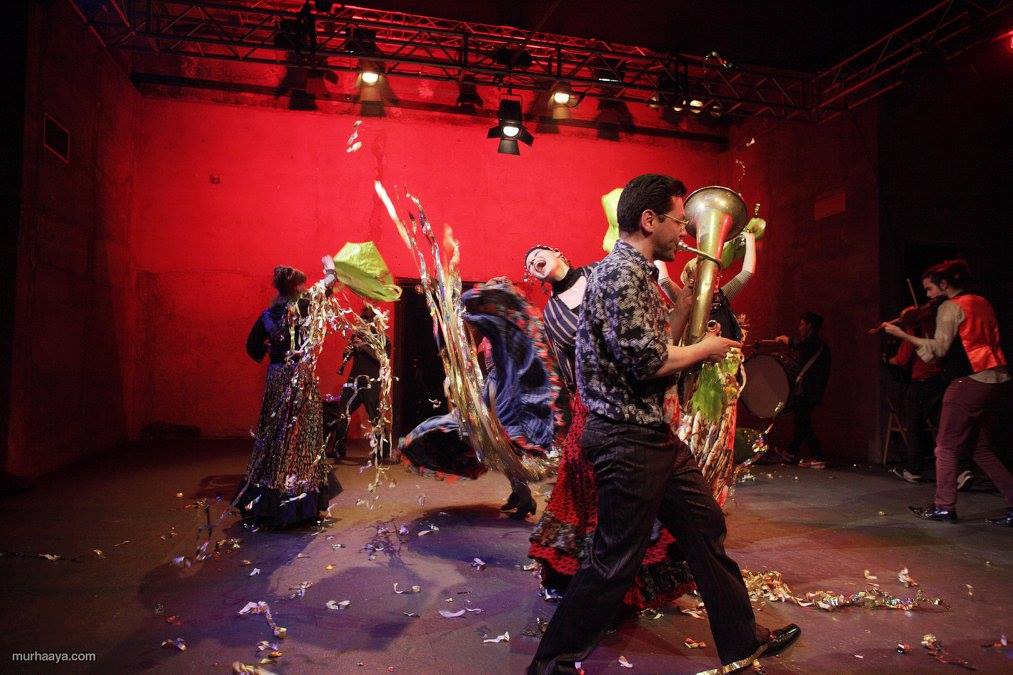 The Saturday programme was dominated by the Aleš Hrdlička’s magician show for children called WAA-BA!. The visitors then moved to the square to see Balkán (Balkans) performed by Mime Fatale and the Circus Problem band. Balkán is inspired by gypsy fairy-tales and quest for happiness, loaded with dance and energy. But the final scene of gypsy women choking on false gold and children starting to pick it up appeared almost scary, even more as it portrayed today’s society,. To the rhythm of Balkan brass band music, all the performers are leaving the square and give an impulse to the audience to return to the theatre. In the meantime, preparations of the Mime Evening are in progress in the Tyl house. The final performance consists of etudes of the Mime Fest’s participants and every year it is almost sold out. And what happens twice happens for the third time as well and so there comes the third standing ovation, followed by after party and buffet for all the artists and the public. The Saturday night resonated with Balkan rhythms played by Circus Problem. These guys let no one sit in the corner, the energy tornado goes on till the crack of dawn, and for the last time you can hear the tequila shots hitting the table with the traditional: “PO-LIČ-KA!!” Written from the International Festival of Pantomime Mime Fest 14 – 19 September 2015, Polička. Translation: Tereza Cigánková