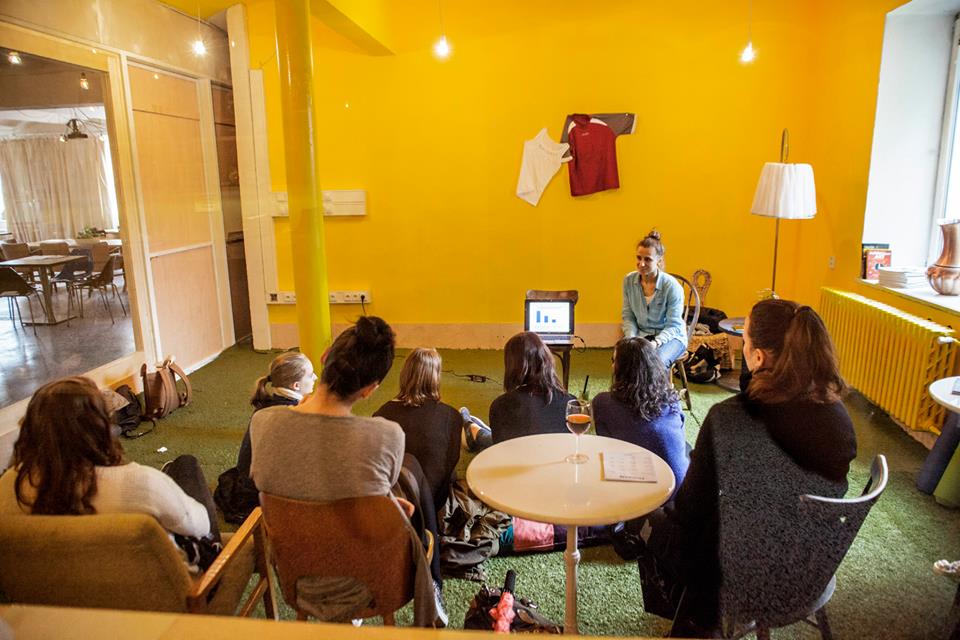 Move fest Ostrava is through its second day and it again brought many opportunities how to penetrate the mystery of moves and dance whether as spectator or active dancer. The hunt caught fire, took control over streets in Ostrava and swept even more new interested people who wanted to gain quality artistic experiences. Morning program of festival was comprised of Sára Puchowská’s workshop. This Polish dancer and teacher has been occupying with Pilates exercise and dancing medicine long time. Therefore, her workshop brought both practical and theoretical levels. The main topic of both parts was dancer’s body and ways how to take a proper approach to it. In the early evening, Sára Puchowská continued her morning workshop. In her lecture called Healthy body healthy mind explained issues of dancing medicine more in depth. She emphasized the fact that in the Czech Republic this field of study is still in its infancy and many dancers do not even realize that dancing medicine provides ways to a healthy professional and personal life. Puchowská started talking mainly about injury prevention (so often underestimated), the ways how to test dancer’s body and avoid its overstraining. Also she stated many concrete examples of injury and explained procedures in their treatments. Information was valuable for dancing professionals and also amateurs and was based on research results which Sára Puchowská has been leading within her work at HAMU (Music and Dance Faculty of the Academy of Performing Arts) in Prague. After the lecture, the audience was waiting for the second festival performance. It was a dancing deed called O (‘O’ ako Schlemmer) Reloaded of Slovak 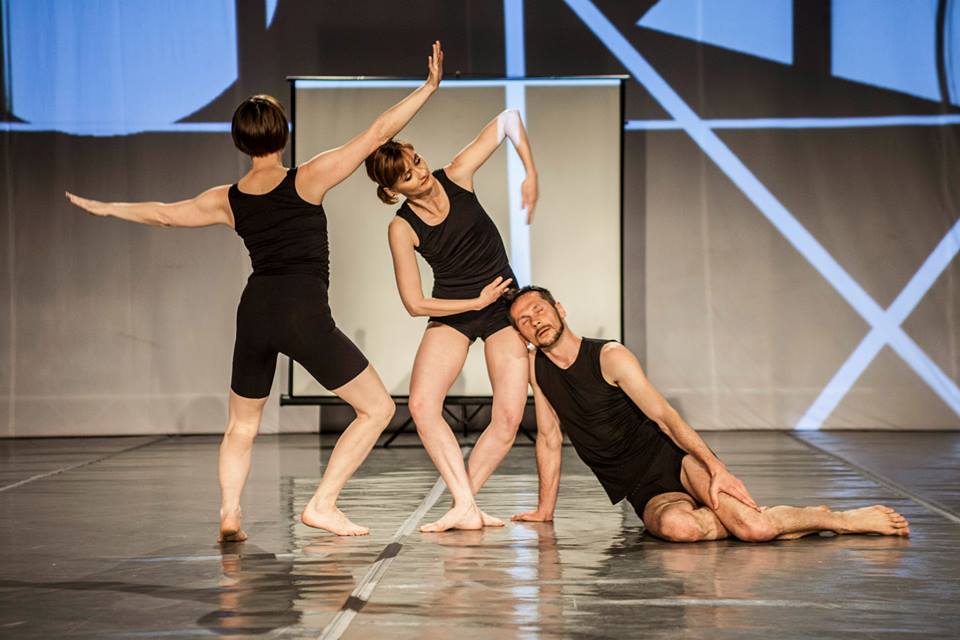 assemblage Neskorý zber. The evening surprise became (among the other areas) the area where this choreography took place. It was about a forgotten former Club of producing cooperative Alfa which is the pick of socialist architecture and it provided unexpected airy and interesting place for setting of choreographic composition. The creating of a performance ‘O’ ako Schlemmer was an initiative emerged from Slovak dancers and choreographers Monika Čertezni, Danko Raček and Anna Sedlačková. The main inspiration was the avant-garde art school Bauhaus which was connecting German artists of inter-war period. Bauhaus was a centre of architecture and design. Thanks to its ground-breaking techniques and artistic insight it inspired range of significant people. Neskorý zber dancers tried to integrate the principles of this school into their dancing exhibition – particularly the use of geometry, physical laws and mathematics. They relied on Oskar Schlemmera’s records which contain detailed definitions of artistic purposes of German school. On the stage, they interconnected their experiences, improvisational skills and their maturity (dancers were from forty to fifty years old) with these rules. The result was an original movement language which gave a blunt impression. On the other hand, the concentration and dancers’ intellectual immersion showed how thoughtful and deeply rooted really is. Movement on stage was accompanied by video projections that completed geometric precision of choreography. On the screen, there changed clusters of time, building photographs, definitions of Bauhaus and portraits of its main representatives. Also music accompaniment was reduced to the simple composition. The dance was accompanied by either a monotonous recitation of various sounds, words of dancers or absolute silence. 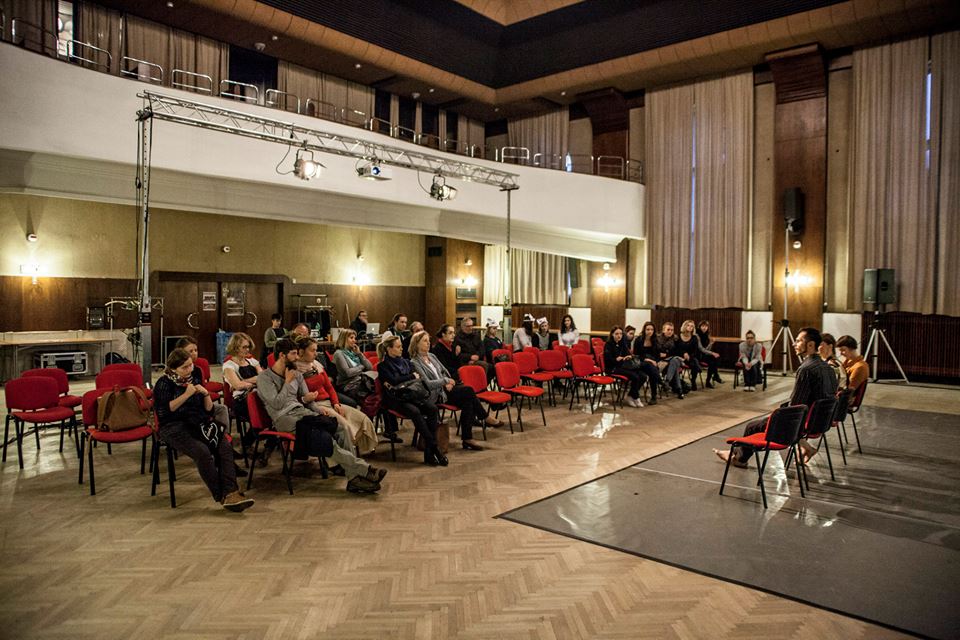 According to the spectators’ reactions, the choreography 'O' ako Schlemmer impressed each of them in different ways. During the after performance discussion it showed that not everyone is able to assimilate a highly intellectual approach to work with the body and space. The production is largely improvised but improvisation is carried out according to strict rules. These rules require the full artists’ attention and sense for detail. Despite mixed reactions from the audience, it is amazing how much energy and enthusiasm the dancers of Neskorý zber were able to transfer on stage. They managed to eliminate any concerns about the age and physical limitations and showed that experience means in dancing theatre sometimes more than technical perfection or stunning extent. In a very creative and inspiring spirit the next day of the festival ended. This day demonstrated how many shapes the contemporary dance art can have. MOVE fest approached its half and it is obvious it still has something to offer. 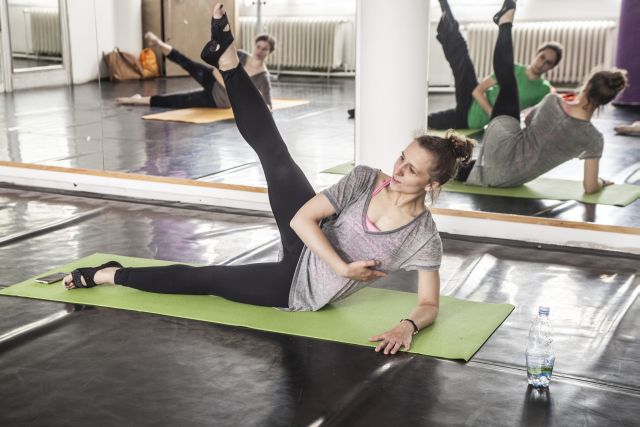 Deer jumps into the second half     It is said that with the third day the crisis is always coming. Fortunately, it is not case of MOVE Fest – its movement-tight programme rushes ahead by deer jumps. And it leaves stirring air behind it which is full of fresh choreographic ideas. So, what brought the third day of the festival? Again, the morning programme was devoted to Sára Puchowská who continued her Thursday workshop Dance Medicine 1. She initiated participants of her lesson even deeper into mysteries of the proper functioning of the musculoskeletal system. Lesson was oriented practically, the Pilates for dancers starred, but also theoretically, the topic was lower limb and a possible dance injuries. From Sára Puchowská’s pedagogical speech is obvious her extensive knowledge and experience in the field of dance medicine. Her lectures at the MOVE Fest are as the story of Alice in Wonderland for many professional and amateur dancers. In fact, they are accustomed to just use their body and force it to perform their best. They do not think much about how to listen to it and understand. 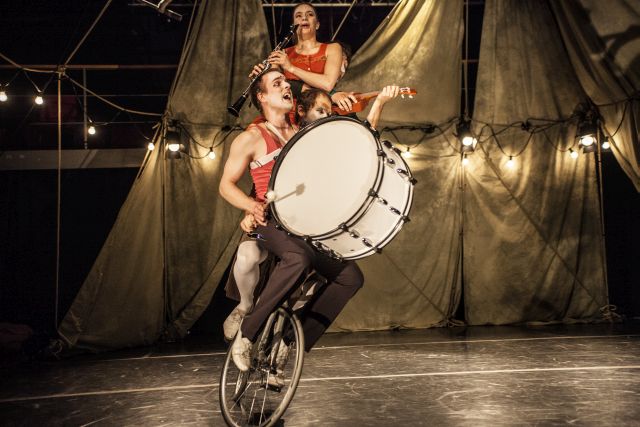 Friday festival evening attracted new circus performance Onnellisten Maa (Land of the Happy), who arrived in Ostrava from faraway Finland. The name does not divulge much from the content of performances but the tenser viewers could be. Sirkus Aikamoinen group, whose members were recruited from various schools and artistic areas, practised during Thursday evening and Friday morning in Cooltour. The preparation itself would certainly be worth watching. The stylized circus tent grew on Cooltour Nová scéna for the production of the Happy of the Land. It made do without heavy canvas or lavish colours Skeleton of fixed ropes, a few lights and a few pieces of material were sufficient for creating of desired impression. Light patina was omnipresent, like every previous performance imprinted into stage set. Everything breathed the atmosphere of the old nomadic societies, strange human fates, Nordic chillness and sense of bizarreness. The inspiration by Fellini movie The Clowns was noticeable but the creators of this piece make no secret of it. The performance began slowly and out of the blue. A girl in a bright red leotard, lying on the ground, started playing the shadow theatre on the front canvas of the circus tent. Gradually there began to join shadows of other figures when another acrobats went through behind the canvas. When the imaginary curtain opened, there appeared the mosaic of juggling, acrobatic and musical performances which we can see very rarely. Nevertheless the mood did not remind a glitzy circus show, in which we watch a perfect performance of artists and we are not sure whether they are machines or a human beings. In the Land of the Happy the mistake was a natural part of the scene - it seemed we watch the training of artists among circus caravans. One woman and three men went from one to the other circus disciplines, sometimes all of them did everything (for example amazing club juggling, where two pairs of jugglers mutually penetrated). Sometimes one of them focused on his masterful discipline and the others accompanied him on a musical instrument or singing. But if you think that music accompaniment was confined only simplified strumming or tapping, you're very much mistaken. Performers managed to play the incredible number of musical instruments (each of them at least two instruments), including drums, clarinet, accordion or ukulele. Sometimes there emerged the question whether their original artistic focus is really new circus or music (for example during an amazing solo drum set when the artiste-musician managed to juggle with several pairs of drumsticks at the same time). 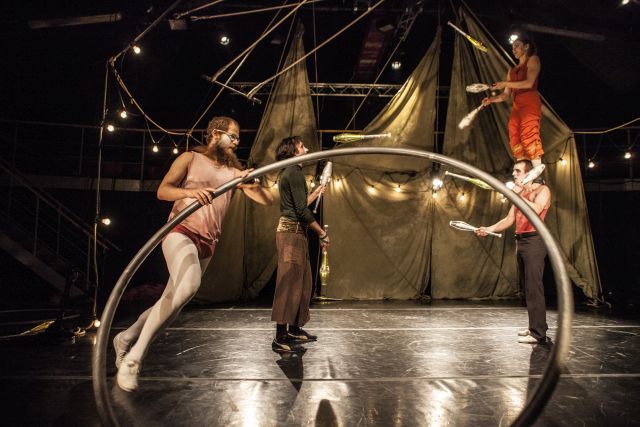 An essential element of the show was relaxedness and willingness to take risk with any result and also innovation in various new circus disciplines. Throughout the whole production it never happened that the artist came on the scene, just with a given exercise utensils, showed what he can do, and fled behind the scenes. Land of the Happy interconnected individual acrobatics or juggling performances by spoken word and short acting scenes. So the impression of artificial variety show did not emerge. For example, during bike acrobatics, gradually all four artists joined, they showed intricate exercises on moving bicycle and they managed to play musical instruments at the same time. Juggler performed "strip show" because he had all clubs hidden under his clothing, so there was no choice but to take it off, juggle with it for the moment and then throw it toward the enthusiastic audience. Just this spontaneous and positive mood which radiated throughout the whole performance astonished the audience. Sirkus Aikamoinen group was acknowledged by standing ovation and many viewers also joined the discussion that took place soon after the end of the show. Artists talked a lot about their journey to the new circus (there turned out that actually each of them initially did something completely different and they took the long way round to the modern acrobatics), about the difference between traditional and new circus, other projects, opportunities to study at circus schools abroad, about practise, injuries, obsession and desire to continue despite complications and setbacks. However, the third day of the festival did not end with Finnish new circus. Musical band Šmykňa performed in Cooltour café and it accompanied Lovecký candrbál. The real music persuaded even the most obstinate adversaries of dance. They demonstratively grasped the dance is beneficial to body. In the other words, when the music is playing, just dance. There are just two days until the end of the festival but these days will bring even more intense dance experience. So let's get started! Writer: Tereza Cigánková O (O ako Schlemmer) Reloaded Theme and interpretation: Monika Čertezni, Danko Raček, Anna Sedlačková Music: M. Burlas Ligh design and video: M. Piterka Sirkus Aikamoinen | Land of the Happy Premiere: Helsinki, April 2014 Direction: Maksim Komaro Interpretation and music: Sade Kamppila, Oskar Rask, Jouni Ruuth, Tuomas Vuorinen