If there is any piece of drama in the dance world that inspires creators by its emotional depth, captivating atmosphere, and tragic dénouement, it is the 1936 House of Bernarda Alba by the Andalusian poet and dramatist Federico García Lorca. Among numerous theatre adaptations, recent years have seen an award-winning Liberec version created by the choreographer Marika Hanousková, or Bohemia Balet version by Hana Litterová. For Josef Kajetán Tyl Theatre in Pilsen, the piece has been adapted by Anna Vita, a former dancer and until last season, the director of Mainfranken Theatre ballet. Though the original play is short, dance adaptations are often reduced to the mother’s despotism towards her more or less obedient daughters (and the rebellious Adela).

The power of interpretation lies in the impersonator of Bernarda. However, in Pilsen, the creators focused more on the daughters – their mutual relations and different characters. Their tragedy was not caused by the mere oppression but also by the toxicity of all-female collective. Anna Vita left out the conflicts stemming from the generation gap between the sisters. It is logical, considering the age of the ballet company members that would make this part of the story less authentic, though the character of the youngest daughter Adela (and Pepe to a certain extent) has been narrowed because their proximity of age would explain their behaviour. The opening scene of the Pilsen adaptation implied that the visual aspect and symbiosis with the scenography would be the strongest domain of the new premiere. Downstage is sitting the maid La Poncia, a woman of sharp features and tough gaze, upstage, at a long table covered with a black cloth is sitting Bernarda and her daughters – all dressed in black. Constrained moves and impressively angular port de bras accompanied the spectacular unveiling of the photo of the deceased father. Synchronised gestures also appeared in the duet of Bernarda (Nelly Danko) and La Poncia (Lýdie Švojgerová), who is closely bound to the house, though she is an external element, the only person able to confront Bernarda and defend the daughters. In the duet both dancers used elegant port de bras, so expressive in the small space of the Black Box. The scene evoked feelings of crampedness and suffocating atmosphere.

The scenography is geometrically simple – white empty rectangles represent the daughters’ bedrooms, the front door to the house and the balcony above – a place for Bernarda to oversee everything that happens inside and outside the house. In their bedrooms, the daughters’ characters are defined through subtle hints – less is more: touch of a shoulder, a look back, caressing a rose or a hostile look. 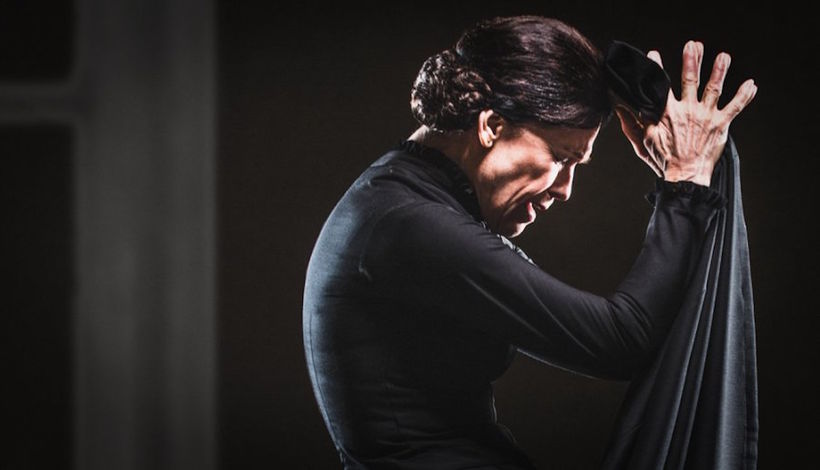 While in the play the girls stand against each other from the very beginning, here they resist together their mother’s oppression. They rebel against her, even if it is just a cheerful dance in the time of mourning. Only Adela dares to go further and puts on a colourful dress, which makes Bernarda very angry. However, Mami Hagihati presented Adela’s behaviour more as a careless or naïve gesture and less as an act of protest.

The arrival of the only male to the house isolated from the outside world foreshadows the upcoming tragedy. A handsome young man, Pepe el Romano (Justin Rimke) courts Augustias, the eldest sister (danced by the brilliant Abigail Barker who endowed her role with elegance, gentleness, and innocence). However, he is attracted to Adela, who seduces him during his gentle love duet with Augustias. To cast the company’s youngest dancer to impersonate the only male character on the premiere night was not a safe bet. Justin Rimke is simply not experienced enough to handle such a complex role. During the performance it was clear he focused mostly on his technique and his clueless expression was even more obvious with the audience sitting to close to the stage.

It was clear the Black Box was not an ideal space for a ballet performance. The shallow stage made the creators install dance scenes very close to the audience. Those who were not sitting in the first row could hardly see the dancers’ legs. Every interpretation mishap or less focused acting could be easily spotted – unpleasant feelings of forced overacting increased. But the movements were so exalted that face expressions were not vital for the overall impression. Anna Vita was obviously aware of the situation and most of her dance actions are based on the upper body movements, while footwork could not be even seen under the dancers’ long dresses. But she used a lot of floorwork which helped to spread the movement all over the stage and kept the choreography going. 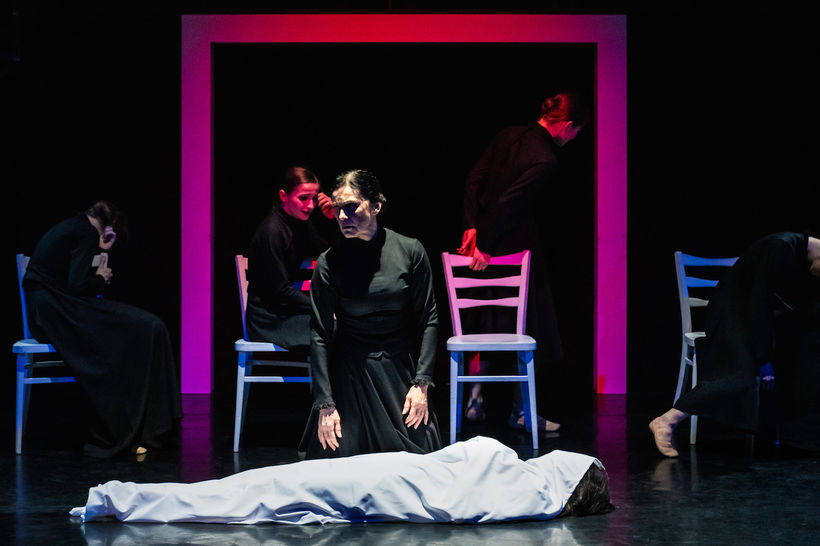 The music score (the choreographer opted primarily for Polish composers) helped to maintain the suspense throughout the whole performance. For the moment of gradation, though, Anna Vita failed to choose an appropriate musical accompaniment. Witold Lutoslawsky’s music (here Concerto for orchestra: I. Intrada) is, on the whole, really compelling, but on stage it clashes with abrupt plot twists, be it the naturalist fight of the sisters or Adela’s suicide. Her jump from the balcony was so quick (and not accentuated enough by a spot light or in any other way) that it lost its significance. Nevertheless, these imperfections were outbalanced by some truly positive aspects. Lorca’s drama is introduced by a note: “The poet declares that these three acts are intended as a photographic record.“ And that is what the creators managed to do, as each scene was extremely photogenic, the stage and costumes by Sandra Dehler perfectly defined the atmosphere and allowed for better use of the space. Except for the insecure Rimke, the female dancers perfectly matched their characters, especially Nelly Danko whose appearance and natural charisma raised respect without outshining her younger colleagues. Considering the nature of the piece, its success will depend on the expressive qualities of the alternating casts.

Written from the premiere held on 12 January 2018, at theBlack Box (Small Stage) of the JKT Theatre, Pilsen.