Commander – About Children Who Had Their Own Version Of Truth

Mid-June saw the premiere of the recent multi-genre project Commander performed by the Czech dance and theatre company Farm in the Cave. In fact, the title of the production represents the nickname of the leader of the neo-Nazi organization Feuerkrieg Division, which significantly participated in the online radicalization of children and young people in 2018–2020. When the Estonian security service revealed the identity of the mastermind of the network in 2020, nobody could believe it – it was a thirteen-year-old schoolboy, who led the extremist organization from his room. The shocking news made Viliam Dočolomanský, the head of Farm in the Cave, immerse in one of the most serious and darkest topics of our time. Dočolomanský has been dealing with socially engaged art for twenty years of the company’s activity. I can mention one of the most significant works in the current period of the Russian invasion of Ukraine: Sclavi – The Song of an Emigrant. The project Disconnected seems to be as apt as well in the postcovid times; it discusses the Japanese phenomenon of hikikomori, yet it could be easily applied to disconnection from real life in the pandemic years. In the landscape of Czech dance and physical theatre, Dočolomanský’s productions stand out with their distinctive adaptation and invocative format, thus they regularly defend their unique place on the map of the arts not only in the Czech Republic.

Commander consists of a dance/theatre production and a short film, the two-year project also includes tailor-made educational and preventive programs, focusing on the topic of the radicalization of children, by which the company exceeds the reach of the common artistic production by far. However, the stage version is not a mere retelling of a story of a little neo-Nazi boy. It is rather a deep probe into the mindset of the extremists and also an eerie excursion into the untangling of the multi-layer network of double meanings and allusions that tightens your throat.

Dočolomanský interspaces the onstage action with the screening on the hanging white prism, which seems to be levitating three meters above the center of the stage. Five dancers (Andrej Štěpita, Gioele Coccia, Nicolas Garsaults, Barbora Ješutová, Matuš Szegho) are accompanied by the brass duo (Štěpán Janoušek, Šimon Janák) with Hana Varadzinová as a beatboxer and commentator. The choreography features typical items of the motion scale of Farm in the Cave. It is characterized by muscular tension in the whole body, short and abrupt motion at a dizzying speed, repetitive motion layers, where the motives of control and pliability are developed, distorted lines of the body in numerous joint folds, and concentrated and compressed energy that explodes nearly every second. Dancers’ bodies work as the instruments in the orchestra, whose perfect concord intensifies the emphatic physicality of the event. Moreover, Dočolomanský weaves numerous various props in the structure of the work – from fishing rods to ice cones and fake weapons. All objects have their specific meaning, which is developed in the production and helps connect the distant images.

Although film intermezzos seem to last a shorter time, their energy easily matches and sometimes overwhelms what is going on. They usually look like chat rooms, where the authors present real dialogues between the extremists. “You see more things than they do. The shit is their system. You and I know.”

In the second part, the short inputs develop in the film, the literal embodiment of evil. Dočolomanský performed an essential trick, which makes the topic digs deeper under your skin. The dialogues of child actors contain something you would never expect from a child. They share extremist opinions as if they were talking about what playground they are going to. They do this calmly, with no bigger excitement or uncertainty.

It is undoubtedly one Commander’s strongest moments. The power and urgency of verbal comments exceed what is going on by far. It is too fragmented, the scenes are rather identical because they have similar timing, dynamics, and style of motion. The physical expression pays a penalty for being unspecific, Dočolomanský fails to benefit from the richness of non-verbal expression as we know it from other productions (the similar production of Whistleblowers from 2014 comes to my mind). I think this is unfortunate. If the author managed to create two equal parts, Commander would easily rank among the best (and most impressive) what has been created in Czech dance recently.

Written at the premiere on 13 June 2022, DOX+ Multifunctional Hall. 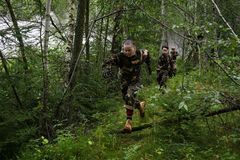 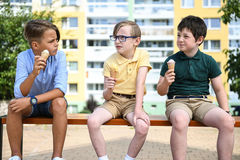