The ballet company of Paris Opera opened the new season with a daring premiere entitled Cri de cœur (A cry from the heart). The title is very fitting: the work puts on stage liminal situations, we do hear a lot of outcries. The dancers talk a lot, and they often talk from the heart. But they also dance from their heart, using their own movement language, borne out of improvisation. It seems that both talking and improvisation are rarely seen on the Palais Garnier stage and thus, it is a tough one for the local ballet audience to get their heads around Norwegian artist Alan Lucien Øyen, author of the choreography and script, works - self-admittedly - in the spirit of Pina Bausch’s Tanztheater. The former dancer of the Norwegian national contemporary dance company Carte Blanche and founder of the interdisciplinary company winter guests, Øyen often employs everyday gestures and expressions, the spoken word, seemingly nonsensical juxtaposition of images and fragmentary structure. However, the spoken word takes a much more prominent position in Øyen’s work, not only on stage, but also in the rehearsal process. The programme booklet of Cri de cœur reveals how he spent the first three days of rehearsals simply talking to the 38 dancers in order to get to know them, their personalities, interests, fears etc. This was not just a moment of conviviality, but also part of the creative process since pieces of their stories were incorporated into the script, which was continuously under review. The same could be said about the choreographic process, in which the choreographer invited dancers to create their own material based on the words and stories shared. The spoken word was the first stimulus in the collective creative process which aimed to open the windows of imagination for the dancers to create the situations and movements.

From the beginning of the choreography, dancers come and go, exchanging words and gestures, or partake in longer monologues sometimes accompanied by movement, sometimes not. The solos expressed more the individual style of each dancer, for example using big leg extensions followed by an abrupt break of the pose, sharp nervous transitions, or more flowing movement of the limbs. When in groups, the dancers found a common flow, with a lot of arm gestures (as if they were trying to develop  their own sign language), and occasional lifts, but we almost seldom saw unisono sequences. Often, these movements were sharp, staccato, in opposition to the lyrical, legato tones of the music. The dance sections alternated with more acted scenes, which employed everyday movements and gestures.

Aside from the personal, almost random fragments, the piece also carried an overarching storyline which revolved around the theme of death, disease, and the dysfunctional relationships within a family. During the piece, we encounter a girl ill with cancer (Marion Barbeau), her mother with whom she has a complicated relationship (Héléna Pikon), and her mentally distressed brother, who also clashes with the mother but is still dependent on her. Then there is my favourite character of No-Body, whose name offers endless possibilities in terms of wordplay and imagination. When talking to the mother on the phone, Marion’s lines such as  ‘No-body is here’, ‘No-body cares for me’ come out as frustrated outcries, but for the spectators the situation is more ambiguous, because the physical presence of No-body cannot be denied. This ‘phone-call scene’ was one of the most touching moments of the piece for me.

Øyen says he is obsessed with death, which appears in all of his work; and yes, death is present, but not as something which is scary or even sad, but more often as a fact we can meditate upon. Despite the fact that the piece does contain a few sudden and quite violent murders, the atmosphere is otherwise more melancholic than dark. This obsession also comes through in the choreographer’s sources of inspiration: for Cri de cœur, for example, he took inspiration from Paul Kalanithi’s posthumously published book When Breath Becomes Air (2016), which documented the progress of his own deadly disease. Furthermore, taxidermic dioramas inspired the visual – and surely also the conceptual – dimension of the piece. Typically, dioramas appeared in natural history museums showing a (dead) animal in a setting, partly painted, partly with real objects, which resembled its natural environment. In Cri de cœur, the audience watches the dancers in their ‘natural habitat’, but not only there. Big frames, reminiscent of tableaux in museums or cinema screens, continuously roll on the stage to literally frame the scenes that change in rather fast sequences. A living room, bedroom, dining hall, theatre foyer – all appropriately furnished – alternate with painted backgrounds of mountains, forests and deserts, which resemble more closely the dioramas. In these sets (by Alexander Eales), the dancers perform their roles, as humans and as animals, but also as themselves, or all three at the same time…

The interplay or ambiguity between real life and fiction – between true and false – in  theatre is another theme that fascinates the choreographer, and he plays with it on several levels. He puts it in the dialogue that the dancers perform, making them doubt (apparently) what is a true exchange between two people, and what is pretence or performance. The occasional use of hand-held camera offers another view of the dancers: the audience sees them on stage, but they can also see their face in detail, projected on the screen above and around the stage. However, while the real-fake aspect of the arts is indeed fascinating, pointing this out in dialogue somehow lessens the intrigue, and almost sounds banal. There are simply moments when words are not enough, or, rather,too much, where they cannot do a situation justice.

Words dominate the piece, and while they can have a lot of power, and it is also very impressive that the Paris Opera dancers master this (for them) new discipline so well, it remains doubtful how much they expand the perception of the movement, which seems to be the choreographer's aim. Most of the time, dance appears supplementary, decorating the scene, but not acting as the main carrier of expression. Recalling the piece in my mind, the movement part is blurry, except for a few moments that reminded me of other choreographies (e.g. a sequence where a group moves unisono on demi-points, like in the recent Fauns by Sharon Eyal). Perhaps it’s the character of movement, which – having emerged from improvisation – is more turned inwards, full of small personal nuances, gestures and expressions, which are hard to detect at a distance from the large stage. Although, it must be said that in the second half of the show, dance – especially in group scenes – took on a more prominent position and intensity, stirring the bodies in the auditorium as well.

However, the images of the scenography, the warm lights (Martin Flack) and cosy costumes (Stine Sjøgren), remain imprinted in my mind. They created a calm, old-school Nordic vibe, designed in 1950/60s style and warm colours – a kind of vintage ‘hygge’. This cosy, melancholic atmosphere was crowned by the cinematic soundtrack (Gunnar Innvaer), consisting of many familiar sounds and melodies, but the programme note did not reveal their origin.

Finally, certain individual performances did stand out. The imaginary spotlight shone on Marion Barbeau as she expressively embodied the sick girl, fragile, depressed, fighting and surrendering. Her dance often featured transitions from large extensions of her limbs and whole body into curled-up positions; when acting, she could be very urgent, especially when trying to communicate with the mother or other characters, and other times she was stunningly calm, stoic, or defeated. This première danseuse is also an actress, who became recently known to cinema audiences thanks to her leading role in Cédric Klapisch’s film En Corps, with choreography by Hofesh Shechter. But the real star appearance in this piece was Héléne Pikon, a member of Tanztheater Wuppertal since 1981, and the dancer who took over the role of Pina Bausch in Café Müller after the choreographer’s death. The presence of this tall woman, wearing a long coat, dress, and heels (oh so symbolic!), was indeed electric, even if her performance was rather minimalistic – limited to walking, everyday gestures, and monologues. Although she always remained calm and composed, she radiated a silent power and superiority over the rest of the dancers (which was indeed her role, but probably also part of her own personal charisma).

As an ironic nod to the strict hierarchy of the ballet company, the Norwegian choreographer only gave body mics to some dancers; others had to hold a handheld microphone when speaking – and when doing so, they explained that they are ‘just’ in the corps de ballet. However, body mics were in fact distributed according to the amount of text, irrespective of whether it was performed by a première danseuse or quadrille.

Paris Opera is one of the houses that constantly pushes the boundaries between ‘ballet’ and ‘contemporary dance’, inviting contemporary choreographers (e.g. Anna Teresa de Keersmaeker, Crystal Pite, Alexander Ekman, Sharon Eyal etc.) to try out their approaches to dance on a large company. Often, these encounters are successful (notably Body and Soul by Crystal Pite, or Hofesh Shechter’s double bill, both presented last season), opening up new horizons for the dancers and their audience, which– I believe it is fair to say – is more conservative than those of the smaller, alternative venues. However, the boundaries are still there, and Cri de cœur, with its fragmentary form full of words, slow dynamics, and almost three hours in length, probably approached the limits of bearability for this big house.

Written from the performance of the 21 September 2022 in Palais Garnier. 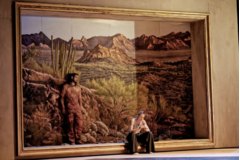 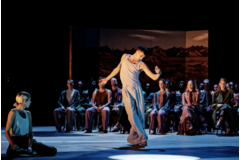 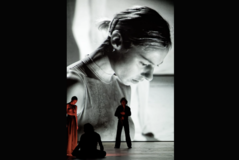 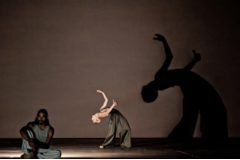 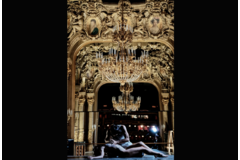 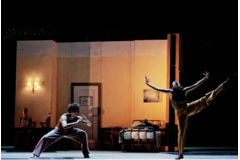