Emergency dances I. – Controlled by media, power and helplessness

Art mirrors its time. Artists reflect - be it consciously or not - what surrounds them, concerns them and disturbs their sleep. Joining the dance activism movement, the series of performances entitled Emergency dances (created under the auspices of the Tantehorse collective) gives space to emerging artists to express their views. The first evening of the series drew attention to the destructive role of mass media in today’s society and presented two very different pieces. Jáma Lvová (Lion’s Den) by Johana Pocková and Sabina Bočková is literally an attacking show about media manipulation and power, during which the audience get manipulated, too. In Denisa Musilová’s choreography Ententiky, the dancers are more introverted and immersed in their thoughts. The author aimed to explore the impact of information overload, media pressure and stressful situations on an individual who can consequently develop a mental disorder. Pocková and Bočková dressed in men’s suits evoke TV presenters. The two women stand almost still on their spots, only slightly rotating their shoulders in reaction to monotonous music. Their repetitive moves and gestures are getting bigger, accompanied at times by eloquent face expressions. They hypnotize the audience, abruptly changing the mood and the atmosphere, their actions resembling cheesy TV shows, catwalks, and military exercises. After that they calm down and rest, lying peacefully on the floor, breathing out loudly into a megaphone and singing the same phrase over and over, probably referring to the state of addiction (though the meaning of this scene is not fully obvious within the context of the piece). You know they are being manipulated the moment their arms intertwine around their heads and they resemble puppets controlled by someone standing behind them.  He (or she) forces them to kiss, to move in space – a very impressive moment that gives you chills. The finale is rather surprising, too. One of the two equal females (who double their onstage actions and thus make them look more powerful) is sexually taken advantage of by the other. It is expressive and suggestive... like walking into a lion’s den. 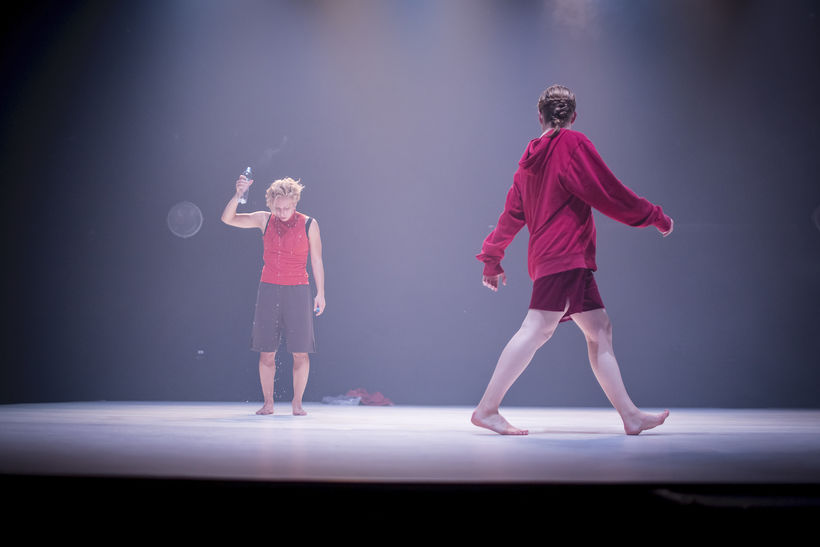 In Ententiky, Denisa Musilová intended to expose the dancers to stressful situations. Both performers (Anna Benháková and Iveta Krmelová) had to run to Palace Akropolis from two different places, seven kilometres away from the venue. The start of their run was live streamed in the theatre lobby. The stream, however, could be easily missed in the crowded space and later it seemed baseless why the two girls needed to change right after entering the stage. The structure of Ententiky, like Lion’s Den, is based on repetition. In relatively regular stretches of time, the same dance passages and episodes recur. Circularity and impasse, the leitmotifs of the piece, were expressed by running in circles and suicidal balancing on the edge of the stage. However, the dancers’ movements were much more abstract and dance combinations allowed for multiple interpretations.  The reference to media overload only manifested itself in short and muffled samples of (mostly) political speeches (we could hear the voices of Adolf Hitler, Stalin, Nelson Mandela and Miloš Zeman) and in blue light coming from the backstage and evoking a TV set. The main message of the whole piece was rather blurred, anyway.

It was clear, though, that dance possesses a great potential for activism. And that aspiring choreographers have much to say.

Written from the première held on 25 September 2019, Palace Akropolis, Prague.