Insectum in… Prague – Movement Goofing Around from an Insect Perspective

TANEC PRAHA 2022 festival is in full swing and this year's programme includes its co-production with OperaEstate Festival Veneto. It was created during the covid pandemic, when Tereza Ondrová and Silvia Gribaudi met through the screen and collaborated on a joint project, Insectum in...Prague, which they presented as a work in progress in 2021. Its theme was the idea of what life would look like if we looked at it from the insect's point of view. Now the performers came together on stage, they did not realize their intention at a distance, but stood side by side, which allowed them the intended physical interaction with each other. Both names are not unfamiliar to dance fans. The dancer and choreographer Tereza Ondrová has long been associated with the VerTeDance company, where she has participated in a number of acclaimed productions. She has also received international nominations from the Total Theatre Award and the European Aerowaves network, and her performing skills earned her recognition as Dancer of the Year 2010. Together with director Petra Tejnorová, she founded Temporary Collective five years ago, where she creates original works. Her colleague Silvia Gribaudi introduced herself to the Prague audience in the previous edition of TANEC PRAHA, when she presented her mischievous dance show Graces. This full-figured, short-cropped brunette in her prime doesn't worry too much about anything, as we can judge from her last year's mischievous escapades, which she reprised in a much more sober style in her new production Insectum in...Prague. The flyer for the show states that its concept is taken from Sara Michieletto and Elisabetta Zavoli. But one can only guess whether in their case similar questions were directed to the audience as in the current case in Prague, at the Ponec Theatre.

Ondrová and Gribaudi snuck onto the stripped-down stage area from the auditorium, where they had one of the audience members tap the microphone, which Ondrová put to a bug crawling randomly on the floor a few minutes later. From the beginning, the stage proceedings were underscored by birds chirping, the performers parading around in shirts, black shorts, socks and half-boots. They gradually shed their clothes, baring their chests, covering them with their arms, and in the finale they remained in their underwear, talking and gesticulating more than dancing. They asked, for example, whether we could recognize insect species, their age, distinguish their sex and colour. They also asked, “Do you have a favourite insect?”

Gribaudi delivered the questions in English, not waiting for an answer each time or purposely demanding action from the audience. When no one responded, she smiled and walked away, arms outstretched, saying: “Welcome.” She tried to use her body to fulfill the notion of being a praying mantis, a dung beetle, a butterfly, or God knows what other vermin... She offered the possibility of wherever we might figuratively relocate eyes, ears, or other sensory organs on our bodies. Ondrová occasionally translated something and engaged in movement actions in which she more or less fulfilled the assignments of her “commander”, her dance partner. 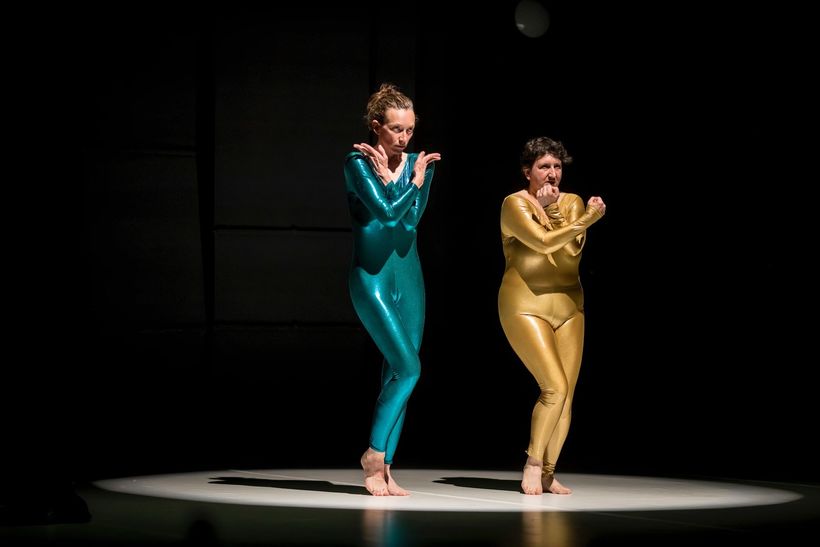 The chaotic shooting of limbs in all directions, the lunges into poses reminiscent of simple exercises, and finally the vibrating of almost all the body's bends and folds, together with Gribaudi's big belly shaking, made me smile. The antics took on a new dimension when the song Sweet Dreams of Melody by Annie Lennox and Dave Stewart came into full swing and the performers changed into shiny tight unitards. Quickly executed grands pliés were interspersed with full-torso undulations, which Ondrová controlled superbly. Antonio Vivaldi's melody (Allegro from the Spring Sonata from the Four Seasons Violin Concertos) did not lead the authors to any major changes or ideas. The turning off and lighting of the spotlights introduced some sequences layered on top of each other without a directorial and dramaturgical concept with a more profiled relationship between the performers themselves and their flirtations with the audience.

Insectum in...Prague is currently presented with the subtitle work in action, which could also be taken as a kind of “apology” when the hour-long performance shows signs of randomness and the improvisation lacks a more progressive development and a more solidly built climax. That is an invitation to the seated audience to rise, fly like insects and fly away with the performers who ended their antics in front of the Ponec theatre among passing cars.

The play on the insect community ended without any visible ambition to bring anything more sophisticated than relatively uninteresting movement passages and a distinct attempt at communication, not fully accepted by the audience. Anyone who would have thought of Čapek's play The Life of the Insects in connection with the given theme must have forgotten it very quickly, because a more sophisticated interpretation and conception was not forthcoming. And so I believe that the presented concept would work well in a closed dance and movement workshop, where those interested in the insect theme would drop their inhibitions and, if the lecturers provided them with a safe space, they would really, really enjoy the insect perspective on life and the body.

Written from the premiere on 8 June 2022, TANEC PRAHA, Ponec Theatre.