Kreatur: When raw emotions get scary

In the awkward post-lockdown situation, nobody would expect Tanec Praha to programme choreographies by Pina Bausch and Sasha Waltz. And though the festival saw the works of the two prominent female choreographers performed by Czech dancers, the western influence was strongly felt! One of the final highlights of Tanec Praha 2020 was the Prague premiere of Sasha Waltz’s choreography Kreatur performed by the 5th and 6th grade students of the Duncan Centre Conservatory. Jiří Bartovanec, a member of Sasha Waltz & Guests, passed this physically and mentally challenging piece on to the young artists in just a couple of days. In a series of brief scenes, the work addresses themes such as the weirdness of today’s society, a human and his body (isolated or attached to a community), and relations between men and women. The dancers’ movements epitomized such essences as power, force, dominance, weakness, control, submission and help.

The opening part tells about the strength of a community and an individual. Wearing only nude underwear, the dancers expose their naked upper bodies; the girls are hiding their nudity in the arms raised to their chests. The bodies seem to be getting electric shocks – at least it is evoked by their movement. They stay close together, only to break away from each other in a span of seconds to connect with somebody else. The performers keep on entering and leaving the stage. The mayhem on stage generates tension, especially when someone is going through an emotional outburst or a calming phase.

The choreography seems to produce unsettling feelings. At one point it features long transparent plastic panels behind which the performers’ silhouettes get blurred and multiplied, an effect that perfectly fits the overall atmosphere. The first part closes with a solo dance of one of the males who is experiencing an emotional and physical catharsis (behind or outside the panel), accentuated by his striking moves and inner tension. His testimony feels almost scary. 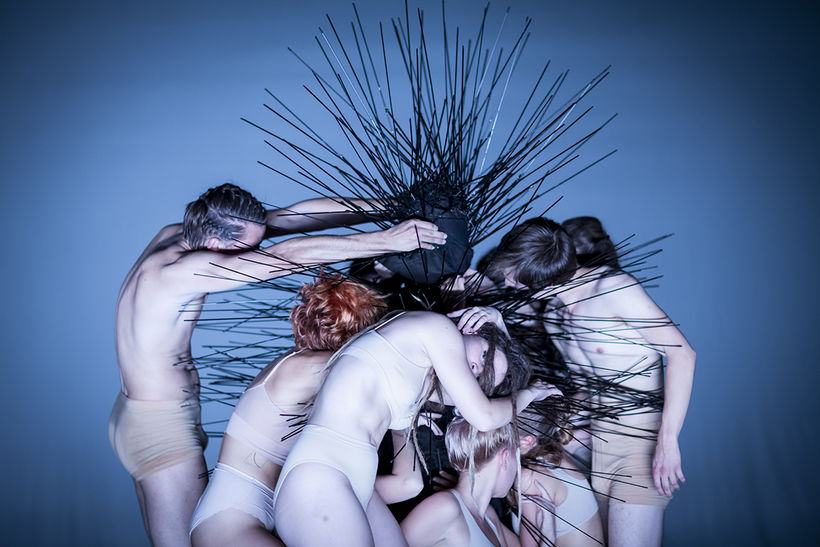 In the second part, introduced by an abrupt light change, the dancers are clad in black attires. Larger communities split into smaller groups – it is when an evil force, a porcupine figure with needles on its chest and back, is ready to attack. It targets women and stabs them with its thorns, dance with them, rapes them, embraces them… The surprise is that after they remove its head, it is revealed to be a woman… There are many such small or bigger surprises in Kreatur. All characters are carefully crafted, representing specific qualities and telling individual stories. Each of them gives a personal and convincing testimony and thus gets deep under our skin, so we even forget to breathe for a moment. The original version features unconventional costumes (here we could only see simple black undergarments and bras) and colour lights which did not play a key role during the Prague premiere. However, he contrast between the skin and the black colour remained. Neither did the Prague version have a staircase which is part of the original production.

The students of Duncan Centre offered a high-quality theatre experience. They convinced the audience by their authenticity and respect to the piece itself, as they handled the task with maximum honesty and delivered a breath-taking performance. At times, the lack of stage experience was obvious as well as some minor mistakes, but the final result was more than satisfying. Most of the cast members are very talented artists and this experience can help them secure their position in the world of professional contemporary dance. I hope there will be more performances of Kreatur so that this extraordinary work can be shared with more audiences.

Written from the premiere held on 26 June 2020, in Ponec theatre. 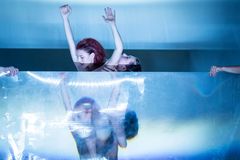 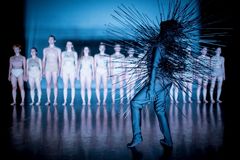