The Czech audience knew the Korzár (Le Corsaire) ballet only as a duet (or trio) staged at ballet gala concerts or dance competitions. The 165-year-old piece started to return to West Europe after a long break in the second half of the 20th century. It is not a surprise as it is a product of late ballet romanticism relishing in adventures and exotic locations to the detriment of coherence. The ballet, inspired by George Gordon Byron’s poem, was created by composer Adolphe Charles Adam, librettist Vernoy de Saint-Georges, and choreographer Joseph Mazilier. It was rather common that other shows and new choreographic approaches have been contaminated by music revisions and additional acts by Cesare Pugni, Ludwig Minkus, and Riccardo Drigo. The current staging in Ostrava adds yet another music variety by French composer Joris Barcaroli. I dare predict that this musical version will finish its journey with the last performance of the production in Ostrava.

The Czech Republic saw the full-length production of Le Corsaire in 2005 at the National Theatre Brno with Vasily Medvedev’s choreography. Jiří Pokorný prepared another production in 2019 for the ballet company in Pilsen. Both productions were rather traditional. However, ballet in Ostrava decided to try something else. They usually offer a new and original interpretation of 19th-century ballets. This approach was successful with Coppélia with Giorgio Madia’s choreography, however, it failed with Le Corsaire.

Let us state at the beginning that Le Corsaire is rightly not an integral part of the repertoire due to its questionable libretto. And when the theatre decides to stage it, the attempt to come with a significantly different interpretation seems to be a logical solution. The theatre in Ostrava decided to approach a French team. Choreographer Michel Bejar and librettist Céline Barcaroli integrated a rather loose inspiration by the original ballet, they shifted the story and changed the nature of some characters. The distinctive music revision was motivated by the small orchestra pit in the Jiří Myron Theatre, which can sit about forty players. The orchestra reduction was the concession to a bigger stage, compared with the Antonín Dvořák Theatre in Ostrava. 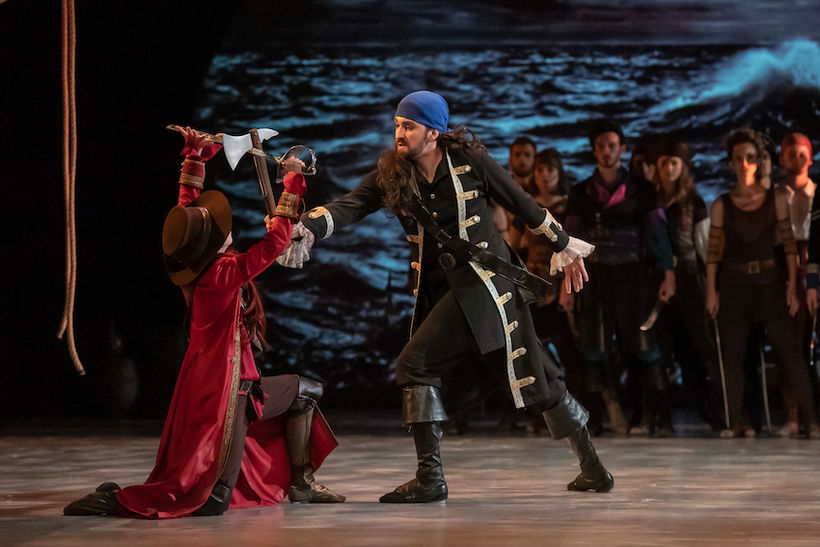 The beginning of the ballet is rather promising: there is a singing quintet reminding us of a musical show entrée. They sing about the life of a corsair, whose destiny is the water element. However, Barcaroli’s music then turns into the bland musical filling, in which a memorable music motive is played in repetitions from time to time. There is no major conflict with Adam’s romantic score, although we could hear some dissonances.

It is rather challenging to understand what Le Corsaire in Ostrava is all about. When I read the synopsis in the brochure after the performance, I was truly surprised at what I was supposed to see. In hindsight, I hesitate to what extent the librettist and choreographer took their ballet story seriously or whether it was a hyperbole combined with parody. I will not deal with what the production team claims to have done but I will focus on how I “read” the story.

The first “bad guy” on the stage is captain Le Fol, who ostentatiously limps and crosses the stage with difficulties. He does not mind that in dance challenges, does not have any problems in jumps and partner dance when the “immobile” leg is surprisingly flexible support for him. His life ends shortly after he is attacked by La-Mort-Rouge (who is also hidden Medora), who arrives with her company on a ridiculously small boat.

The fight between captain Le Fol and La-Mort-Rouge would nicely fit in any mocking production of the Jára Cimrman Theatre. It is judicious and naïve, there is no riveting fight for life. Two groups of enemies in the back make even less active staffage. Le Fol is killed and I start to think about who La-Mort-Rouge is. It is apparently a woman, I assume, only until the girl Gulnara starts to express her feelings towards her. Is there a lesbian theme? Or did the authors think about a transgender subtext? This is my question at the second premiere when Gulnara played by Laura Moreno Gasulla falls in love with La-Mort-Rouge played by Rita Pires who is a head shorter and plays a man. I learn in the brochure ex-post that the authors were inspired by 18th-century female corsairs. They state in another text that they wanted to achieve gender equality. I think, however, they added just more confusion to the original complicated libretto. 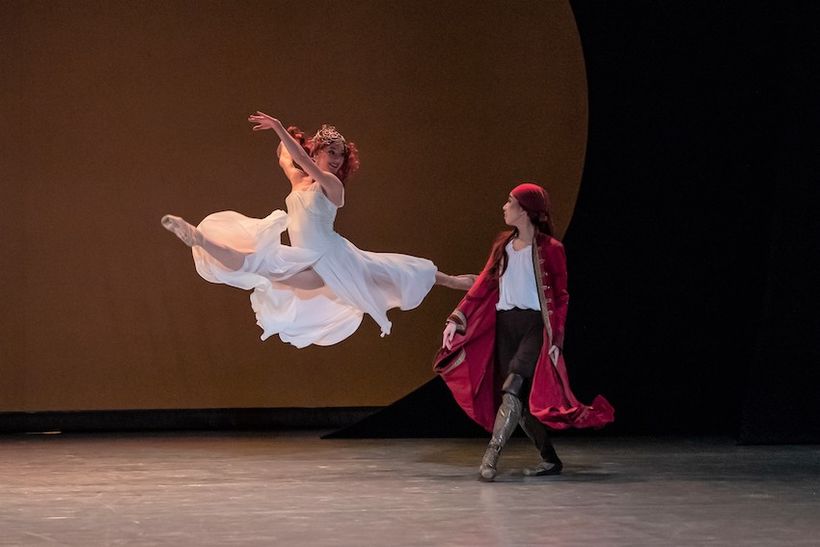 But let’s move on. A large hanging piece of cloth comes down from the fly loft and two girls dance behind it as shadows most of the time, whereas La-Mort-Rouge stays in the front. I learn only from the brochure that it is the crucial scene when La-Mort-Rouge remembers her sister Cassandra who was sold as a slave, which was the main motivation for her to sail the seas disguised as a male corsair and liberate the slaves. The clumsiness in directing has probably the greatest influence on the misunderstanding of the story told.

In the second part, La-Mort-Rouge, who is now officially Medora, along with Gulnara, is taken captive by Prince Conrad. According to the screening, we are probably somewhere close to Gibraltar, but David Bazika’s general stage set with a dominating globe does not tell us much more about the location. The theatre-makers seem to keep reassuring me this is a parody. The captives are brought to the stage by guards who refer to the early stages of human development from the ape as they are prominently underhung and have hunched bodies. The members of Prince Conrad’s retinue reminded me of Kazisvět’s dull soldiers from Princezna se zlatou hvězdou na čele (The Princess with the Golden Star). With the aid of women from the harem, Medora and Gulnara do not have any problem overpowering them by punching them in the metal helmet. The fun does not last long and mischievous Lankedem shoots Gulnara, who protects Medora. Then they start playing seriously again and mourn over their friend’s death. But the final act changes everything again. Medora or La-Mort-Rouge stands in front of the globe along with Prince Conrad, whereas characters who appeared in the story before and are supposed to be dead emerge in the back. Moreover, they start to pat each other on their shoulders and create a tableau vivant as a conclusion of the production.

The dramaturg and director fail in the basics – the ability to clearly tell a story. Michel Bejar does not have anything to offer in choreography, which is a patchwork of ballet clichés. There is a desperate lack of dance ideas. 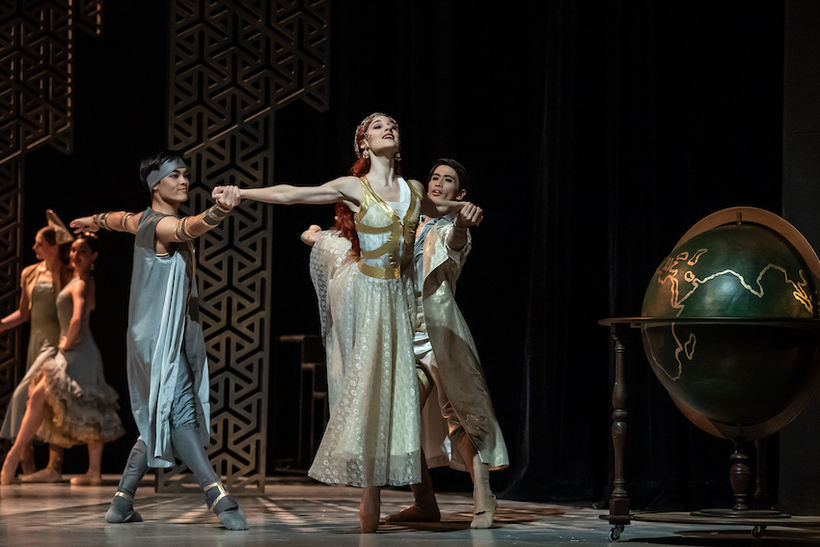 The ballet company in Ostrava has now many outstanding dancers, yet Le Corsaire does not provide them with many opportunities how to translate them into believable roles. Shino Sakurado and alternating Rita Pires as the main character La-Mort-Rouge, or Medora, have excellent technique and charisma, yet their behavior in key moments is unlikely. The distinctive and one of few believable characters is Lankedem played by demonic Rei Masatomi, who fills the stage with energetic jumps and vigorous gestures.

Ostrava ballet directed by Lenka Dřímalová ranks among the most progressive companies in the Czech Republic. The short pieces by top contemporary authors like Itzik Galili, Johan Inger, Jiří Kylián are leveled up by feature pieces, such as Mario Schröder’s Chaplin or Youri Vámos’s bold Sen noci svatojánské (The Midsummer Night’s Dream). The adaptations of famous ballet pieces were quite successful – Popelka (Cinderella), Don Quijote (Don Quixote), and the above-mentioned Coppélia. The choice of Le Corsair was risky from the dramaturgy point of view, the choice of the production team was a mistake. But as the proverb goes: We all make mistakes.

Written at the first and second premiere at the Jiří Myron Theatre on 16 and 18 September 2021.