Have you ever secretly hoped in living your own American dream? Miřenka Čechová’s new piece will bring you back to cruel reality. The performer who has managed to establish herself as an artist overseas, reveals the other side of the coin, through the character of Mckenzie Tomski. Her Miss America speaks about loneliness, separation from the family, inability to adapt in a new country where you are always a stranger and finding balance between your real self and the desired or expected self on the long and winding road to fame. She shows New York as a pulsating, noisy, fast-living city, where thousands and thousands of hoping artists struggle like rats to live a better life.

Čechová transformed her feelings not just into a performance, but also into a book of the same name, which is to be released this June. She seems to be full of impressions and having much to say, so maybe that is why this time she opted for language as the primary tool of expression and movement becomes more of a supporting element. Čechová raps and slams her thoughts, switching from Czech to English. Thanks to intense collaboration with the rapper Martin Tvrdý, who has participated as a musician in Spirfire Company’s previous creations (Konec---člověka, doba z druhé ruky, Constellation II.) she was able to supress the accurate diction of an actress. In colloquial Czech she sounds convincing.  She is real, pure and has something to say, which is crucial in this style of music.

Even though she plays and experiments with genres not typical for her, she does not hesitate to use well-proven features. Like in her solo S/he is Nancy Joe (2012), comics and animations come to life on a projection screen, this time with photographs of the big city taken by Vojtěch Brtnický. The hour’s performance is set in New York subway. The life journey of McKenzie Tomski is symbolised by her transport in a public transport vehicle, where station announcements divide individual scenes and songs. The empty stage is decorated by a metal pole and a chair with wheels representing a seat Čechová is repeatedly taking. 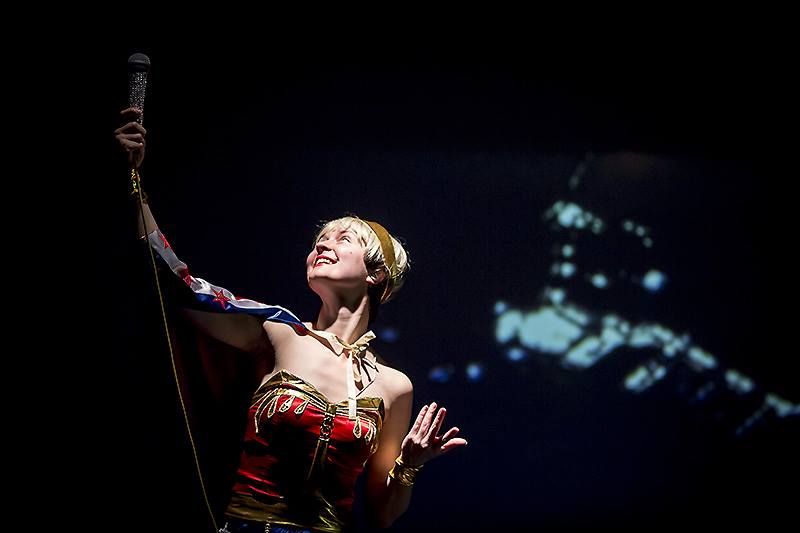 The atmosphere is, as well as the message of the piece, rather dark and gloomy, though the performance opens with an idyllic 1950’s song There she is, Miss America, which might lull you for a while. But our Miss America comes hunched, wrapped in a sweat shirt, from the microphone she holds close to her mouths you hear a male voice…You start to feel anxious and stay like this until the end of the piece. In a moment, you identify with the person on stage and share everything with her, as if the things were happening to you.

She slams, tells some wisdoms, burns up the audience with her eyes, she becomes a merciless, almost masculine creature. Many times, you must listen too carefully to be able to follow the flow of her ideas. In the vocal passages she shows her more lyrical face and supports her voice with originally stylised rap movements. They are sharp at times, or become soft, almost fluid. Her dancing partner is the microphone she never puts away. The performer deals with American over-confidence, she ridicules artists who would do anything to become famous. “Fake it till you make it,” raps the blonde-wigged coquette and plays her mimic expressions. But in the moments of most personal and intimate confessions, other means of expression are completely supressed. She sits motionless in her seat, on the darkened stage, or she speaks lying on the floor.

Who is Miss America? At its end, the piece refers back to its beginning. Instead of typical American beauties from the vintage music video, we can see pictures of ordinary women and men of different ethnicities who boast the Miss sash and dream about fulfilling their hopes. Mckenzie Tomski in the costume of the American superheroine Wonder Woman confidently steps on stage and poses triumphantly like a new-age Statue of Liberty. We can only hope her dream has really come through and is not just an illusion.

Though Miss America is a probe into the lives of artists, strangers in New York, it also addresses those who have new been to the Big Apple and never will. Hectic times, striving for success, performance requirements, hypocrisy, alienation, and loneliness are universal issues that concern anybody, anywhere. Miřenka Čechová brilliantly grasped the genre that is dominated by men and she surprised us again. 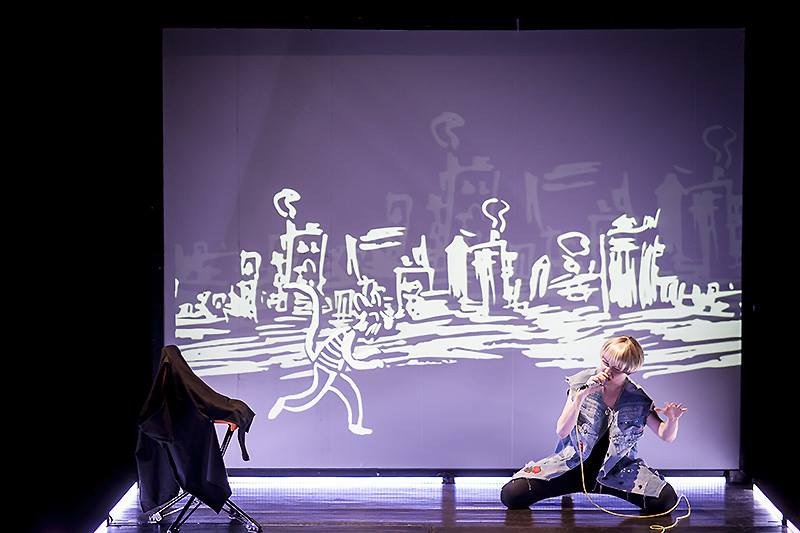 Written from the performance held on 9 May 2018, Palace Akropolis.