The Ostrava ballet company’s dramaturgs are always seeking and inviting interesting foreign dancemakers. For the company's autumn première, they have decided to collaborate with the Italian choreographer Mauro Bigonzetti and the Spanish creator Juanjo Arqués.

The programme opened with Arqués‘s choreography Consequence (Následky), originally created for the Dutch National Ballet in 2012. In this ballet, Arqués tackles the issue of humans' relationship to nature, with one of the central inspirations being the catastrophic tsunami in Asia. The 15-minute piece for ten dancers is most of all an abstract work where the vital role is played by the movement structure itself. Moreover, we cannot but compare it to Kylián’s East Shadow which works explicitly with the theme of a deadly wave and does not avoid strong emotions.

Juanjo Arqués uses plenty of floorwork, but almost no jumps, and he emphasises the plasticity of the torso and arms. For some steps, he obviously took inspiration from the hip-hop technique (especially electric boogie), in one part he lets the female dancers go on pointe. In partner dance, the search for new moves seems more successful, though at times the duets are little inventive. The feeling of timelessness and lack of strong emotions is underlined by the incoherent music collage including compositions by Alva Noto, Ryuichi Sakamoto and Jóhann Jóhannsson. We could hear electronic music, rustle and noise, as well as a string quartet playing live on stage in the middle part of the ballet – the musicians were sitting in each of the four corners of the stage, encircling the dancers like in an imaginary arena.

The minimalist visual design of the production (only black, grey and white colours being present on stage) echoed in the projection of lines of force onto the upper part of the horizon. These possibly referred to a peaceful seismograph or the vibrations of strings that could often be heard in the music accompaniment. The recurring manipulation with a light ramp became a strong kinetic element which allowed of creating interesting lighting effects. 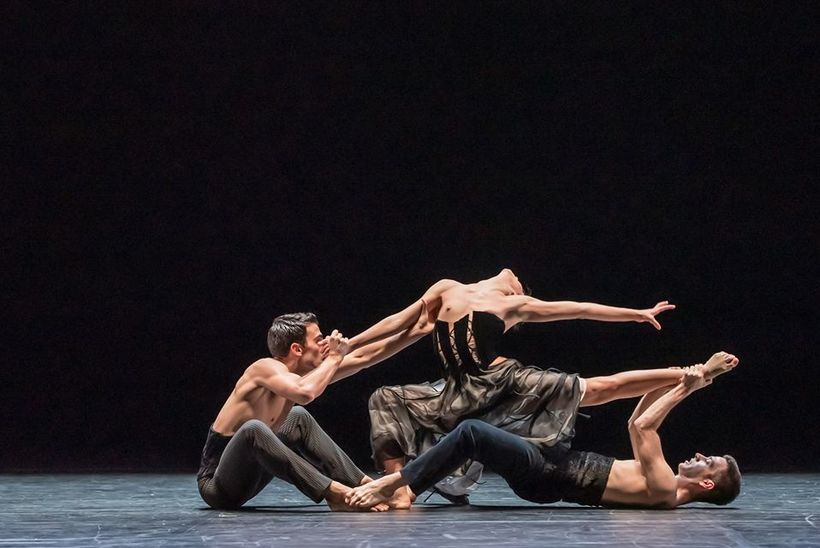 The main part of the bill, Rossini Cards (Rossiniho karty) - world première at Aterballetto in 2004 - was choreographed by the Italian Mauro Bigonzetti who is not unknown to Czech ballet-goers. He has captivated the audiences of Prague’s National Theatre by his duet Vertigo and recently presented his full-length ballet Kafka: Proces (Kafka: The Trial). To a colourful collage of Rossini’s compositions, in which pre-recorded big-scale symphonic and opera opuses alternate with subtle live-produced piano solos, Bigonzetti takes out the dance numbers like cards. The whole piece is framed by a joke (a killing joke, in fact). In the opening scene, all dancers, dressed in uniform oversized black jackets and trousers, are standing downstage. One of them takes off all his (or her) clothes and jumps into the orchestra pit. In the finale, the rest of the dancers jump too, one by one, pulling out various faces and grimaces. In between these two moments, a diverse series of dance numbers unfolds - diverse like the copious feast the dancers join at the beginning of the ballet.

Bigonzetti’s original choreographic style shows especially in solos, duets and trios. One of the most appealing moments was the first close-contact and intimate duet, in which a male and a female dancer twist and bend together in difficult positions. It looked more like some sort of power acrobatics. In order to transmit the suspense stemming from all of the slowness, stillness and flow, the duet requires outstanding artists. The second cast – Sawa Shirutsaki and Barnaby James Packham managed to cope with it very well, but the first cast Rita Pires and Koki Nishioka gave an even better performance. Another amusing scene was a trio, in which a female dancer with strangely contorted limbs (the gorgeous Barbora Šulcová) was carried on stage by two male dancers and she had to entangle her twisted body first to dance her solo. Into the series of varied dance numbers was inserted an acting scene which took place in front of the curtain – mixing Italian and a couple of Czech words, the performer dictated a recipe for macaroni alla Rossini. Chapeau bas to Rita Pires who could handle such a challenge! The very last duet was introduced by two dancers having an opera conversation – the louder it got the more out of tune it seemed. Except for Rei Masatomi whose barytone sounded great without caricaturing the imperfections. Rossini Cards is a funny and exuberant dance theatre kaleidoscope that offers interesting choreography and great dance opportunities that allow the Ostrava ballet dancers to display their artistry. Unlike the opening choreography Consequence, Bigonzetti’s Rossini Cards is a mature and audience-friendly piece that pushes the Ostrava company forward.

Written from the performance held on 23 and 24 November 2019, in Jiří Myron Theatre, Ostrava. 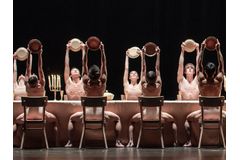 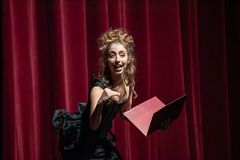 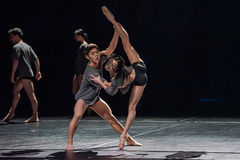