Prague Chambre Ballet is keeping in touch with its audiences through online media. On Mall.tv, it presents brand-new productions alongside revived works by the company’s founder, Pavel Šmok (1927-2016). PCB is using the time of forced separation from live audiences to consolidate and realise its position on the Czech dance scene. The presented works build on a tradition closely connected with Czech composers and choreographers. For a long time, Prague Chambre Ballet has been looking for ways to maintain and develop Šmok’s legacy. Getting its second wind with the premiere of Petr Zuska’s A Bouquet of Czech Folktales (2019), the ensemble did not miss the chance to defend its existence by premiering new pieces as well as going back to the roots. Seeking an anchor in the current unstable situation, PCB decided to focus on high performance quality and promotion of Czech artists whose themes and working methods are not likely to spark a revolt against everyone and everything.

On the contrary, the process of returning to the depths of the human soul has been smooth and peaceful. Musicality and visualisation of music in narration and abstraction is a motto PCB clings to, along with humour (rather black one) which remains at the heart of numerous works in the company’s repertory. Some productions are available to watch online until mid-March, including the choreographies recorded in December 2020 in the Na Vinohradech Theatre. The forced pause thus bore some fruit – for instance full concentration on the recording and reviving of two choreographies by Pavel Šmok (https://www.mall.tv/kulturazije/prazsky-komorni-balet-holoubek-a-musica-slovaca-12-2-2 ).

The first one is Holoubek (The Wild Dove, 1992) one of the four orchestral poems based on K. J. Erben’s opus A Bouquet of Czech Folktales. The composition resonated with Šmok’s creative nature and his intention to translate the music, inspired by the rhythm of Erben’s verses, into dance. The choreographer worked with the four big sections of the symphonic poem (funeral march, widow meets a virgin boy, wedding festivities and tragic ending) and provided an important counterpoint to the ballad atmosphere by setting the story of the woman/widow in the carnival period. At the beginning, we can watch her acts in retrospect - she poisoned her husband who died in pain. The musical accents and seriousness of the moment are expressed by simple moves, such as standing up quickly from a chair, as there is no need for big gestures and variations packed with steps. 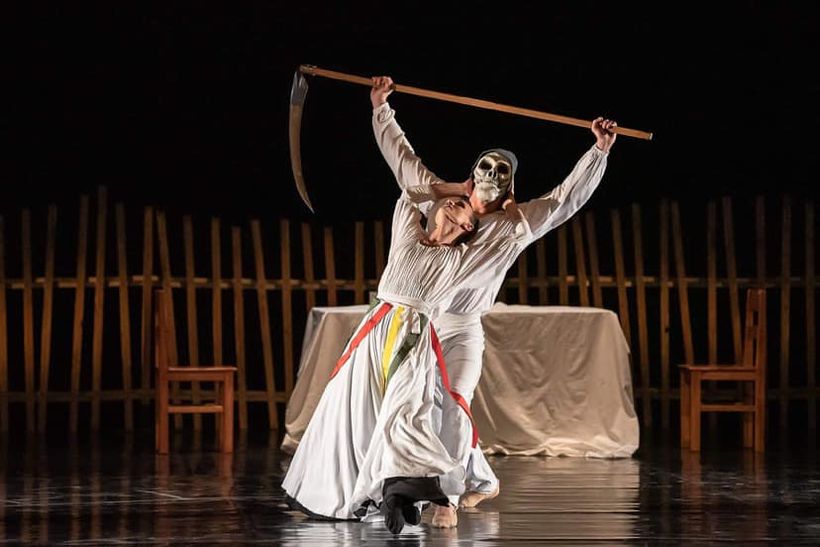 A whirl of masks bursts onto the stage, a dancer on pointe shoes among them – a wild dove wearing the mask of a death-head. However, their careless swirling is just an illusion. In the music and the picture of a widow sitting at a table next to a dead-pale man whom she killed, we can feel an ominous sign – the feelings of guilt that poison the murderess’s mind and which are embodied by a dark figure with a scythe and the wild dove. The dove’s actions are accompanied by sorrowful cooing – the sound of two flutes, a harp and an oboe – which keeps the sinner up at night. The “curse-motif” is present in the music and dance alike, not only in serious moments, but also during wedding festivities.

The choreography serves the narration and the music, it helps intensify the overall message and figurative meaning of the symphonic poem. Besides challenging duets of the widow and her men, induced with sensuality, insistence, burning sexual desire and longing for peace and forgiveness, another important aspect is attention to detail; such as the woman stroking the blade of the scythe or sensual touch between the newly-weds consumed by mutual attraction. Šmok did not gravitate towards excessive movement, he worked with curves as well as angled lines, with straightforward gestures and poses expressing the characters’ internal struggle. The scene in which the heroine falls into a waving fabric, is Šmok’s attempt at the same catharsis full of reconciliation and atonement that can be found in Dvořák’s music.

In The Wild Dove, a compact and well-structured piece, Dvořák’s composition mastery as well as Šmok’s choreographic art reached their pinnacles. The choreographer’s vision is reflected in the stage design as well - the space is defined by a fence and a table with a white cloth, a cup, and a single chair on each side. The simplicity of the costumes (simple cut of the woman’s dress and the men’s trousers and shirts) matches the modest scenery. During the wedding scene, the all-white attires are livened up by yellow, blue and red ribbons fluttering among the masks as the symbol of joy. The dancers playing maskers wear loose clothes and soft-coloured headpieces of various shapes. 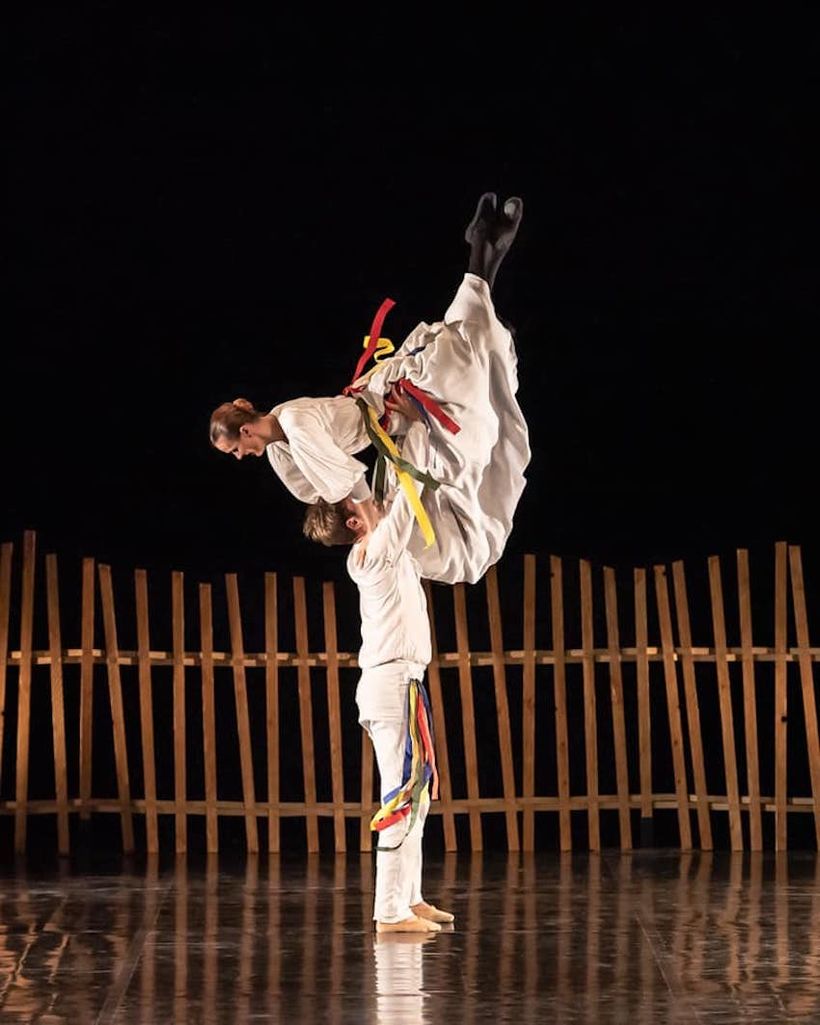 Since The Wild Dove is only 20 minutes long, it needs perceptive and focused performers. The current cast seems to be the perfect choice. Linda Svidró has been rehearsing under the supervision of Kateřina Dedková-Franková, and as the murderous widow experiencing love, hate and remorse, she demonstrated mature stage presence and confident dance technique. She expressed the pain and passion with her whole body, her gaze, and even her face or the way she touched her partner. Linda Svidró did not pretend to be a misfortunate woman, she really became her…Other members of the cast looked equally confident on stage. Aleš Krátký as the Man/Corpse, without paying too much attention to dance technique, inadvertently tells us about his irreversible death. Dominik Vodička represents youthful force and carelessness as he easily falls for the seductive woman and enjoys carnal pleasure. Iveta Krmelová is the only one who dances on pointe, which makes her stand out of the carnival crowd. She plays the dove, a metaphor of the murderess's bad conscience. All the aforementioned dancers helped to create a powerful theatrical experience. The recording also benefited from sensitive and professional camera work and direction.

Šmok’s musicality also shows in the 7-minute ballet Musica Slovaca (premiere 1983). Ilja Zeljenka (1932-2007), author of the libretto, was inspired by two harvest songs from Čičmany and Dolný Vadičov. Like the previous choreography, this frolicky, yet tender duet incorporates many folk dance features (arms, footwork) which naturally became part of the dance language, encouraged by the melody and feelings generated by the music. 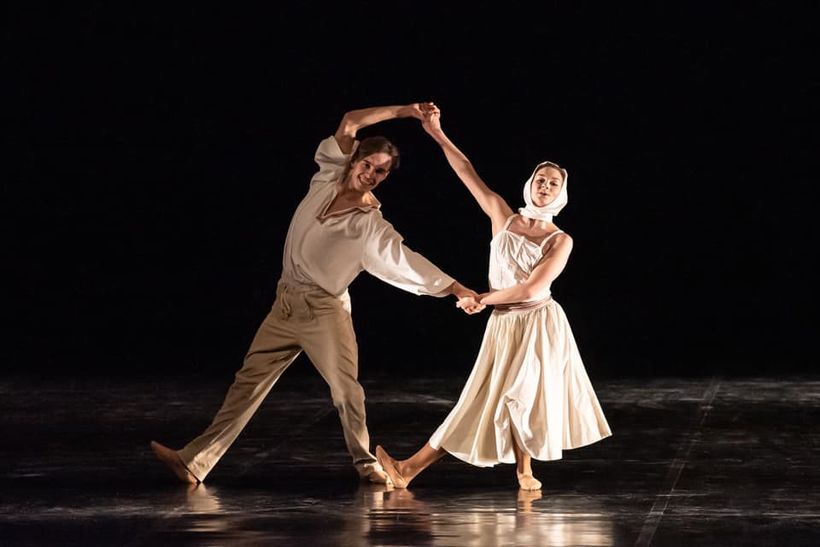 The young guest dancer Oldřiška Neumannová feels the music and delves into the choreographic stream along with Dalibor Lekeš. They both softly slide on the ground, handle partnership technique in low positions, without slipping out of their roles. They express unspeakable emotions through dance. Capturing tenderness, kindness and playfulness, they caress and flirt through their movement. The simple costumes (the girl wearing a head scarf, the boy sporting loose trousers and a shirt) refer to Šmok’s main inspiration – folklore. Šmok never forgot this aspect in his work, and he was aware of the fact that folklore was an added value which helped bring out the uniqueness of his creations. Luckily, Prague Chambre Ballet seems to stick to these qualities as it revisits valuable pieces that defined modern Czech dance history.

Written from the recorded performance, available on Mall.tv until 14 March 2021.