Only a week before the Czech culture sector was forced to close under the country’s second lockdown, Johana Pocková and Sabina Bočková (aka PocketArt) premiered their long-awaited new creation. Last year, their original work Jáma lvová impressed audience and critics alike, as it was the first piece after a long time in which Czech contemporary dance addressed the issue of engaged social criticism solely through original dance and movement expression. In a flood of cross-over projects and multi-genre creative approaches, it felt like a breath of fresh air. The recent premiere made it clear that the creative tandem remains viable. The creators have not abandoned their characteristic style based on the rhythmisation of movement expression and imaginative sharing of individual impressions – a typical example of one of the possible forms of contemporary dance in central Europe, East of Eden in the parallel universe of the German tanztheatre.

This approach can possibly help Czech contemporary dance step outside its own shadow of the second half of the 20th century. Back then, the strongly supported importation of American modern dance techniques overran the functional principles of Jarmila Kroschlová’s newly formed methodical approaches and helped marginalise Jarmila Jařábková’s Czech duncanism. It was also the reason why the Czech society was so ignorant of innovative dance schools and systems, such as Laban and Hellerau-Laxenburg. It is a different story, though until recently (literally a couple of years ago) it was a big taboo in the Czech environment and a slightly malign issue for the Czech dance scene.

It might resemble the situation in some Eastern countries, where the issue of ecological catastrophes was regionally tabooed and globally ignored. Environmental disasters also served as an inspiration for the Treatment of Remembering whose authors invited for collaboration the dancer Inga Zotova-Mikshina. 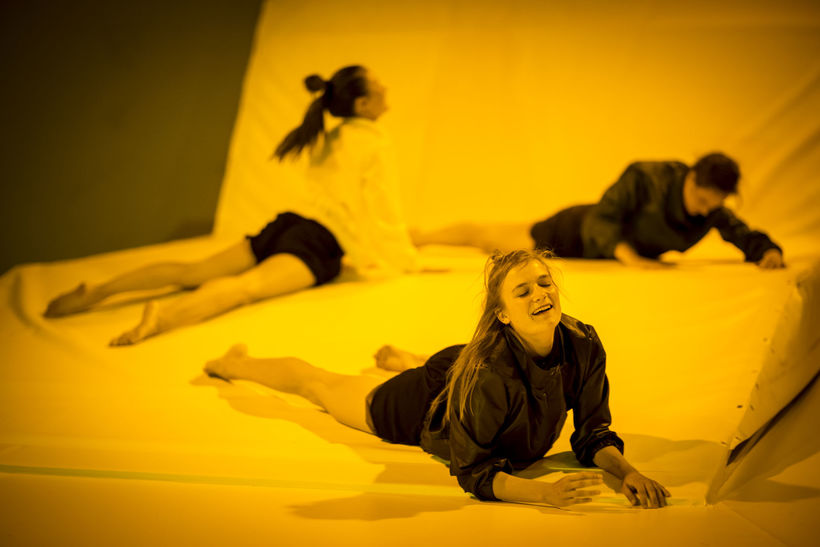 Apocalyptical time and a landscape that cannot even be called this name. It is not the ashes from which the mythic Phoenix arises, it is a time-bleached void. Remnants of the Plastic Age are the last place where Nature (as the indestructible sign of life on this planet) can seek its way to renewal. Its pulsating struggle for survival triggers the necessary process of an inner search for long-forgotten memories that should act as the navigating factor for creating a new world. Unless the information has been changed in the genetic code (according to the latest recoded experience). This could prevent the completion of the restart.

Treatment of Remembering does not take the path of engaged and shouting provocation, it rather makes us think, which corresponds with its meditative flow and movement minimalism depicting the process of forgetting and contrasting sharply with the rhythmical expressivity demonstrating the power and importance of selected memories.

The expressions of the three fine-featured dancers evoke an almost poetic atmosphere of an idyllic picture of fulfilled dream visions, which are soon disturbed and transformed, depending on the understanding of “no return”. Imaginations are not descriptive, but they are not abstract either, their expression is determined by the dynamics of the performance. They take more concrete shapes thanks to the spoken word which eventually deepens the work’s catharsis and thus intensifies the emotional aftermath of the stage action, for both the performers and the audience. 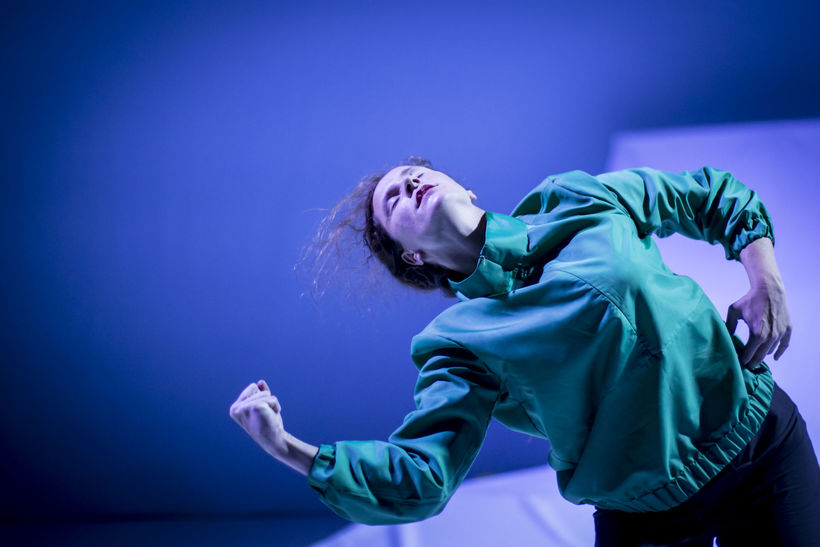 The impression from the performance would not be complete without Denisa Švachová’s scenography which is object-linear. It accentuates the movements and expressions of the dancers but also reveals the unnecessary drama of colours in the otherwise uncomplicated light design. Today’s trend of LEDs should make it easy to prepare softer, earthy colour tones. Fortunately, Lukáš Palán’s music in Jakub Šťourač’s sound design feels like a sensitive minimal and supports the complexity of the work.

And then there is Inga Zotova-Mikshina whose presence endows the performance with a strange (maybe a bit freezing) meaning. This, however, may only be comprehensible to those who are familiar with Petr Boháč’s creation Konec člověka?!? Reportáže psané z kuchyně, in which Inga Zotova-Mikshina plays a Russian TV presenter who describes the consequences of the Czernobyl catastrophe with a Russian accent and self-ironic detachment. Be it intentional or not, it gives you goosebumps anyway.

The motto of Treatment of Remembering reads: “Imagine that you are breathing.“ We must hope that breathing will not become something to imagine. Without words, PocketArt turns our attention to the fact that we need to be alert. Otherwise one day we might get stuck in the deadly mud of dark red radioactive sludge. And it will burn all memories of every DNA, every doe, and every human. That is what a virus cannot do.

Written from the premiere held on 5 October 2020, at the Ponec Theatre.

Original version of this text in Czech was published on 20 October.