Three premieres, collaboration with musicians and SKUTR duo, six months in Berlin and 10th anniversary celebrations ahead of Cirk La Putyka this year Last 21 December marked the 10th anniversary of the premiere of La Putyka, directed by Rostislav Novák Jnr. This September, it will be 10 years since the foundation of Cirk La Putyka ensemble. 2019 will witness the celebrations of this anniversary and some special events added to the “regular” programme. In February, the company will premiere its new show Isole directed by Maksim Komaro, with music and musicians playing the lead. Later that month, one part of the company will leave for a half-year residence in Berlin’s cabaret Chamäleon Theatre, where it is to perform almost one hundred and eighty runs of the newest creation Memories of Fools, tailored especially to fit the venue. Autumn celebrations include, for instance, the presentation of the project Sancho Panza, for which Rosťa Novák has been joined by the directing tandem SKUTR, revivals of some of the company’s early works (performed in places of their creation) and premiere of a Czech Television documentary on the Novák family. A pompous new circus show at Forum Karlín is also under negotiation. For the spring 2019, the company is planning nation-wide cinema relays of last December’s Up End Down Symphony.

“Retrospect is important, sure, but it’s also vital to see the future. We don’t want to take the well beaten track, with each new project we want to explore the possibilities of contemporary theatre and new circus and push the boundaries of our art and other genres. With each new project, we face new challenges,” says the company’s Principal, Rostislav Novák Jnr, about the 10th anniversary.
The first premiere of 2019, Isole, will be held on 11 February 2019 in a theatre space Uffo in Trutnov. It is directed by Maksim Komaro, the head of the Finnish company Circo Aereo, who has already created three pieces for La Putyka. In Isole, the creators focus on live music that has accompanied La Putyka’s shows since the very beginning. Instead of acrobats, musicians take the lead and the performance leans more on live music and less on dance and physical theatre. “Which element we haven’t used to its fullest during the company’s existence? Our musicians are not just players, they often take part in choreographies and acting scenes. That’s why we’d like to give them more space. Isole should be something like ‘sound’ new circus show,” explains Rosťa Novák Jnr. “It’ll feel like seeing acrobats flying in the air but in fact you’ll be watching musicians crossing boundaries between a concert, theatre and circus.”
The title Isole comes from the Italian word meaning ‘an island’. More broadly, it refers to the poem No Man Is an Island by John Donne that served as inspiration to Maksim Komaro. The author of the music score is the composer, multi-instrumentalist, and performer Jan Balcar.
Concurrently, another new production Memories of Fools is in rehearsal. The premiere will take place on 4 February in Berlin’s Chamäleon Theatre. The show featuring six permanent company members, one local and two international guest artists will be performed one hundred and eighty times, including pre-premieres, in just six months. Cirk La Putyka returns to the unique space of the Berlin cabaret (meals and drinks are served during performances), where it presented Roots two years ago. “The piece is subtitled ‘We are all freaks because the time is freaky’ and explores our oldest and deepest memories,” says its author and director Rosťa Novák Jnr. In September, Memories of Fools will move back to Jatka78.
The peak of the 10th anniversary celebrations will come in autumn 2019. Within the project Sancho Panza, opening on 1 October at Jatka78, former DAMU classmates and colleagues from Archa Theatre - Rosťa Novák, directing duo SKUTR and founder of the company, Jiří Kohout - will reunite after ten years. “Apart from personal memories and experiences, the project is inspired by the novel Don Quixote de la Mancha. A man in his forties looking back on his life. A man who feels that he can still do what he did in his twenties but eventually finds out that some things are beyond his powers. A man who still has dreams, he doesn’t not wait and decides to make them come true. It’s a piece oscillating between spoken word, movement, metaphor of matter and music,” explains Rosťa Novák Jnr.
In October and November 2019, Cirk La Putyka’s complete repertory is to be seen at Jatka78 and two historically first productions will be shown at venues where they premiered: La Putyka at Archa Theatre and Up End Down at La Fabrika. The highlight of the celebrations is being negotiated to take place at the end of November: two original new circus shows at Forum Karlín. “The concept is still in progress, but we want to invite most of the artists we’ve collaborated with – including international guests,” notes Rosťa Novák Jnr.
Cirk La Putyka will celebrate on stage but also on the silver screen – cinemas in the Czech and Slovak Republics and in Poland will screen the performance of Up End Down Symphony (with live music by the Film Philharmonic) from last December. On 7 November, a documentary of the Czech Television Na krev, mapping five years in the life of the Novák family and Cirk La Putyka, will open at Jatka78. “We’re also considering publishing a book on our anniversary,” concludes Rosťa Novák Jnr.
Besides the above-mentioned projects, Cirk La Putyka will perform throughout the year in their home space Jatka78 and participate in local and foreign festivals with their shows La Putyka, Up End Down, Slapstick Sonata, Airground, Batacchio (big Czech tour), Honey, ADHD (at the prestigious Biennale Internationale des Arts du Cirque in Marseille), Black Black Woods or Biograph. At Jatka78 only, the company will give one hundred shows. In addition, the company members organise new circus and movement workshops for children, youth, and seniors. 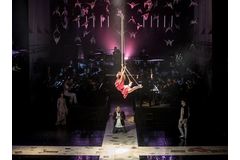