Ballet Gala: live but safe in the time of Corona

This March saw the closure of all theatres because of the COVID-19 pandemic but muses do not remain silent – world-class ballet companies go virtual and for a limited period of time, they release live recordings of their productions.  Dance lovers can thus revisit their favourite pieces or enjoy titles they have been missing so far. The Czech National Ballet has come up with a unique event. On 12 April 2020, the TV channel Czech Television Art broadcast live a benefit Ballet Gala in prime time hours. The host of the gala night, member of the National Theatre’s Drama ensemble Radúz Mácha, ushered us into the inside of our leading theatre house. Followed by cameras, dancers performed in front of an empty auditorium, wearing masks which have become part of our theatre and day-to-day experience. The members of the Czech National Ballet are living through tough times but they have decided to stay active. The National Theatre’s FB page features online ballet trainings, and previously offered a compilation of videos showing the dancers’ home practice – a spot entitled Dance Through It opened a series of videos going behind the scenes of the Czech National Ballet during the government-imposed state of emergency.

The preparation of the gala programme was, without doubt, another test for the company. It proved the dancers’ perseverance as they united under the current circumstances and gave convincing performances. They had to rehearse under strict sanitary conditions – it meant a minimal number of people in the studio, or testing face mask material to see if it was suitable to dance with on the stage. To cover their faces, they chose nanotextile masks and so the company could proceed to selecting choreographies for the unique event.

Its dramaturge, the artistic director of the Czech National Ballet Filip Barankiewicz, had to take into consideration the fact that there could be no more than two dancers on the stage - either live partners or those living together in one household who decided to voluntarily participate in the event. The result was an hour-long programme made up of eight short dance numbers – most of them had appeared as part of the Velvet Ballet Gala (November 2019) and some of them feature in the company’s season repertory. During the live session, the artistic director spoke in Czech (not English as he had done before) which I see as a good sign for the stabilization of the company which has expressed its disapproval with the director’s approach. 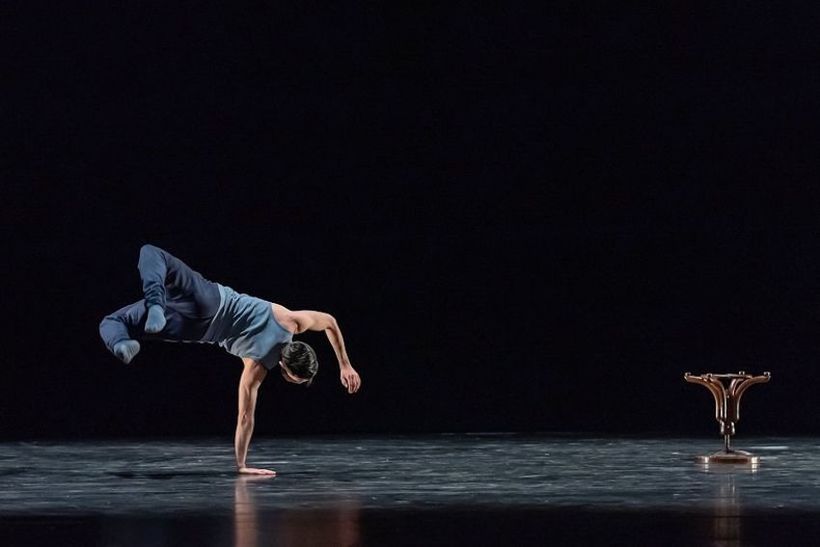 The soirée opened with Just Solo set to the song People Get Ready (by Seal), choreographed by Viktor Konvalinka and performed by Mathias Deneux. This slender French dancer has been dancing with the company for ten seasons and has presented his physical and dramatic talent in numerous roles – those who follow his career would agree that the most memorable appearances include Mercutio in Petr Zuska’s Romeo and Juliet, in which Deneux demonstrates his outstanding stage presence and detailed portrayal of the character.  Though in Just Solo his face was partially covered, his flexibility, his accurate gestures and changes in posture underlined the movement impulses and shapes of this dance lamentation. It was the professional confidence and the added value of deep inner experience that united all the presented works, created in the spirit of the 21th century neoclassicism which absorbs new impulses disturbing the polished lines of classical ballet.

More serious topics alternated with lighter, humorous pieces, such as a duet from the ballet Rain by Moldavia’s Radu Poklitaru (it was set to a Moldavian folksong), three male solos Paco, Pepe and Pluto by Alejandro Cerrudo, and Ballet 101 by Eric Gauthier. These short pieces, particularly Paco, Pepe and Pluto, required the dancers to shake off their shyness (as they appeared on the stage wearing nothing but nude ballet belts) but also to show high level of technicality and sense of self-irony in this celebration of naked male musculature and physical capacities (this piece set to the songs The Chapel in the Moonlight, That’s Amore, Memories Are Made of This premiered in the National Theatre in November 2019 as part of the Velvet Ballet Gala, and is to be included in the mixed bill Phoenix in November 2020). Roger Cuadrado, Jakub Rašek and Giacomo De Leidi masterfully executed their variations, with attention to detail and enthusiasm that even face masks could not diminish. Giovanni Rotolo also excelled in Julien Guerin’s solo choreography Dear Soaring Thoughts set to Pablo Casal’s Song of the Birds performed live by Martin Levický (piano) and Petr Nouzovský (violoncello). 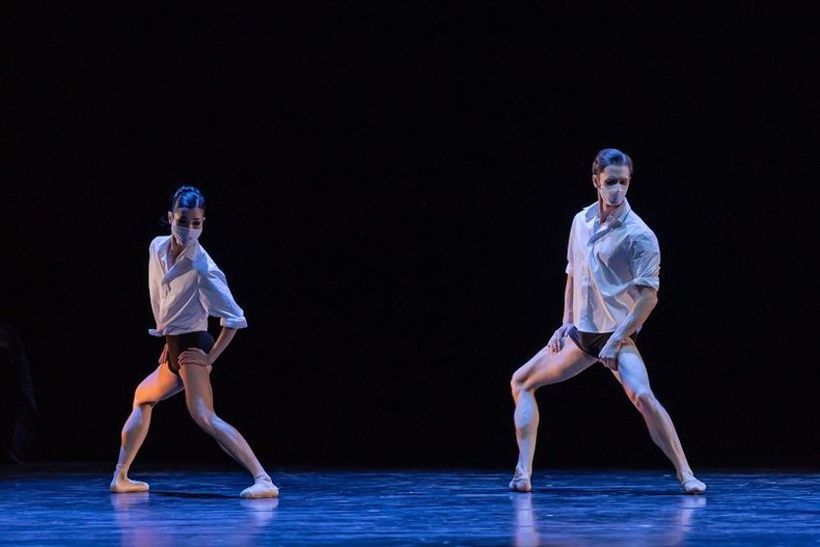 The magic of the moment worked perfectly in the duet Vertigo by Mauro Bigonzetti (music by Dmitry Shostakovich), danced by Adam Zvonař and Radka Zvonařová. The Kylian-like transitions in space and the lighting, the smooth movement evoking unearthly beauty captured in a subtle, fluid dance stream touched me even through the screen. The ballerina nestles in her partners’ arms only to break free a second later and fly in the air – clad in a black bustier and black panties, she lays herself bare on stage. She is fragile, vulnerable and determined to impose her will. Same as  the man – he is the one who supports and the one who causes pain. Watching this couple was a special experience –  their absolute commitment gave the impression of the two bodies merging with the space and time, as if unawares, without heavy breathing or too much effort. Brilliant!

Robert Bondare‘s Take Me With You accentuates the contrast between slow and fast pace of a movement phrase. Clapping, body drumming or finger snapping completes the music score which set the rhythm for dance pulsation, off-axis steps and Aya Watanabe stabbing her point shoes into the dance floor. She performed the Forsythian choreography alongside Patrik Holeček, with vehemence and attention to detail.

The final solo Ballet 1010 by Eric Gauthier is set to a row of numbers recited in a voice-over, each of them referring to a concrete dance position or pose. Federico Ievoli proved his readiness and ability to react swiftly to the numbers, called randomly in the second half of the solo – this challenging choreography requires sharpened receptors and perfect coordination.

The ballet gala livestreamed in the time of COVID-19 showed the top level and perfect shape of the Czech National Ballet dancers who are bravely facing the current crisis and perform impeccably in front of TV cameras.

Written from the Ballet Gala televised live on the Czech Television Art on 12 April 2020.

Benefit Ballet Gala – Dance Through It