The Letní Letná festival has taken root on the plain in Prague for nineteen years of its existence. It is associated with a pleasant and action-like atmosphere that enriches the city while the holidays slowly disappear. After two years of restrictions, it seems to be a free zone of creativity and circus arts, where everybody can choose from the rich offer of their taste and current mood. One of the highlights and attractive draws of the program is Cirkus Cirkör from Sweden, which returned to Prague with the yarn after nine long years. The company presented Knitting Peace in Prague in 2013, although the foreshadowing took place one year earlier as part of their common project of the Lacrimae cabaret. The three participating companies Cirk La Putyka, Cirkus Cirkör, and Cahin-Caha with their managers (Rostislav Novák Jr., Tilde Björfors, and Daniel Gulko) participated in the production of the unique series of presentations. The memories of the then performance are associated with cool shades, wool and yarn, acrobatics in ropes, and the feeling of melancholia, although the sound of captivating violin could be heard from the stage. The current performance thematically resonates with the world in war today which is referred to by many symbolical gestures, knotted and unraveled yarn, as well as manipulation with knitted figures.

It is a visually attractive and poetically fragile work interwoven with excellent acrobatics. The parts of the production support each other as if they were weaving a compact tapestry about hope. Each acrobat had the opportunity to stand out individually and in a group in several disciplines in about eighty minutes. The range of skills included balance on bars placed on a suspension platform (Aino Ihanainen) and a huge ball with a handstand in pairs choreography. The space high above the ground was used much more frequently because the sophisticated suspension system on a mobile swivel employed a net with a horizontal bar (Tiziana Prota), and ropes (Nathalie Bertholio stood out with a cyr wheel as well), the balls with a hole for a person or a tied ladder. One of the triumphs of the evening was tightrope walking. Although the performers seemed to be a well-coordinated team and they radiated deep reciprocity, the stage was gradually dominated by Alexander Weibel Weibel. He surprised and stunned the audience. Not only did he demonstrate many ways of walking on a slack and tight rope, but he also succeeded in other unbelievable tricks, such as a handstand or moving on a one-wheel with his arms while playing the violin. The music and motion virtuoso managed to get in immediate touch with the audience, shared his worries and growing suspense, then a relaxed joy from a successful piece. His performances framed the whole and individual chapters, some of them escalated so much that they induced the feeling of a grandiose finale and the hall applauded wildly. 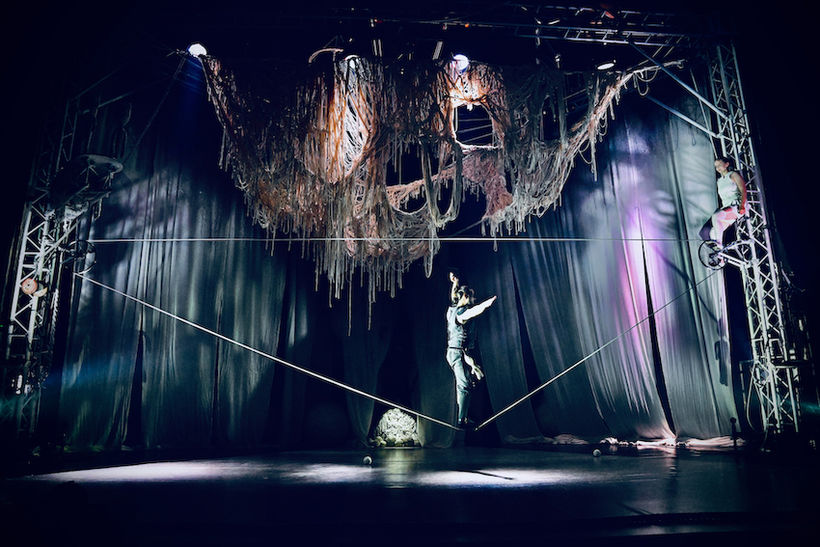 The balance of the shades at all levels – from the thinnest thread to costumes and dense nets to light design with smoke – induced a fanciful world far from reality, while many motives mirrored the desire for unity and support: the real appeal of this time. Original moments were created by connecting the selected material, atypical stage objects, and human cooperation. For instance, the handknitting of a net over the heads of acrobats huddled in a cage reminded me of a prison bar drop. However, I felt the strongest desire for freedom from the acrobat in a red dress and heavy black shoes (Tiziana Prota), who was climbing on a ladder reinforced on the sides by ropes that were unraveled and the rungs were falling on the floor. The stage was dominated by live string music mixed with electronic music and the voice of Samuel „LoopTok“ Andersson. He accompanied the show from the central stationary point located above the stage. He was frequently joined by acrobats skilled in music.

Knitting Peace at this year’s Letní Letná is a great family performance that fulfills the expectations and offers demanding circus tricks, yet does not ignore the contents and polished visuals. The international cast – the show features acrobats from Italy, Norway, Finland, France, and Spain – is a credit to the biggest Swedish circus in Prague.

Written at the Letní Letná festival that takes place in Prague from 11 to 31 August 2022.