When the first wave of the Covid-19 pandemic hit Europe in March 2020, the South Bohemian Theatre ballet company was busy rehearsing Petr Zuska and Štěpán Benyovsky’s new ballet Radio Free Cunning Little Vixen. Though the unprecedented circumstances and the subsequent lockdown made it impossible to premiere the piece, the creators persisted and prepared an online streaming of the performance during the Christmas period. The duo of authors opted for a literary theme, more precisely a well-known lyrical fable The Cunning Little Vixen by the Czech author and journalist Rudolf Těsnohlídek. To a large extent, they stayed faithful to the original tale and retold the story of the untameable vixen by means of dance. We can thus follow the forester Bartoš who tries to adapt a vixen cub to become a perfect pet for his son Pepík. However, driven by her wild instincts, the leading animal character keeps getting into mischief and eventually runs off to the forest where she lives many adventures with her fellow forest creatures. The title of the new ballet makes reference to the radio station Radio Free Europe, underlining the theme of freedom which, according to the choreographer, is a key element of the story. To evoke an authentic radio experience, the piece is set in a recording studio during a radio broadcast session.

The word “retell” which I use above seems apt for the piece, since Petr Zuska worked with an illustrative, mime-like choreographic language. This interpretative style can be spotted in his previous works as well, for example Sólo pro nás dva (Solo for the Two of Us), Zuska’s last creation before he retired as the artistic director of the National Theatre Ballet. In both cases, the choice of sound is vital –  Radio Free Cunning Little Vixen features an early 1960’s radio recording of Těsnohlídek’s fable, narrated by Karel Höger.  Almost every gesture and every step in Zuska’s choreography corresponds with the voice-over, except the scenes which are set to a collage of instrumental compositions and show off Zuska’s choreographic talent – such as the Vixen and Lapák the dog quarrelling to the sounds of Mozart’s A Little Night Music. Zuska’s musicality is indisputable and so his lively and dynamic choreography abounds with jumps and refined dance sequences closely tied to the music score.

Ayano Nagamori as the Vixen enjoyed the most dancing in the piece and Zuska’s style fit her like a glove. The acting, though (or shall we say overacting?) seemed a little odd. As if the emotional nuances on the imaginary scale between extreme joy and utter dispair did not exist. However, I assume that choreography-wise, these moments are the most valuable. 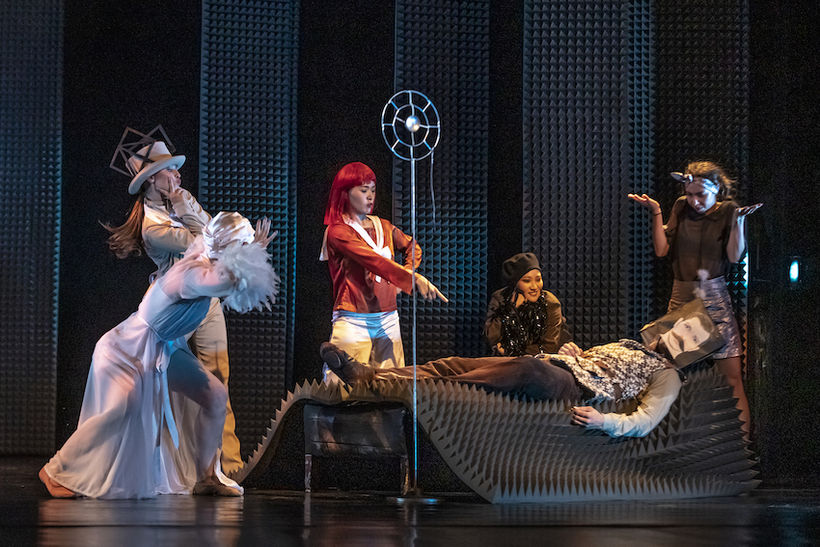 Jan Dušek‘s minimalist and highly functional stage design can surely be seen as one of the highlights of the production. Dušek used a few objects which could be altered and adjusted depending on a situation. The pure and simple sets made a good counterbalance to the descriptive choreography and the concrete narrative. The colourful costumes, even brighter against the dark sets, were created by Pavel Knolle. I genuinely admired the original and refined designs worn by Lapák and the green frog – abstract enough to tickle our imagination, but still based on real-life animal features (e.g. the colour). However, the attires of other forest animals bore strong resemblance to human clothing and implied various environments, for instance a girl wearing a cabaret costume or a young lady sporting a combination of a white nightgown, a matching turban and large sunglasses. Watching the piece, I was not able to figure out why these animals were different from the others. I also wondered at the enormous cubes the “human” characters wore on their heads. On each side of the cube was printed a human face or a top of a head. The audience thus missed the performers’ facial expressions and plasticity, which I see as a major downside to a theatre piece.

Petr Zuska and Štěpán Benyovsky’s creation is likely to appeal to a wide audience. The fairy tale story and playful staging seems like a perfect attraction for young spectators, while the 1960’s voice-over might be interesting for their parents, refreshing their childhood memories (though at times, the instrumental music interferes with the spoken word and makes it difficult to understand). The creators also included a bunch of “estrangement effects” which help engage adult audiences (I wonder, though, if children can ever grasp the meaning of some of these allusions). From this point of view,  Radio Free Cunning Little Vixen appears to be a smart move.

Written from the online premiere streamed on 26 December 2020, and from the performance recording published on Vimeo.

Ballet of the South Bohemian Theatre