The Sleeping Beauty Or How To (Not) Stage A Ballet

The ballet company in Ústí nad Labem has decided to take a risky step when it put The Sleeping Beauty in the repertoire. The ballet composed in the late 19th century as a celebration of the aristocratic splendor requires technically skilled dancers and a patient audience. Pyotr Ilyich Tchaikovsky’s music was originally arranged into three acts and a prologue, the ballet is dominated by group scenes, pas de deux, divertissements, and the original score numbers nearly four hours. The versions of the identical length referring to the 1890 Marius Petipa’s choreography have been staged in the opulent emballage by ballet companies in Paris Opera, Royal Opera in London or Bolshoi Theatre in Moscow. The Sleeping Beauty ranks among the pieces on which the dramaturg of big ensembles rely but even theatres with smaller companies include this piece in their repertoire as far as our region is concerned. Apart from the National Theatre in Prague, which currently stages the piece with Marcia Haydée’s choreography (you can read the review here), The Sleeping Beauty was also successfully performed in 2019 by the ballet company in České Budějovice with Jaroslav Slavický’s choreography (you can read the review here).

In České Budějovice, they invited guests to complete the company, which proved to be in a very good shape, while the ensemble in Ústí nad Labem featured five soloists and fifteen chorus dances with the help of the children studying at the preparatory school of the North Bohemian Theatre. This is a substantial handicap, which needed to be taken into account along with the necessary reduction of the music part. The stage was defined by wooden boards with carved rose ornaments animated by lights of multiple colors, which was a truly simplifying solution. There is a lot of luminescent abundance of bright pink, turquoise and yellow, the changes in color dazzle with brightness and variety and happily cross the limits of the kitsch at times, especially in combination with the costume colors. Everything glares, including Madame Catalabutte’s ginger wig and bright green jacket (replacing the eponymous master of ceremonies from the original cast with braids that represent a distinctive element in the scenes.

Madame Catalabutte is a clown and Linda Buňková enjoys mimic playfulness in the role. She entertains the children present at the masquerade organized in the honor of Aurora and releases colorful balloons the princess uses in the next act as presents for her suitors. It is hard to say when the story takes place, the parents of the main character are wearing rococo clothes, including white fluffy wigs; their kingdom is rather unpretentious with two yellow armchairs and a small coffee table that transforms into a vase after it is turned upside down. Aurora has a bright yellow dress from a firm and glossy fabric with ruffled pink sleeves that are not very flattering for the pretty ballerina Frederika Kvačáková, who plays the main role. She looks better in a red dress from light material illustrating the lines of the movement in a dreamy scene, and in the white dress in the finale. The authors obviously had to make many compromises in directing and choreography and tried to introduce lightness and wit. 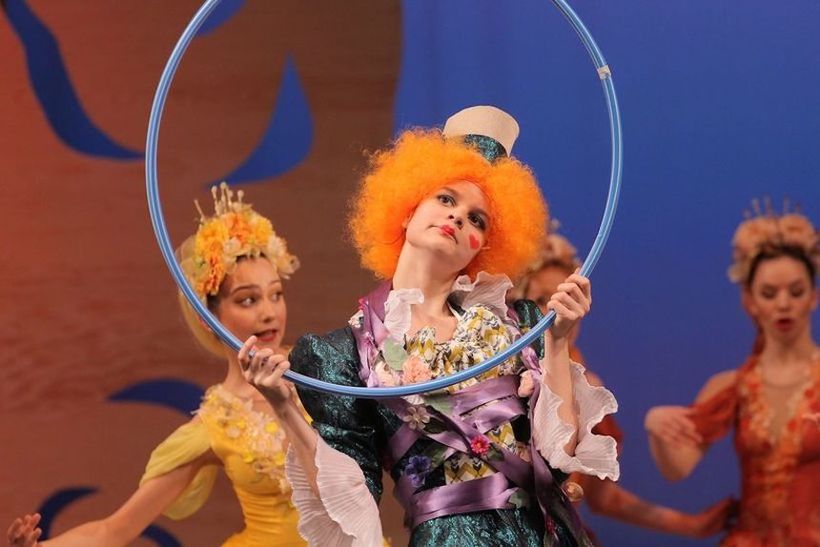 The fairies do not appear at the christening but the celebration of ten-year-old Aurora. They behave impishly: one of them has a lorgnette without which she is lost (like in Javier Torres’s The Sleeping Beauty at the National Theatre in Prague in 2015), two good fairies are Siamese twins separated by the spell of malevolent Carabosse aka choreographer Vladimír Gončarov, who is wearing a pointe shoe with red strass, which he sometimes stands on if he does not limp.

He and Margarita Plešková created feasible variations for women dancers. They were as forthcoming as possible, yet there were problems with an unsure pointe posture and a smooth performance of variations. It is clear that the newly created relations still represent a challenge for them and we can only hope that they will get more confident, gain plasticity, elaborate on the poses and positions and reduce their exaggerated facial expressions. While the women dancers employ the academic technique, the authors attempted to use more distinctive characterization linked to contemporary dance technique for four suitors Carabosse conjures from red hoods from which the four crazy men emerge to set off on a journey to the princess they clumsily court.

As well as the stage set and costumes, the dance composition features a mixture of styles that lack elegance though. The number of characters that need to be represented in the production is overwhelming for the chamber company and the group scene in the Waltz relies on three dancers only – the Gold Fairy, the Silver Fairy, and the Diamond Fairy, intertwining the ribbons with their partners. 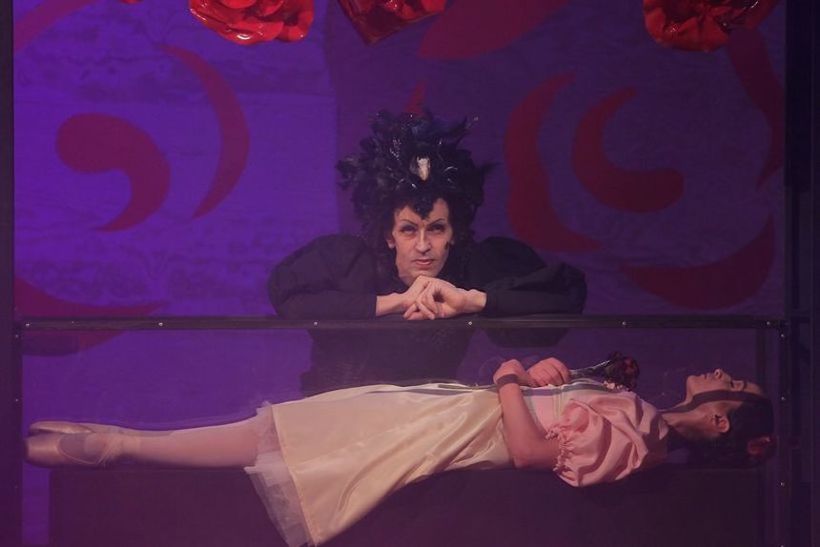 The world of evil is hidden behind a black screen with rose motives behind which the suitors/Carabosse’s servants put the princess in a transparent box. Before the girl is put to eternal sleep after she was pricked with a purple rose, they bring her on the stage and let her stand with her eyes close, while other guests at the birthday party are long awakened.

The Lilac Fairy performed by concentrated Zuzana Novoborská brings a prince to the sleeping beauty, who dances with her in his imagination before he kisses her, and the plot moves to the final scene of Act 2 – the celebration of marriage with popular characters from Perrault’s fairy tales. The scene with a wolf and multiplied Little Red Riding Hoods aka the students of the preparatory ballet school, who overpower their enemy, is rather funny. The White Cat’s banter with tomcats led from the object of their attention by a small grey mouse performed by a little boy has an unexpected and original ending.

The dancers of the Ústí ballet are definitely physically attractive, they have soft port de bras and concentration they employ in their variations. Frederika Kvačáková as Aurora is confident in the pirouettes, she is good at lifts with high elevation with her partner Máté Brünn, confident tours en l´air and can do ronds. Kvačáková enriches her role of Aurora with a heartfelt expression, but Máté Brünn does not respond emotionally. He focuses on liaisons and is not in loving contact with his chosen one. Dancers in Ústí dance with vigor and zest, and try hard to embrace the roles, accompanied by the North Bohemian Theatre Orchestra, whose favorite volume seems to be fortissimo. 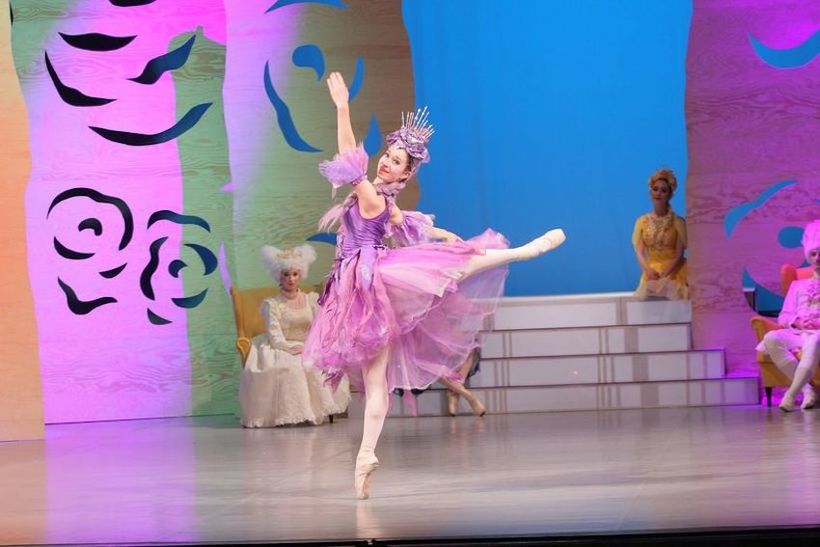 However, the intention grew bigger than the company, which rather showed the weaknesses – even though their effort to reach the professional level, The Sleeping Beauty is beyond their possibilities. The show will definitely be successful with children and their parents but for me, it is the illustration of how to not stage a ballet – to show The Sleeping Beauty as a colorful show with various dance features from the classical ones to pantomime without elaboration and technical quality. This may equal playing Beethoven’s symphony with a chamber orchestra, whose players lack the interpretation skills to perform such a complex piece. Thus, The Sleeping Beauty seems to be a wrong artistic move of the dramaturgy in Ústí, which should have used the good skills of the ballet company and not let them drown in dangerous waters.

The Czech version of this review was published on 13 March 2022.

Ballet of the North Bohemian Theatre