Rarely have I put my head back so often during a festival visit. My eyes tried to follow the movements of the performers as closely as possible, but in the case of this festival, they really took on acrobatic challenges: I observed dancers in trees, gymnastics over the roofs of factory buildings, a performer who gazed back at me upside down from a chimney, and others who seemed to risk broken limbs in a pole-climbing duet. Following the artists invitations into verticality, I engage with its multiple metaphorical associations, as they make me want to explore those special spatial geographies of MOVE fest. The ruin of Ostravica Textilia, formerly the most well-known and glamorous department store of the town, provided the space for Crows (Vrány), a performance conceptualised by Andrea Vykysalá and Karolína Křížková from the Prague-based dance company Holektiv. When inside this dusty concrete skeleton, its theatrical layout still brings back the spirit of interwar commercial interiors, recalling the buildings glory days of providing for bourgeois decor. For almost 20 years now, Ostravica Textilia stays unaroused from slumber, despite its location in the very city centre. The performance was staged in the central hall, surrounded by stepped architectures of former commercial galleries and sheltered by a romantically damaged blue ceiling. Move Fest has used this location already in previous editions. The poetic concept of the performance Crows, originally produced under pandemic restrictions for the non-theatrical environment of the Czech Museum of Music as a short dance film, remarkably fit into this desolate building, however. Šárka Říhová and Aneta Bočková performed on a ladder-like wooden pole, allowing them to enter the aerial space at the core of the building, peaking on the audience from a bird’s view. Based on folkloric tales and songs of the Moravian region, the backdrop of the ruinous building enriched Crows with a sense of melancholy and contemplation. This taste of local colouring was further enhanced by the remarkable presence and sensitive collaborative skill of Ostrava-born musician Terezie Vodička Kovalová. 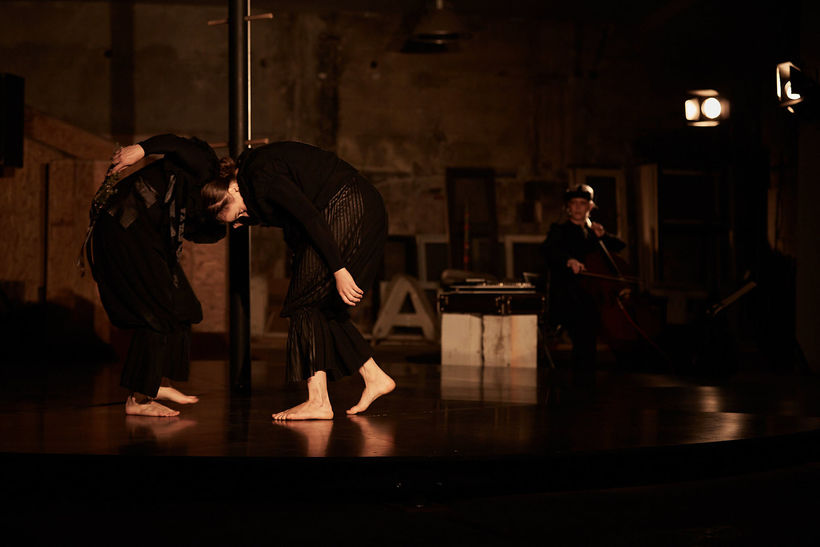 In the earlier afternoon of the same day, we experienced a performance in another well-known location of the town: As the title Passing / Station suggests, Andrej Štepita’s and Miriam Budzáková’s performance was set to happen at Ostrava’s ‘hlavní nádraží’, the main train station. In cooperation with Austrian musician Hannes Schöggl, they created a series of intimate dance scenes, a meditative duet to contrast the site’s anonymous flow of passengers. In Passing / Station, the marble floor of Ostrava’s ‘hlavní nádraží’, the main train station comes to notice as the last vestige of a heroic sentiment of socialist times, but then, the dancers’ movements really foreground the soft surface and tactile quality of the stone. The performers movements, the musical vibration and its reverberation in the space meanwhile created what we could call an island in time – a temporary refuge inside the ‘non-place’ of the train station. Interestingly, Lubor Lacina, the architect of this train station, has also been commissioned to design several state theatres in the Czech Republic, amongst them Brno’s Janáček Theatre. In regard of this historic anecdote, it is remarkable how Passing / Station, conceptually thought of by the artists as a touring piece, fit the train station as a particular location.

With Trees (stroMY) by Veronika Ghisi and Prokop Stepanek, and Hang-out by Eliška Brtnická, two works foregrounded a site-specific exploration of vertical space with the moving body.

Trees presented the outcome of a movement research on vertical or air dance. With the help of harnesses, the performers danced high up in the trees of the Komenského sady, a large green space of the inner-city next to the Ostravice river. After several months of research in various indoor spaces, they had decided to shift their attention to the natural environment. The result, Trees, combined an ecocritical approach to performance with acrobatic movement, drawing attention to the vibrancy and material agency of ecological relationships in urban settings. To mark the disruption of urban-nature, nature-culture and human-nonhuman binaries, the dancers symbolically ended their performance by planting a little tree into the ‘shared soil’ of the public park.

Eliška Brtnická’s Hang-out took place in the industrial area of the Vítkovice district, inviting the audience to the Vítkovice Steel factory, a leading European manufacturer of steel products and the largest manufacturer of steel plates in the Czech Republic. This unique opportunity of visiting a part of Ostrava’s industrial zone allowed to discover a space that otherwise remains closed to the public. Like Ghisi and Stepanek, also Brtnická received training at HAMU in Prague, specialising in non-verbal theatre. Using the format of an audio walk, she guided the audience into a utopian experience of the industrial workshop space. The narrative in the headphones, about fear and ideas about the danger of human actions, corresponded with her search of new trapeze language, a playful expression and visionary movement quality. When climbing above gates, next to industrial cranes and on the factory’s roof, Eliška Brtnická’s physical strength and risk-taking managed to make her acrobatic exercises look almost easy, allowing the audience to perceive the structures of the factory as a utopian playground. 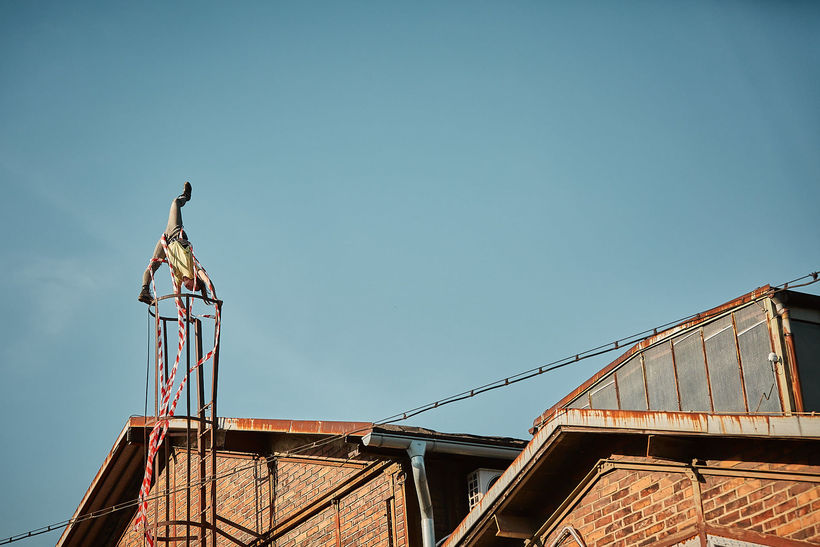 On Saturday evening, Treatment of Remembering, conceptualised by Johana Pocková ( POCKetART), was performed in the revitalised Trojhalí Karolina space. Once serving as a coal plant, it has been turned into a multifunction venue that radiates the beauty of steel hall industrial architecture. With a white platform and patches of artificial grass marking the area of the stage, the artistic endeavour can perhaps best be described as an intervention into the conditions of the location. Contrasting the post-industrial spatial setting, the performance linked the need to remember our pressing ecological duty to the fact of our 21st century mobile condition.

In its now 8th edition, the festival dramaturgically evolved around the themes of ecology and sustainability, bringing together performance makers, an international group of writers and local audiences. A majority of the performances happened in non-conventional settings, emphasising Move Fest’s relation to the city and its people. An aspect interrogated in multiple works, is the tag of the ‘site specific’, which the artists stress in relation to touring and adopting their concepts according to the distinct qualities of different settings. As mentioned above, yet another commonality is to be found in the exploration of human existence in relation to heights. The exploration of verticality is always an act of finding balance, a negotiation that involves sensations or feelings of centering, shifting weight, of being supported and lifted. Interestingly, with Crows, Trees and Hang-out, a series of works presented in this festival edition focused on the performative space in its vertical dimension. With the fear of falling always being present, the decision to enter vertical spaces artistically also suggests the acceptance of risk, a temporary embrace of a precarious state of physical reorientation.

Finally, the acceptance of such an ‘endangered physical state’ is what shaped the very condition of this year’s festival. Its 2021 edition was an ‘especially spatial’, or ‘spatially special’ one, indeed. After the closure of the Cooltour cultural centre last year, artistic director and organiser Jana Ryšlava braved the risk of putting together this ‘homeless’, decentralised edition of MOVE Fest. Hearing about her remarkable engagement, I cannot help but be reminded of a text by Paul Celan: “A man [ or woman] who walks on his head, ladies and gentlemen, a man [or woman] who walks on his [or her] head sees the sky below, as an abyss.”  In a comparable organisational somersault, Jana Ryšlava and her organisational team proved the potential that their initiative has, both for the city of Ostrava and its visitors. For the future, they therefor aim to focus on growing its international collaborations. In addition to Move Fest’s existing expansions in Košice and Valašské Meziříčí, they currently prepare a ‘chamber variant’ with Die Bäckerei in Innsbruck. Hopefully, these truly vertical visions and efforts will allow the festival to continue in the next years.

EDITORIAL NOTE:
The above text was written as part of an international writing workshop entitled Alternative Formats, aimed at developing alternative ways of writing about dance. The workshop was a collaboration between Taneční aktuality and Performing Criticism Globally and took place during Move Fest Ostrava 2021, kindly supported by EEA Grants, and the resulting texts were written in response to productions at this festival. Freda Fiala’s text Spatial geographies in a special festival edition discusses the festival from a spatial perspective.