In late May, early June, Trutnov hosted the 9th international festival of new circus Cirk-UFF, subtitled Australian Edition this year - chiefly because the programme featured two productions – Simple Space and Jelly or Jam – by the overseas company Gravity & Other Myths. In a public discussion, Libor Kasík, the director of the festival and the multi-functional space UFFO, announced a plan to open a new circus centre in Trutnov for children and professionals to train under top Australian acrobats. The Czech section of the programme did not stay behind, either. It brought life to urban spaces and helped draw the public’s attention to the festival, while creating a friendly community spirit. The main Czech programme offered such attractions as Cirk La Putyka and its show ADHD and the Losers Cirque Company’s Ego. Squadra Sua’s gangster clownery Absolutely was warmly received, as well as The Tricku Brothers’ mixed bill with which they celebrated ten years on stage. This time, Cirk-UFF indulged in humour, hyperbole and the joy of play. How to stand being on your own?

While Jan Jirák a Zuzana Drábová’s work-in-progress named Cink the Universe seemed insecure in all respects, Stéphanie N´Duhirahe and Morgane Widmer’s street version of the comedy about social networks Mezi řečí at least made the audience laugh. Had it been by accident or neatly planned, male duets did not let us down. They showed a wide range of expressive tools, black humour and clear subjects. We all asked the same question: How can we stand being together, or even being on our own?

Ego (Losers Cirque Company) is the group’s most intimate project so far. The circus duet focuses on a mature man competing with a young rival. The acrobats Petr Horníček and Jindřich Panský, fully supported by sound design, live music and a refined lighting composition, were fighting for their place in the sun. They were battling in floor acrobatics or martial arts, they excelled in zorbing spheres, on straps, or wearing high-heel shoes. In addition to top-class physical performance, they manifested beautifully overacted vanity, egotism and self-conceit. The absurd physical play Absolutely by Robert Janč and Roman Horák, built around the motif of waiting for a big hustle, highlighted the necessity of staying together at any cost. Both clowns maintained the right pace, timing of gags and expression throughout the show. The movement slapstick about two misfit companions recalled the poetics of old movie classics.

The company of bizarre beings was joined on the last day of the festival by two brothers from the mythical Gorshek plateau. The aspiring GNAT group chose wooden face masks as their main expressive tool. A fictitious legend about a buried village at the tripoint explored the feelings inflicted by long-term isolation and desire for closeness, which are hopeless and doomed. Gorshek is an interesting student experiment in which pantomime with a mask, a challenging and in our country not so common discipline, takes the lead. Šimon Pliska and Andrej Lyga invested a lot of energy into their performance, but the show lacked groove and drive. Their afternoon street gag in masks Smetáček a syn (Smetáček & Son), a miniature clownery about a family cleaning business, was much more impressive.

One of the highlights of the Czech programme was the gala night Sezóna X (Season X). In the packed UFFO theatre, the highly acclaimed duo of jugglers and masters of street theatre and situational comedy celebrated ten years of mutual collaboration. In Trutnov, they had already premiered Prasečí circus (Pig Circus) and Běžkařská odysea (Cross-country Skiing Odyssey), and performed all their productions – from Malíři (Painters) to Lov (Hunt) - at the festival. Adam Jarchovský and Václav Jelínek designed the celebration as a stock-taking of their own creations. Each number referred to a particular title and the performers’ plea for replacing the missing fellow performers sparked funny interactions with the audience. The entrance of their colleague Karolína Křížková, who responded to a call for finding a doe, put an end to random alternations. This last number made it clear that the Trick Brothers are not only unconventional object manipulators but also ever-ready partners in floor acrobatics.

Superheroes and the others

The first two nights belonged to the Cirque La Putyka troupe and their show ADHD. Based on his own experience, the director Rosťa Novák jr. plunged into the world of specific hyperkinetic disorder. The diagnosis is not portrayed as a flaw of character but as an advantage, as a gift to overcome mediocrity. The nuances of the disorder, which is being gradually detabooed in the society, were sensitively illustrated by individual circus disciplines.

Juggling with letters pointed to dyslexia, a risky choreography on roller skates represented irritability and the need of permanent temptation and adrenaline. The number with a Chinese pole, on the other hand, referred to the necessity of feeling safe and to frequent sleep disorders. The international cast gave breath-taking performances, even though the show might have seemed less fluent at times. Yet, in the end, eight heroes were standing on the round stage, relying on each other to find balance. 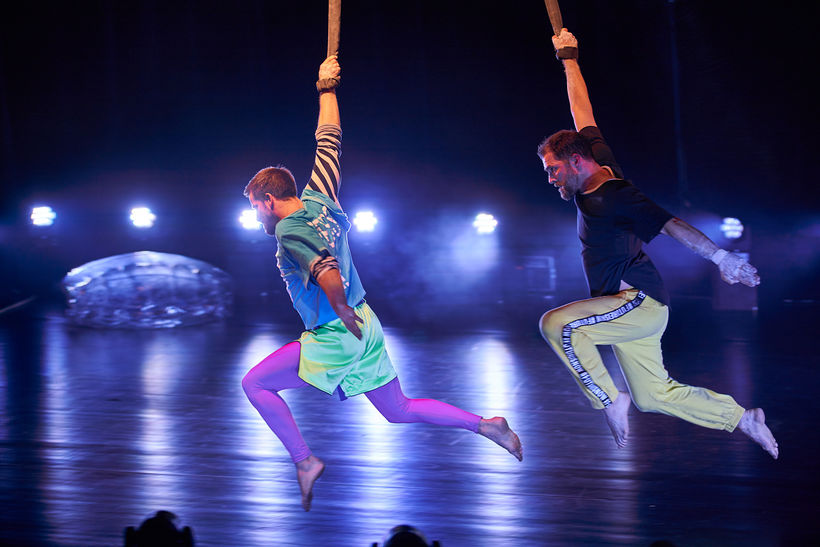 The only one-woman show at the festival was Enola by Eliška Brtnická who filled the scorched circus tent with images recalling the trauma following Hiroshima bomb attacks. The power of the piece, in which the protagonist dives into memories and consequences of the tragedy, dwelled in its impressive visual concept and aerial acrobatics.

The Cirk-UFF festival lasted five days, it hosted tens of artists and welcomed hundreds of viewers. One of the event’s key contributions to the local new circus scene is its potential to create friendly and welcoming atmosphere - a platform for meetings of local and foreign artists, where audiences feel close to the essence, close to art.

Written from the performances held within the Cirk-UFF festival, from 29 May to 2 June 2019, in Trutnov.